Masks 'strongly recommended' for grades 5-12 in Manitoba schools, but required on buses

Dr. Brent Roussin says mandating masks for schools isn't off the table. But for now, they'll only be required for students in Grade 5 and older, and only on school buses.

Shutting down schools where COVID-19 cases detected will be last resort, province says in update on plans

Manitoba students in Grade 5 and up will be required to wear non-medical masks on school buses when classes resume in fall, provincial officials say.

The province is also strongly recommending — but not mandating — the use of masks for students from grades 5 to 12 in common areas and spaces in schools where physical distancing isn't possible.

"We're going to go with a strong recommendation and follow it closely," Roussin said. "If that doesn't work, then we could mandate it."

The government will provide masks and other protective gear for school divisions to give to students and staff, Goertzen said.

If a COVID-19 case is detected at a school, closures will be considered as a last resort, and only if there is evidence of transmission among multiple groups of students or staff, Roussin said.

"We know that we need to anticipate COVID-19 cases to occur in schools, and so we've been planning in that regard," he said. "The idea is not to require the closure of an entire school, should we start to see cases."

In the event of a case at a Manitoba school, public health officials will first do contact tracing to identify any close contacts of the person and make sure those people self-isolate.

Schools will then disinfect affected areas and not use them again until they're deemed safe. Once close contacts have been identified, school communities will be notified about the case. 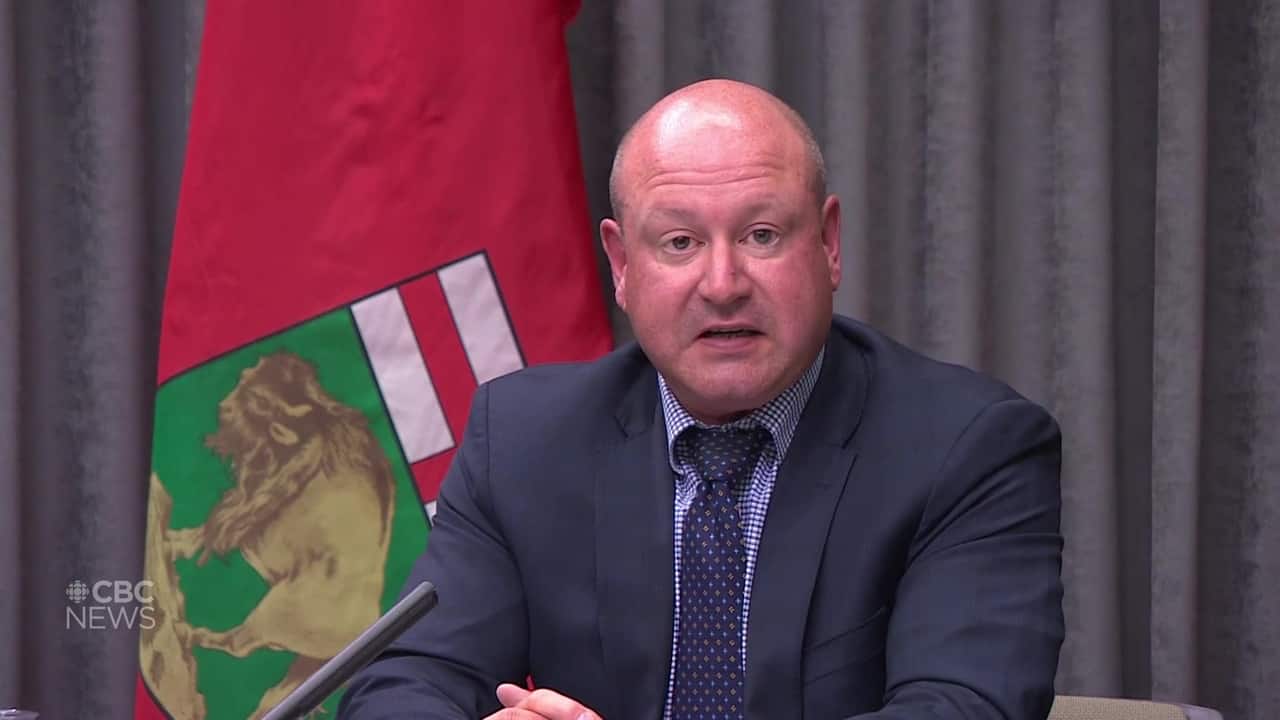 Dr. Brent Roussin explains how COVID-19 cases in schools will be handled

2 months ago
1:05
Closing an entire school will only be considered as a last resort, and only if there is evidence of transmission among multiple groups in the school, Roussin said. 1:05

Drivers on buses will also be required to wear masks, while teachers and other school staff are being advised to wear masks in common and crowded areas.

Younger students aren't being told to wear masks, but they can if their parents or caregivers want them to, provincial officials said. But people who have breathing problems, those who can't take a mask off by themselves, and children under age two shouldn't wear face masks, officials said.

Extra masks will be available throughout the year for kids who don't have them. No specific funding from the province was announced on Thursday, although the education minister said the province will pay for some items.

More cleaning, no parents in schools

There will be cases of COVID-19 in schools, but the province's back-to-school plan will make sure schools are ready to deal with them, he said.

Extra handwashing and sanitation stations will be set up and schools will need to clean commonly touched surfaces (like door handles), plus washrooms and lunchrooms, at least twice daily.

Water fountains that are not touchless will be turned off. Staff will serve all food in cafeterias, and no shared containers will be allowed in lunchrooms.

Schools are also being asked to take ventilation into account in their back-to-school plans by avoiding air recirculation and making sure filters are clean.

Schools should also increase the outdoor air ratio into HVAC systems or by opening windows. The use of fans should be minimized, and fire doors should not be opened for ventilation.

Schools will also need to schedule classes to avoid giving students spares, limit bathroom occupancy at any given time and make sure students stay in smaller cohorts when two-metre distancing isn't possible.

2 months ago
1:02
Manitoba’s education minister says parents need to prepare for how they’ll adapt to some of the “inconveniences” brought on by the pandemic, like changes to school buses and students having to stay home when sick. 1:02

Those cohorts still can't be bigger than 75 students, and different cohorts will not be allowed in the same common areas at once.

Parents should avoid visiting schools and keep their distance at dropoff and pickup times. When possible, parents are asked to drive their kids to school.

Students who do take the bus to get to class should use the same seat every day.

Parents who are uncomfortable sending their kids to school can homeschool them, but they won't be allowed to just keep them at home, Goertzen said.

For students at school, touching — such as hugs and high fives — should be avoided, the province said. Students are advised to smile and wave instead.

Toys in schools must be easy to clean. Plush toys should be avoided and touch-sensory play materials like clay will not be allowed in schools. Kids will need to have their own scissors for arts and crafts projects.

Schools will mark entrances, exits and hallways to ensure physical distancing inside the building, officials said. Recesses and lunch breaks will also have staggered start and end times.

The province did not announce any provisions limiting substitute teachers to only one school, which means they will be able to work at multiple schools when classes resume.

Physical barriers, such as plexiglass, may be used where distancing in schools is impossible, such as in reception areas. Schools will also have to make sure there's enough space between desks and tables.

Parents are reminded to screen their kids for symptoms of COVID-19 every morning and keep them home if they're sick. This doesn't apply to students who have asthma or other chronic conditions — they'll still be allowed to go to class.

Families of kids with compromised immune systems should consult with their doctor to assess whether their kids can go to school.

More specifics will be released when school divisions announce their own back-to-school plans — which some plan to do next week, while others will release plans as early as Friday.

Lamont said the option to push back school start dates should still be on the table in case school divisions don't feel prepared for the Sept. 8 start of classes.

There are also other gaps in the province's plan, like a lack of concrete funding commitments or significant mention of schools on First Nations, he said.

"That's a big black hole, especially considering some of the challenges around connectivity, homeschooling and everything else that takes place in First Nations [communities]," Lamont said.

As scientific consensus shifts on whether COVID-19 is airborne, Lamont said the province should look into using a federal program that would help them retrofit schools to improve ventilation.

"We need to do more than just hygiene theatre," he said.

Manitoba's NDP leader, meanwhile, said the province should consider all options to make sure class sizes are as small as possible come fall — even if that means not all classes take place in schools.

"There's a lot of unused social halls, churches, community centres that could be put to use as temporary classroom spaces right now," Opposition leader Wab Kinew said at a news conference late Thursday morning, shortly before the province announced its back-to-school plans.

"We could guarantee that class sizes remain small, that students remain physically distanced and that everybody feels safe sending their kids back to school."