Manitoba unveiled a new colour-coded system Wednesday that will allow government to roll out COVID-19 restrictions targeting specific regions, communities or industries in the province.

New system lays out range of restrictions that can be imposed at provincial, regional and local levels

Manitoba unveiled a new colour-coded system Wednesday that will allow the government to roll out COVID-19 restrictions targeting specific regions, communities or industries in the province.

The new system has four risk levels, each triggering possible measures that public health officials can take to limit spread of the virus.

"We wanted the messaging to be simple and flexible and responsive. We think this does just that," Chief Provincial Public Health Officer Dr. Brent Roussin at a Wednesday news conference.

With this new system, the province hopes to focus restrictions on specific areas or sectors, rather than rolling them out across the province and impacting the broader economy.

"We need to find a way to live with this virus without requiring widespread shutdowns," Roussin said.

Similar to the existing forest-fire risk system, the pandemic response tool uses the colours green, yellow, orange and red. At each level, public health officials have a range of restrictions that could be imposed on different sectors, such as schools, restaurants, child-care centres and community gatherings. 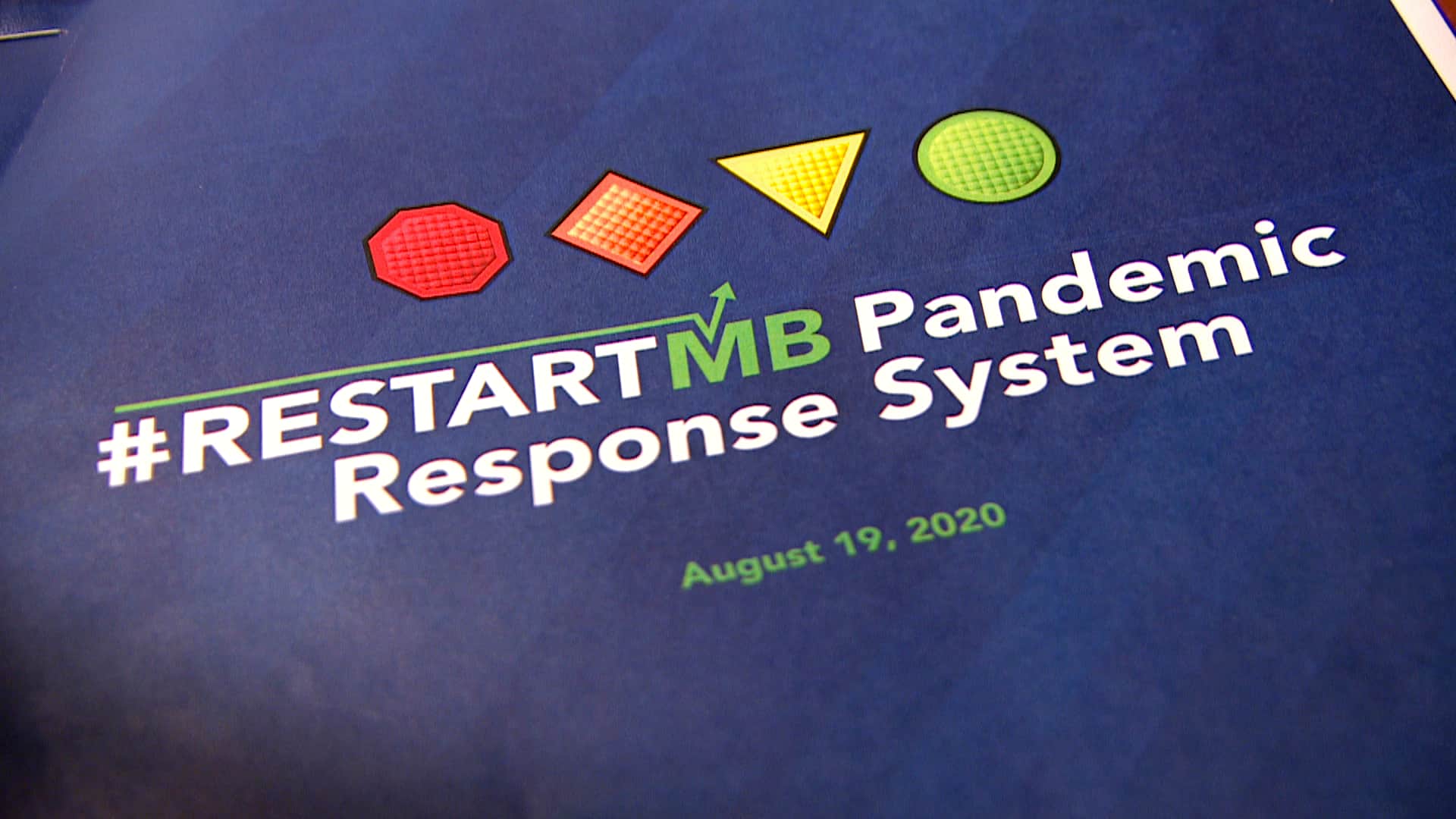 3 months agoVideo
1:54
The province unveiled a new colour-coded system Wednesday that will allow the government to roll out COVID-19 restrictions targeting specific regions, communities or industries in Manitoba. 1:54

As risk levels rise in a community or region, the province could tighten restrictions, such as reducing the size of gatherings or restricting travel in and out of an area.

"We've ... heard clearly from Manitobans that they want clear, consistent direction from public health about what they need to do and what they should expect from others," Roussin said.

Information about current risk levels and restrictions will be available on the province's website.

Manitoba as a whole is currently under the yellow "caution" risk level, meaning community transmission of COVID-19 is considered to be at low levels.

The yellow level includes many restrictions Manitobans are already familiar with, such as limits on gathering sizes, restrictions on people returning from out of province, and directions to practise good hygiene and physical distancing.

The orange, or "restricted," level is intended to be used when health officials see evidence of community transmission, but new clusters can be contained with self-isolation, and the health-care system is able to handle the caseloads.

The highest risk level, red or "critical," means there is extensive community transmission and clusters of COVID-19 that are not contained, and the cases are putting strain on the health system.

In order to reach the lowest level — green, or "limited risk" — spread of COVID-19 would have to be broadly contained and a vaccine or viable treatment for the disease would have to be available.

Risk levels higher than "yellow" are already either in effect, or being considered, in some areas within the province.

Health officials are closely watching the city of Brandon, where a cluster has grown to include dozens of COVID-19 cases, with some evidence of community spread. The risk level could be raised to orange, or "restricted," in Manitoba's second-largest city, Roussin said.

Also, the Bethesda Place personal care home in Steinbach, Man., is listed as red, or "critical," after one person tested positive earlier this week. The province has declared an outbreak there, and additional visitor restrictions are in place. Under normal circumstances, public health officials require more than one case to declare an outbreak, but the decision was made in this case due to the severity of the COVID-19.

Opposition NDP Leader Wab Kinew said the new colour-coded system is "fine," but questioned why more wasn't already being done to respond to outbreaks in places like Brandon.

"We have a very serious situation in Brandon, and yet we don't have any additional precautions being put in place to protect those folks," he said at a news conference.

Generally speaking, no one indicator will be used to determine whether restrictions should be increased or eased, Pallister and Roussin said. There are multiple factors health officials will consider.

For example, a test-positivity rate — a rolling five-day average of how many COVID-19 tests come back positive — of two or three per cent would be considered higher risk.

Other factors that could indicate higher or lower risk include rapidly increasing case numbers, and whether contact tracing links new cases to known clusters or community transmission.

Cases of the disease caused by the new coronavirus have increased sharply in Manitoba over the last month, with rising numbers of infections in multiple communities across the province, including a cluster of more than 60 cases in Brandon.

The new system builds on efforts by the provincial government to make their response to the pandemic more focused and tailored to local conditions.

Last week, the province updated its online dashboard to show more details on where cases have been identified, broken into 68 districts across Manitoba: 13 in the Prairie Mountain Health region, 24 in the Southern Health region, 14 in the Interlake-Eastern region and 15 in the Northern region, plus the Winnipeg district. 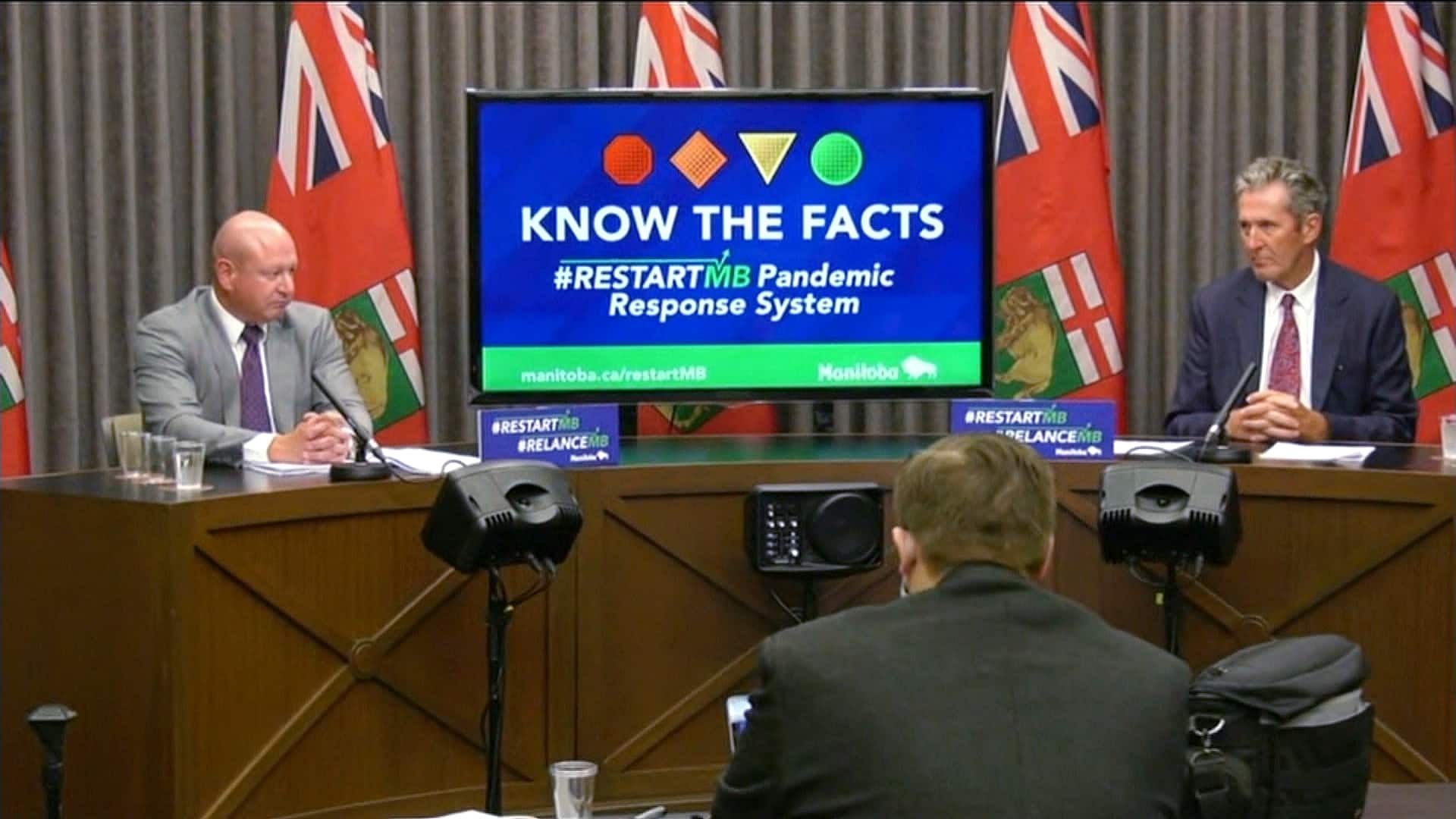 3 months agoVideo
58:05
Manitoba unveiled a new colour-coded system Wednesday that will allow the government to roll out COVID-19 restrictions targeting specific regions, communities or industries in the province. 58:05