A group of about 20 kids, ages five to 17, have been paddling the Black River all week, as part of a program helping youth in care in Manitoba communities get on the water.

A group of about 20 children, ages five to 17, squeal and cannonball off a dock into the Black River, alongside a row of empty red canoes.

They've been paddling the river all week in those canoes, as part of a program helping youth in care in Manitoba communities get on the water.

"It felt amazing.… Cool, first-time experience and that," said one 14-year-old boy, who by law can't be identified because he is in the care of child and family services.

"[It] brings people together. Have fun and go places, discover places. Explore your culture and that, go to different places, see the world. That's what I like about canoeing."

Black River First Nation is about 120 kilometres northeast of Winnipeg, along the eastern shore of Lake Winnipeg. 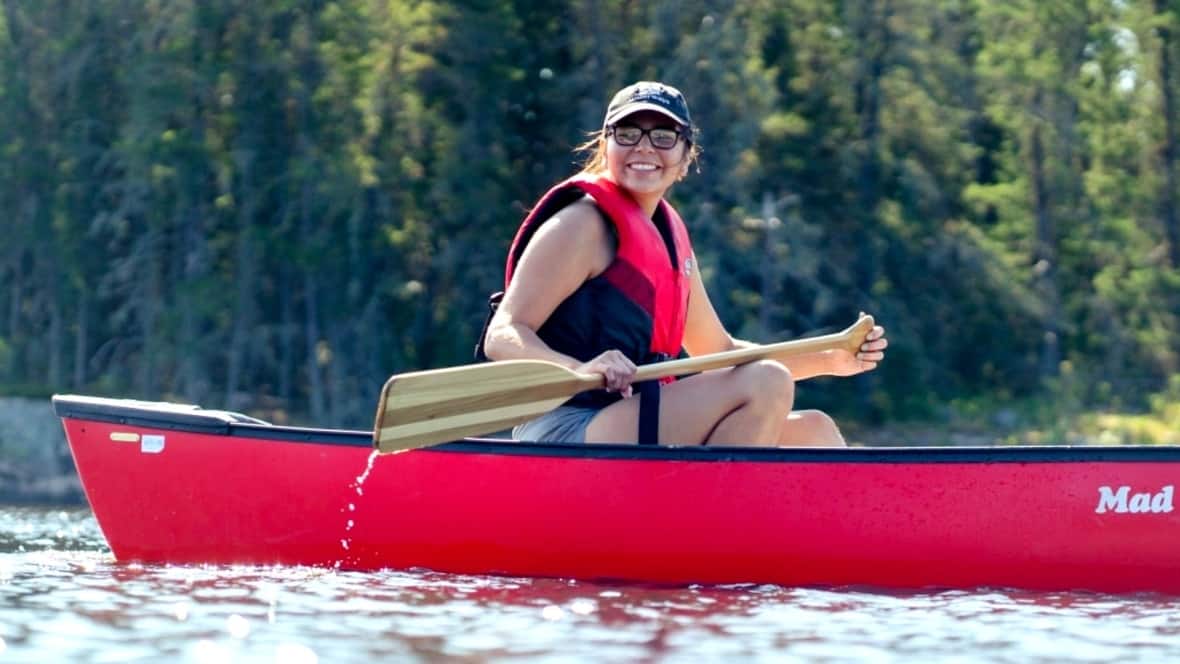 3 months agoVideo
3:36
Instructors and participants in the Waterways program talk about the impact of paddling. 3:36

"I feel like a lot of Indigenous kids especially are not represented a lot, or they don't receive a lot of opportunities," said Loryn Evans, a canoe instructor with Waterways.

Evans grew up in Pimicikamak — also called Cross Lake — in northern Manitoba, and is now enrolled as a pre-law university student in Winnipeg. Having good role models growing up made all the difference in her life, she says.

"Especially growing up on my reserve … I see the same problems that I've had [in] these kids, and that's why it's important for me to come and have them see someone like them doing work for the kids and having fun," Evans said.

Program director Tristan Schneider says the Waterways non-profit — directed by five leaders with paddling experience who work with youth in different communities — formed last fall, after discussions with young people, community leaders and elders who said they wanted to see more of these types of opportunities in their communities.

Southeast Child and Family Services provided 100 canoes and funding for the two-week camps. Though targeted toward youth in care, all children were welcome.

"There's some weeks where we'll show up and there's 40 kids waiting and then there'll be five, and over the course of the week it works its way up and then down," said Schneider.

"Some of them can get into it and they'll go for a two-hour paddle and have a great time, and other ones just wanna mess around, paddle around the docks and go swimming and that's just phenomenal.… For us the outcomes are the same," he said, laughing.

"You work with what you've got, and it's a lot of improvisation and a lot of fun."

The young participants seemed to enjoy sitting to talk with, or tease, their leaders just as much as being out on the water.

They traded words like "thank you" and "grandma" in their Ojibwe language with Evans, who speaks Cree. Several asked her to lead a smudge before they set out on the water for the second time that day.

"I have an understanding of what it's like … and I'm just here to listen to them and be their friend," said Evans.

"Some of them were calling me auntie, and it's so cute."

Back on the river, a trio of teenage boys paddled out together to an open spot where they slapped the surface of the water to startle a black bear chewing berries off a nearby tree. The entire group then travelled in a convoy upstream, pausing to watch a painted turtle before mooring to leap off rocks.

A handful of younger ones stayed behind — with supervision — to shriek and repeatedly try to climb aboard a submerged, overturned canoe.

Though most have paddled before, those who haven't seem to innately know what they're doing on the water, said Waterways director Mo Crossman-Serb, who is Métis.

"It's a traditional activity for a lot of these communities. Canoes were created and used by Anishinaabe and Cree people of Manitoba for generations and generations. It's important, I think, to play a small part in [keeping] the skills in the community," he said.

Though various paddling agencies provided funding for the program, and the group also relied on the federal government's Canada Summer Jobs program, Crossman-Serb and the other directors volunteered to get their pilot underway.

They hope next summer it can grow, so more children in the communities can out on the water.

"It's incredibly rewarding and touching," Crossman-Serb said. "Some of these kids ... have not had a privileged life whatsoever. To see them enjoy the water and stuff, it's really nice to see."