The Progressive Conservatives are splitting the health minister's job between two people during a pandemic that has sunk the popularity of Brian Pallister's government.

Premier Brian Pallister has expanded his cabinet and split the health minister's job in two as he battles a pandemic that has sunk the popularity of his government.

Heather Stefanson and Audrey Gordon now share the health portfolio, which was previously handled by Cameron Friesen, who now leads the justice department, the premier announced at a swearing-in ceremony on Tuesday.

Pallister called it a "hopeful day" after unveiling the cabinet shuffle, which featured the addition of three new faces, including Manitoba's first Black cabinet minister.

"I know the stories of these capable people.… The triumphs in their lives have not come without significant challenges," he said.

"It's a Manitoba shuffle, in a way, in the sense that we are a diverse province," Pallister said.

Stefanson, the former families minister, will take a leading role in the COVID-19 pandemic response as the minister of health and seniors.

The premier said removing Friesen from the health portfolio wasn't a reflection on his performance. He was under fire in November for accusing doctors of causing chaos when they said in a letter that the health-care system is overwhelmed.

"I've got a tremendous amount of respect for Cameron Friesen or he wouldn't be our new attorney general and justice minister," Pallister said.

The 2½ years Friesen held the position is longer than many other health ministers in Canada, and no one could have foreseen COVID-19, the premier said.

When asked if Friesen wanted out, Pallister said, "it doesn't really matter, frankly; it's what the premier wants."

In addition to Gordon, Pallister added Interlake-Gimli MLA Derek Johnson and Lac du Bonnet MLA Wayne Ewasko to his inner circle. Of the 18 cabinet ministers, six of them are women. No ministers were removed from cabinet.

While in opposition, Pallister criticized the size of the NDP's cabinet, which his government is now one person shy of reaching with 18 cabinet ministers. He's progressively added more cabinet ministers since he selected 12 after the 2016 election.

"When we first came into government, we had no one, apart from myself, who had ever served in a cabinet," Pallister said. "We didn't want to put people in positions of power and influence before they were ready."

Among other changes in the cabinet overhaul Tuesday, Cliff Cullen became the education minister, moving from the justice portfolio that now belongs to Friesen. He was described by Pallister as a "strong supporter of the public school system."

Cullen replaces Kelvin Goertzen, who now heads the Department of Legislative and Public Affairs. He also is deputy premier, a role Stefanson once held.

Rochelle Squires leads the families department. She retains her role as the minister responsible for francophone affairs.

Johnson, a former councillor in the rural municipality of St. Laurent, takes responsibility for the municipal relations file from Squires.

He said his first phone call would be to Winnipeg Mayor Brian Bowman.

"It'll be a number that he may not recognize, but I'll reach out to him and see if we can strike up our first conversation," Johnson said.

Ewasko will head the new Department of Advanced Education, Skills and Immigration, while Ralph Eichler will focus on economy recovery as the minister responsible for economic development and jobs.

All other ministers are keeping their portfolios:

This is Manitoba's first cabinet shuffle since October 2019.

The swearing-in ceremony Tuesday consisted of no audience members and only three ministers were permitted in the room at a time for physical distancing purposes.

The government has recently suffered its lowest approval ratings since the Tories took office. The blame has been attributed to the government's response to the pandemic. In the fall, COVID-19 cases were spiking and delays for test results and contact tracing lasted for days.

"The bottom line is that Mr. Pallister fired his health minister and he did so in the middle of the pandemic," Kinew said.

"That is not good for Manitoba, but unfortunately, it is a reflection of Mr. Friesen and Mr. Pallister's failings."

Some other provinces also have two health ministers. For example, in Ontario, one is dedicated to long-term care, while in British Columbia, one is focused on mental health and addictions. 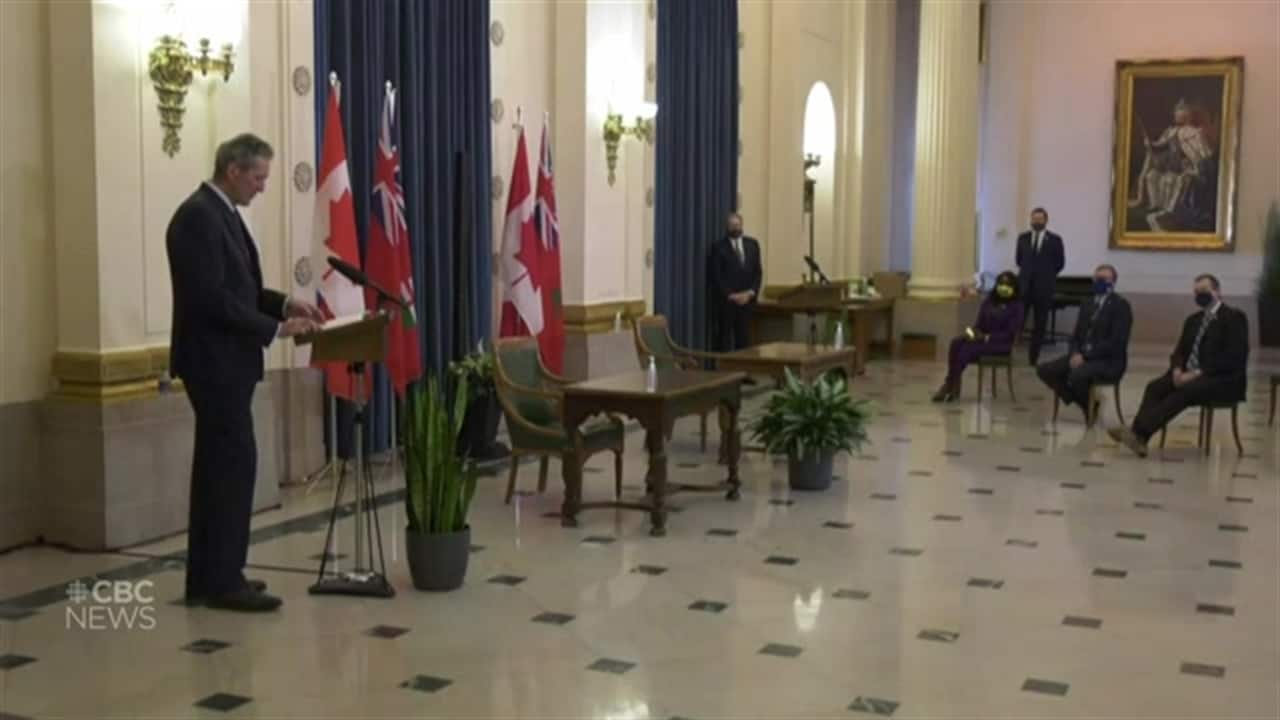 2 months ago
2:34
Premier Brian Pallister unveiled his new cabinet on Tuesday. In December, the premier said he was thinking about adding a second health minister to help cover a massive portfolio in a very difficult time. 2:34