Unease, excitement abound during Winnipeg's abnormal return to school in a pandemic

There were many students, staff and parents alike feeling a sense of trepidation on Tuesday morning as the province swung open classrooms for the first time since the pandemic shuttered in-school classes in March.

Schools embark on a slow but orderly restart, while subdued students wait their turn

He was the first boy back at his Winnipeg school — and he didn't know what to do.

Grasping his school patrol vest and flag tight, the youngster cautiously took a few steps onto the empty grounds of Principal Sparling School a half-hour before opening. The only sound was the quiet hum of a leaf-blower.

He looked at the building, then gingerly turned around and waited for someone to help him.

There were many students, staff and parents alike feeling that same trepidation on Tuesday morning as the province swung open classrooms for the first time since the COVID-19 pandemic shuttered in-school learning in March for 210,000 students.

The unease some people are feeling is expected, said Education Minister Kelvin Goertzen, who encouraged Manitobans to be optimistic about a school year unlike any other.

"I do think it's important to remember that this is the first pandemic that we've had for more than 100 years and that there hasn't been a lot of playbooks" on this, Goertzen said.

WATCH | First day of school like no other in Manitoba: 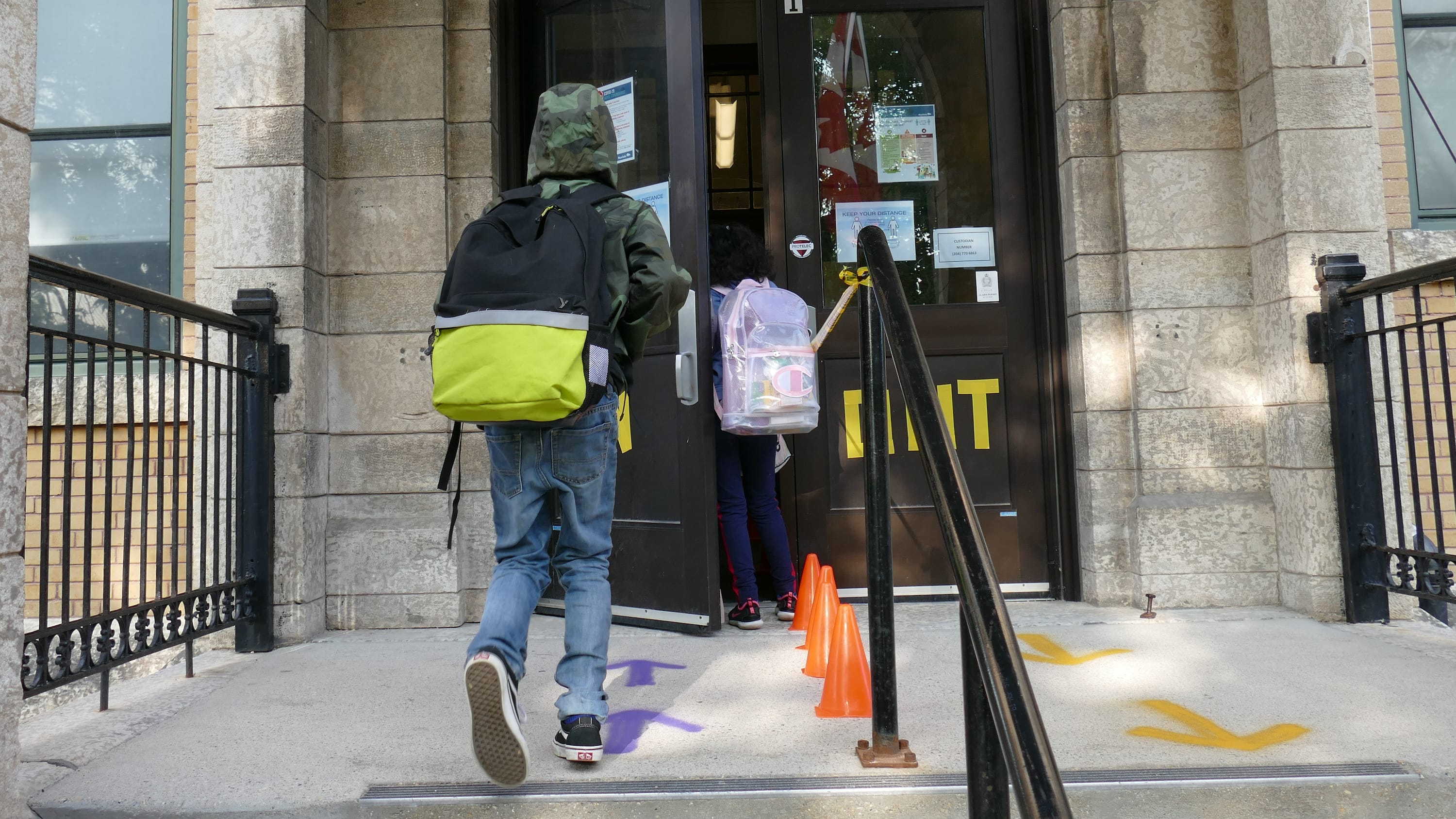 Back to school in a pandemic

3 months agoVideo
1:44
The buzzers have sounded on the first day of school for most Manitoba students. 1:44

Subdued students keep to themselves

At Principal Sparling School, the hustle and bustle otherwise customary in the minutes before class was noticeably absent on Tuesday.

It was replaced by a subdued bunch of Kindergarten to Grade 6 students, keeping to themselves and standing in one of several lines outside, guided by spray-painted markers on the ground colour-coded by classroom.

Staff made the rounds, carrying jugs of hand-sanitizer and asking each student (or their guardian) one-by-one whether they're feeling sick or experiencing any other symptom of COVID-19.

It was the parents, seemingly, who were more nervous than their children.

"He's excited about seeing his friends," said Ritchie Salenga, as his boy Yuan, wearing a Batman mask, kept as still as you can expect of a six-year-old boy.

"For five months, he's just been with me and his mom. I think kids need to socialize."

As for himself, "there's a little bit of apprehension," Salenga admitted. "I just want to see right now how it goes — the distancing, the way they will be when they're in the classroom."

The backpack lugged by Rich McKuski's daughter Averi came with new accessories this fall. She had separate pouches for clean masks and dirty masks, along with a mini bottle of disinfectant.

It's a bigger haul than she'd normally carry on her first day back to school.

"It's better to be safe than sorry, I say," McKuski said.

His Grade 4 student isn't thrilled to be wearing a mask, but he said his daughters "know exactly what is happening" with the pandemic.

"They know the precautions to take. We've been taking them ever since they've been off. They've been practicing them all summer," he said.

Mask use is only mandatory for Manitoba students in Grade 4 and above, but the vast majority of even the younger students at Principal Sparling were donning a face covering.

In a line of 11 students from Grade 1, every child was wearing a mask but one.

Catherine Viray said it was about safety for her son, Jcallix. The mother's back-to-school instructions also included orders to stay apart from his best friends.

"High fives and no hugs," Viray said, adding her son was saying hello with a wave.

Principal Lionel Pang was pleased with the orderly entrance into the school.

"Being educators of children, we know that it'll take the children probably two or three weeks and then it will become their new normal."

Pang said students will adapt to spaced-out desks, staggered recesses and what he's calling "mask breaks" — a quick jaunt outside for students to briefly remove their masks.

Other schools also ushered in students in a slow but civilized fashion.

Arriving at different entrances and at different times, students at Churchill High School in Winnipeg were queued in a single line, and welcomed one-by-one where they were greeted and answered a series of health questions, if they hadn't already answered them at home.

Then they followed designated lanes into their respective classrooms. Nobody was lingering in the hallways.

The only noticeable hiccups were students arriving at the wrong door — or on the wrong day (high school students at Churchill are alternating days between classroom and home learning.)

Grade 12 student Rose Steinbusch is feeling good about the return to school, as long as everyone follows the necessary precautions.

"I'm concerned that people will kind of take it as a joke sometimes, because you know how teenagers are," Steinbusch said.

"But I hope they take it seriously — I'm sure they will."

Those lessons will be shared from the front of the classroom. The first day will involve teaching her high school students about the peculiar, pandemic-era rules, said English teacher Hailey Unger.

"I think that everything we've put in place, it makes me feel really comfortable as a teacher," she said.

"And I mean, as long as the students are feeling comfortable, that's the biggest thing, right?"