Manitoba's minister of aboriginal and northern affairs is defending himself amid allegations from a First Nation chief who says his band was promised a work contract if they supported Premier Greg Selinger. 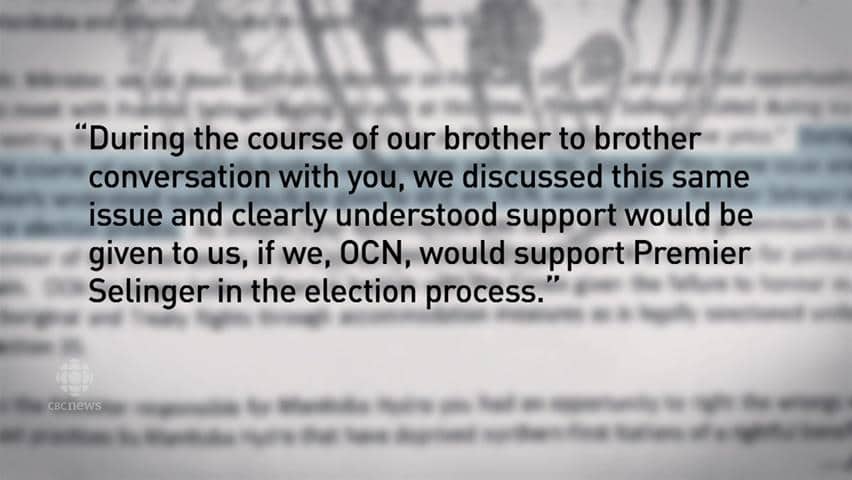 5 years agoVideo
1:59
Manitoba's minister of aboriginal and northern affairs is defending himself amid allegations from a First Nation chief who says his band was promised a work contract if they supported Premier Greg Selinger. 1:59

Manitoba's minister of aboriginal and northern affairs is defending himself amid allegations from a First Nation chief who says his band was promised a work contract if they supported Premier Greg Selinger.

The letter follows a closed-door meeting between Constant and Robinson in OCN territory on Feb. 19. Constant wrote he also met with Selinger "during his visit at this time."

When you shake somebody's hand you think they would pull through, right?- OCN Chief Michael Constant

In his letter to Robinson, Constant wrote after the meetings he "clearly understood support would be given to us if we, OCN, would support Premier Selinger in the election process."

The "support" Constant said he was promised, in exchange for supporting Selinger, was for a bid to get a Bipole III Transmission Line work contract for construction that Manitoba Hydro was to do through OCN territory.

"That was the impression of the council, that was what we thought we were hearing at the time, but it didn't happen," said Chief Constant on the phone from OCN.

Later in the interview, Constant said his agreement with Selinger and Robinson was not a deal, "it was just an understanding," he said.

"When you make a mutual agreement, a mutual understanding with government, when you shake somebody's hand you think they would pull through, right?" Constant said.

In the letter, Constant wrote his band's development arm, Pawasaw Joint Venture (PJV), was not the successful bidder for the work and as a result they would be taking action against the transmission line construction.

"Given the failure on the part of the government to uphold our rights and interests we will be using any and all means necessary to ensure that the Bipole III does not cross OCN traditional territories without both Manitoba and Manitoba Hydro knowing that we do not take kindly to having our rights trampled," Constant wrote.

Despite the action Constant threatened in the letter, the OCN chief said he has backed off the idea of blocking hydro development.

"Probably not," Constant said in a phone interview with CBC News about taking legal action against the government or blocking the line's construction. "I'm going to give it another kick here to see if we can get something from Hydro."

"I still communicate with Selinger, but it's still unfinished business, I feel," Constant said.

When approached about Constant's allegations, Eric Robinson's office produced its own letter written to Chief Constant dated May 4.

In the minister's letter, Robinson wrote he was "disappointed and troubled by the correspondence of April 21, 2015, which makes several inaccurate statements and allegations that I can only assume are motivated by disappointment related to the Pawasaw Joint Venture's unsuccessful Request for Pre-qualification (RFPQ) submission to Manitoba Hydro."

In an interview with CBC, Robinson denied promising the work in exchange for support for Selinger.

"That is absolutely not right. That's inaccurate and no such things were said," Robinson said.

Robinson said the evaluation process for RFPQ submissions are conducted solely by Manitoba Hydro, and he never would have gotten involved.

"That is certainly wrong because [Constant] understands, and I understand, that I have no influence what-so-ever in the awarding of these contracts and the company and their proposal was dead last," said Robinson.

Robinson said other than the letters, neither party has any proof of an agreement involving the project.

"It's my word against his word and my honour and his honour are at question here," Robinson said.

Robinson also pointed to the fact that Chief Michael Constant's letter was not signed by Constant.

In CBC News' interview with Constant, he stood by the letter, but could not be reached for further comment about why someone else signed the letter in his place.

Chief Constant said the "election process" he was referring to in the letter was the provincial election in April.

But the Feb. 19 meeting between Robinson and Constant took place just weeks before the NDP Leadership election, in which Greg Selinger narrowly fended off two challengers to lead the NDP into the next election.

One of the challengers, MLA Steve Ashton, has traditionally received extensive support from The Pas constituency, which OCN belongs to.

The Pas contained the largest amount of potential NDP delegates who could vote in the election of any constituency in Manitoba.

Manitoba Hydro said Forbes Bros. Ltd. passed the RFPQ for the project and went on to be the successful bidder for the work.

Powell said the value of the construction project was more than $300 million and said it would now be up to Forbes Bros. Ltd. to determine how many workers would be needed to complete it.

For OCN's RFPQ, it partnered with a South Korean company, Samyoung.

Powell said Samyoung did not have the required experience in North America to pass the requirement process and had never worked on a transmission line longer than 100 kilometres.

Powell also said the company's experience with things, such as environmental compliance, was not sufficient to qualify.

Hyrdo's manager of public affairs said the decision to disqualify OCN's RFPQ was Hydro's alone and Powell would not weigh in on any correspondence between OCN and Robinson.

"If they've had some conversation with the province, you'd have to speak to them. I can't speak to that," Powell said.