There were cheers and selfies and bursts of confetti at Tory headquarters in Winnipeg on Tuesday as Brian Pallister cruised to another majority government in Manitoba. But the celebration was subdued because the outcome of the vote — held a year ahead of schedule — was never really in doubt.

The outcome was never in question. That's why the PC celebration was subdued

When you call an election one year early, it's like running in a race where you hold the starter's pistol.

Finish anything but first, and you look foolish. Win, and you surprise nobody.

That's why Tuesday night's election victory by Manitoba's Progressive Conservatives felt more like a four-year contract extension for Premier Brian Pallister than it did a jubilant achievement.

There were cheers and selfies and bursts of confetti at Tory headquarters at Canad Inns Polo Park. People drank beer and ate cold cuts, as people tend to do in rectangular convention halls.

There was even a victory speech by Pallister, albeit an abbreviated one. It clocked in at seven minutes and 22 seconds, featured recycled campaign clichés and offered no hints as to what the PCs have planned for Manitoba, over and above what was promised by the party during the 29-day summer campaign.

In a sense, it was fitting to hear such a short address at the conclusion of a re-election campaign held only three years, four months and three weeks after Pallister's inaugural victory in 2016.

But the relatively subdued nature of the overall celebration was more a reflection of the premier himself. Brian Pallister is nothing if not strategic: He saw a relatively easy way to extend his party's mandate and he seized the opportunity. And when he achieved that objective, he didn't peacock around as if he had just fielded a punt deep in his own end and broke 12 tackles on his way to a touchdown.

Pallister's second victory was more like a series of short running plays, assisted by weak plays by the opposing team and culminating in a quarterback sneak from the one-yard line. 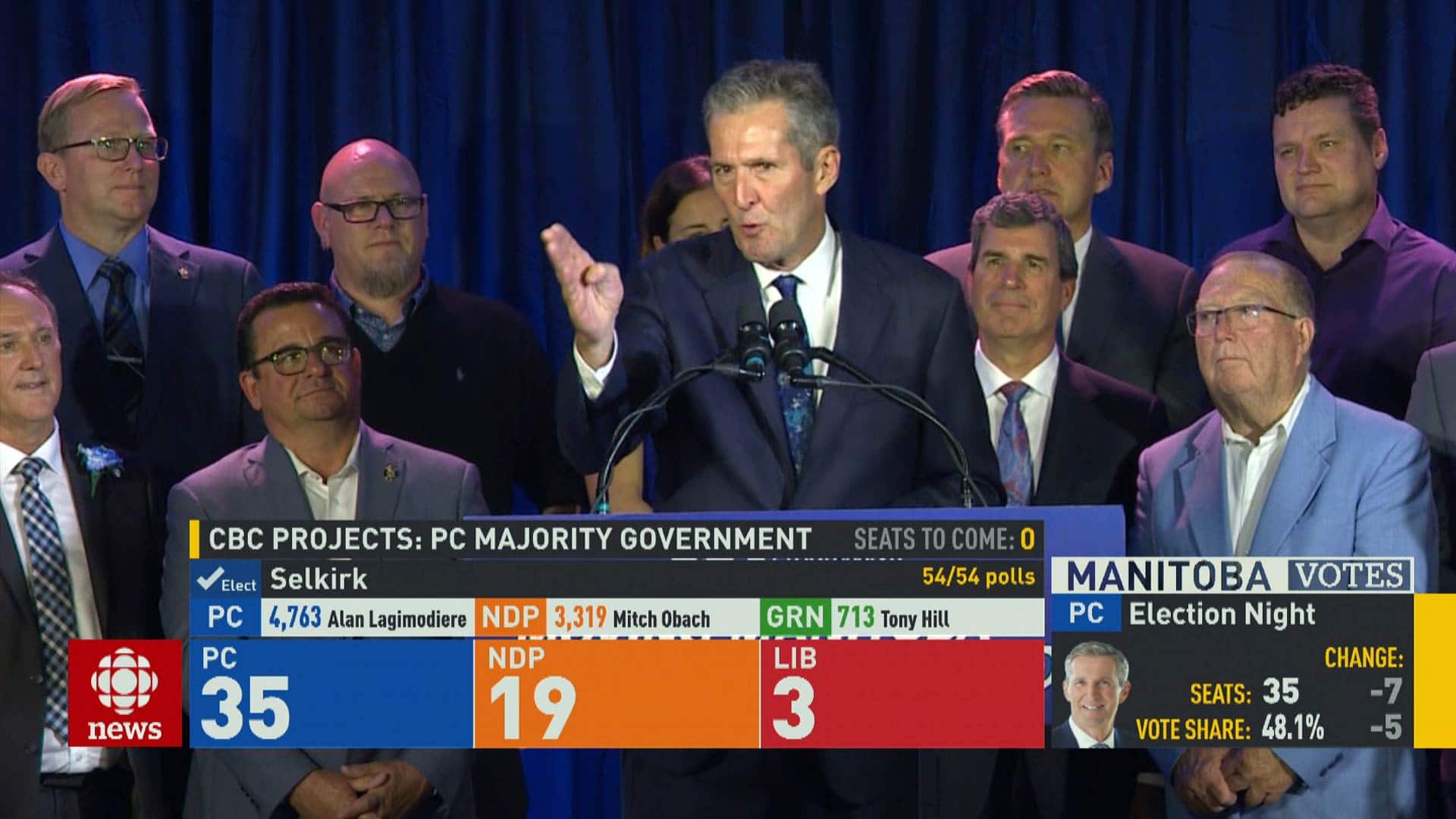 1 year agoVideo
1:32
PC Leader praises province's past - but says his team is also looking to the future. 1:32

Already, the Pallister Tories are one of the most successful governments in provincial history, on the basis of seat counts alone.

This is a leader who sought election in 2016 on a promise to engage in the unglamourous task of repealing a provincial-sales-tax hike and trying to balance the provincial books. This is also a leader who campaigned for re-election on a promise of additional tax relief, the most significant being a pledge to stop funding education through provincial property taxes by 2033, when someone other than Pallister will be Manitoba's premier.

Pallister also promised in this election to end restrictions on Sunday and holiday shopping and reiterated previous plans to see through reviews of the provincial education system and Manitoba Hydro. He also pledged to spend more on health care, hire more nurses and employ more paramedics in announcements that served to blunt NDP criticism of the PC-led restructuring of Manitoba's health-care system.

What Manitobans decided on Tuesday is they're completely cool with the leadership of a financial manager who is content to perpetuate an image as a less-than-popular guy who nonetheless does the right thing.

The alternatives to Pallister proved even less appealing to Manitobans. No matter how many times NDP Leader Wab Kinew uttered the words "health care," he could not convince voters he was capable of improving it.

By expanding his party's footprint in the Manitoba legislature from 12 to 18 seats, Kinew all but guaranteed he will survive a mandatory NDP leadership review.

The PCs may very well be pleased, as this will guarantee another election where their main opponent is a Kinew-led NDP. This also places Kinew along the same path as Gary Doer, who took four kicks at the electoral can before he delivered an election victory for the Manitoba New Democrats.

Liberal Leader Dougald Lamont also failed to connect with many Manitobans, much the same way nearly three decades worth of Liberal leaders did before him. His party's central message seemed undecipherable; calling your team an alternative to the Tories and NDP is not enough to become that alternative.

The Manitoba Greens, meanwhile, can return to their penchant for not existing in between elections.

Instead of euphoria, Manitoba awoke Wednesday to another election. Unpopular Liberal Leader Justin Trudeau is seeking re-election in a field that includes an almost equally unpopular Tory leader, a relatively invisible NDP leader, a very-long-serving Green leader and an upstart party looking to make a mark.

After his Manitoba-election victory speech, Brian Pallister was asked whether he would campaign for federal Conservative Leader Andrew Scheer.

The premier didn't quite answer that question, either.