Winnipeg police say a man stole a chainsaw from a pair of arborists, threatened them with it, then swung the running saw at several passing cars and one cyclist on Wednesday afternoon on the edge of the city’s South Point Douglas neighbourhood. There were no injuries reported.

36-year-old charged with six offences, including assault with a weapon, uttering threats, theft

A Winnipeg man was arrested on Wednesday afternoon after police say he stole a chainsaw from a pair of arborists, threatened them with it, and then swung the running saw at several passing cars and a cyclist on the edge of the city's South Point Douglas neighbourhood.

In a Thursday news release, the Winnipeg Police Service said the bizarre incident started around 12:30 p.m., when the man approached the arborists, who were working in the area of Disraeli Freeway and Lily Street, and started talking to them.

Police say the man suddenly and without reason began threatening the arborists with what they described as "an unknown large metal disc-like object." The man then picked up a chainsaw the arborists had nearby and started walking around with it.

Watch video shot by the arborists: 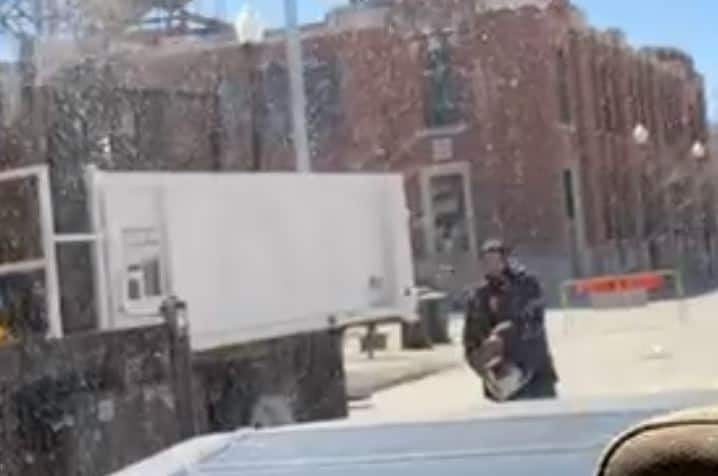 10 months ago
0:09
A man wielding a chainsaw is seen through the back window of a pickup on Wednesday. (Nick Stewart/Green Drop) 0:09 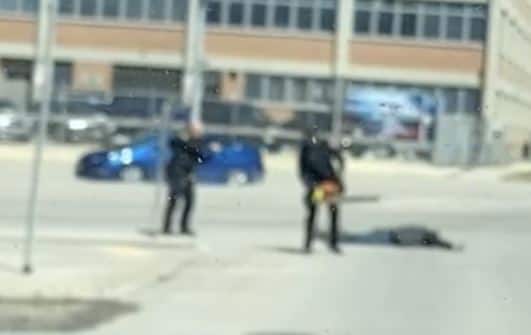 Murray said that's when the 911 call came in.

Police said the man then walked over to the Disraeli Freeway and started swinging the running saw at passing cars and one cyclist, but did not hit any of them.

"It was described that he was waving it around wildly," Murray said. "Fortunately, these are very, very rare incidences. It's not something that we see often."

The release said the man still had the running saw when police arrived. Murray said the man initially didn't listen when officers asked him to put the chainsaw down, so police pointed their guns at him. He said the man eventually put down the saw, which was still running, and was handcuffed and safely taken into custody.

No injuries were reported.

Murray said there were several people around who saw the incident unfold.

A 36-year-old man is charged with two counts each of assault with a weapon and uttering threats to cause death or bodily harm. He is also charged with one count each of theft under $5,000 and mischief under $5,000.

Murray said police still aren't sure what prompted the incident, or whether alcohol, drugs or a mental health crisis may have been involved. He said the man was known to police before the chainsaw incident.

"It's still part of our investigation moving forward," he said. "Nonetheless, a very terrifying incident for anyone that was involved, especially those two workers."