After six years, the Main Street Project van patrol is back on the streets to help people sleeping outside find shelter and stay warm. They’ve joined forces with the Downtown Winnipeg BIZ Community Homeless Assistance Team to cruise the city’s North End and downtown streets overnight. 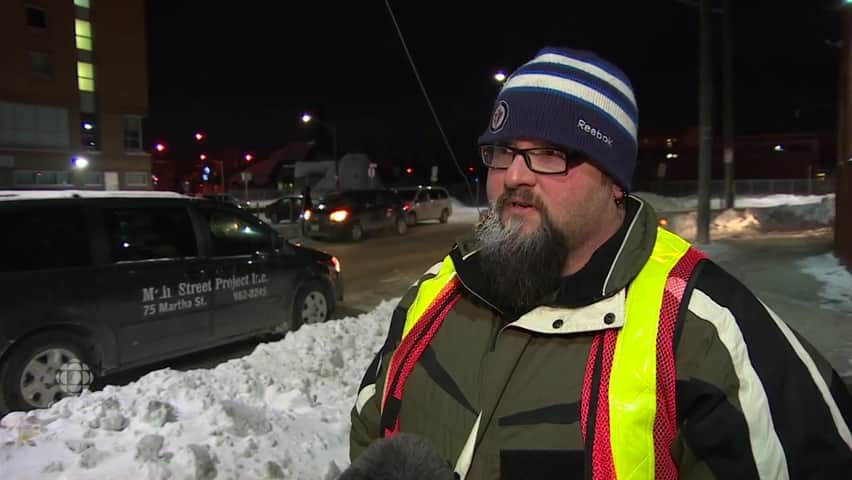 The Main Street Project van patrol is back on the streets to help people sleeping outside find shelter and stay warm.

"We're looking for people who look like they've … bunkered down for the night, and [we] get them back inside to our shelter where they can sleep inside in the warmth," said Chris Dvorak, a homeless outreach worker with the Main Street Project.

"People who are in distress because of the weather, improperly dressed, huddling beside buildings, under stairwells, sleeping outside."

Temperatures have been hovering around –20 C for days, and the wind chill makes it feel colder.

Out again after 6 years

The patrol is out for the first time in six years and invited the CBC along for the ride. The Main Street Project used to send the van out every night, but then had to put the patrol's funding toward other programs.

"We don't have enough money to keep this going nightly, though there is a need," said Christy Loudon, outreach coordinator with the Downtown Winnipeg Biz's Community Homeless Assistance Team (C.H.A.T.).

She says after a 53-year-old woman was found dead over the weekend, a number of local support agencies got together to figure out how to best meet the emergency need for people left out in the cold.

The Downtown Winnipeg Biz will fund the outreach van every night this week and on an emergency basis going forward, when the weather is extreme.

"We had to pop into emergency response, so we're just trying to service this immediate need," Loudon said.

The van is staffed with one outreach worker from Main Street Project and one from the C.H.A.T.  Both members are trained in complex case management and harm reduction.

During CBC's ride-along, team member Jowell Richardson, who works for C.H.A.T. and Siloam Mission, says she knows of a stairwell she thinks should be checked out. So they cruise down a vacant street lined with boarded-up buildings.

There is movement in a pile of blankets beneath the stairs. They stop the van, get out and crouch down to call to the person beneath the mound.

An elderly man is curled up in a snowsuit. They ask him if he wants to come to shelter. He politely declines, saying he is warm enough.

"I think a lot of people are too proud to ask for the help and refuse the help when it's offered to them," says Dvorak.

The van carries hot coffee and a stockpile of hats, mitts, coats and scarves, which is plan B when people refuse the offer of a warm bed.

"They've been living on the streets for many years, and they're comfortable and resourceful and resilient, and they feel that they're OK in the situation that they're in," Dvorak says.

"It's heartbreaking in a city as big as Winnipeg. With as many luxuries as we experience in the city, it's very disheartening that there are people living outside in these conditions."

During the ride-along, the duo spots a man picking up cigarette butts and stops to give him coffee and a pair of gloves.

Ryan Martin used to be homeless, but now has a place of his own on Cumberland Avenue.

"I really, really appreciate it, guys. Thank you, thank you," he says.

He chats with the pair about his mental illness and beams at their words of support.

"The appreciation I get when I'm giving people help is appreciation I've never felt before," Dvorak says. "Mostly people are just glad that someone cared enough to check on them."

The van patrol will continue to check up on people huddled under blankets and wandering the streets until sunrise, including returning to check on the senior beneath the stairs several times before dawn.

"I'd rather wake him up a hundred times than not have him wake up at all," Dvorak says.