Some residents of Lynn Lake, Man., are worried the old mining waste that their homes are built on could be killing them, as dozens in their neighbourhood have developed cancer. 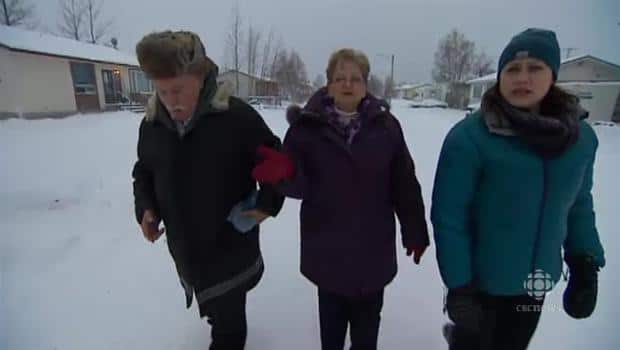 7 years ago
2:21
Some residents of Lynn Lake, Man., are worried the old mining waste that their homes are built on could be killing them, as dozens in their neighbourhood have developed cancer. CBC's Katie Nicholson reports. 2:21

Some residents of Lynn Lake, Man., are worried the old mining waste that their homes are built on could be killing them, as dozens in their neighbourhood have developed cancer.

Longtime residents Pat and Neil Campbell, who live on Eldon Avenue, estimate at least 30 people within a two-block area have been diagnosed with some form of cancer.

"Several different types of cancer. They had lung cancer, stomach cancer, throat cancer," Pat Campbell said during a recent tour of the street.

"The mother and the daughter behind us — the mother had breast cancer, the daughter had stomach cancer. She was 16 years old when she was diagnosed," she added.

The Campbells have also been dealing with cancer: Pat's colorectal cancer is in remission, while Neil is currently battling kidney and skin cancer.

Neil Campbell said he did a tally of how many people in the neighbourhood had cancer after Pat was diagnosed 15 years ago.

"In a three-square block area, I had 19 cancer cases, nine of which were terminal," he said.

"Now there's been lots more since then, me included," Neil said.

'You're just waiting in line'

Larry Skomorowski, who also lives on Eldon Avenue, said he also noticed many of his neighbours have been diagnosed with cancer.

"Sometimes you feel like you're just waiting in line."

Skomorowski and the Campbells say they believe there is an elevated cancer rate in Lynn Lake because their neighbourhood was built on top of mine tailings from the 1970s.

The subdivision was built in the early '70s, when Lynn Lake had two active mines in town and another one nearby.

The town was growing and needed to build out, so it looked to a swampy area known as Skunk Hollow and filled it in for development.

Skomorowski said he used to work in Lynn Lake's mines and at the mill, where he mixed powerful chemicals together to separate the nickel, copper and zinc from the rocks, producing a waste byproduct known as tailings.

"They took the ore and they used the tailings, the remains of it all, and they used that for the fill of the town. And that's what the houses … were built on at the time," he said.

The tailings are everywhere in the neighbourhood, said Lynn Lake Mayor James Lindsay, who captured tailings being pushed out of the ground at a children's playground in June.

"What I saw was a number of ants in the playground, digging their holes as ants do, pushing dirt up as they're digging deeper and bringing the tailings up to the surface as they extended their tunnels," he said.

"It's right in the middle of a children's playground. It's under the basketball hoops, it's over by the climbing structures…. It's all over the yard."

Tom Hutchinson, an environmental sciences professor at Trent University who studied Lynn Lake about eight years ago, says the tailings in the community likely contain several noted carcinogens such as nickel and arsenic.

But the province says it is unable "to find any data that corroborates the anecdotal stories of a higher than average cancer rate in Lynn Lake."

A government spokesperson told CBC News that a human health and environmental risk assessment was done in the area in 2002-03.

The risk assessment "determined that exposure to metals in the environment in the Town of Lynn Lake were below levels where there would be a potential concern for human health," the spokesperson stated in an email.

"This applied to all age groups, even for lifetime residents of Lynn Lake."

But Hutchinson argued that the province's assessment of the town was incomplete, adding that only an epidemiological study can rule out an elevated cancer rate.

"The human risk assessment didn't look at the people, which is, like, jaw-dropping," he said.

"They need to look at the health of the people. They need to have that clear as to what the the incidences of different types of diseases are — particularly in that case, cancers, but also the need to be looking at the body burdens of some of these metals they're exposed to," he added.

Residents say they want an epidemiological study of their town and a serious look at the local disease rate and health impacts.

Can tailings be removed?

Some residents are also calling for the tailings to be removed from Lynn Lake.

The mining company that operated in Lynn Lake no longer exists, but the companies that bought it has pledged money to clean up the mine sites.

Those cleanup efforts uncovered tailings in areas outside of Lynn Lake, but Lindsay said the companies' agreements do not cover the tailings within the town itself.

The town hall in Lynn Lake does not have any records about who decided to plow tailings into the swamp where the subdivision is now, he added.

Lindsay said the province has told him it's up to the municipality to remove tailings within the town, but he added that the small community can't afford to do that.

Skomorowski said the Manitoba government should have moved the houses in the neighbourhood years ago.

He said at this point, the uncertainty over his health and the health of those around him is scary.

"I fear for my own children, I fear for myself, I fear for my friends. It's a small community, everybody knows everyone, and it's a very, very serious matter that should have been taken care of a long time ago and it still has not been done," he said.

"It seems to be just getting ignored every time that it's brought up, and I think it all comes down to just money. Money's only paper."

With files from the CBC's Katie Nicholson