'We shouldn't be falling into a fear mode in this country,' says former foreign affairs minister

After attacks in Paris killed 129 people on Friday, Wall asked Prime Minister Justin Trudeau in a letter to suspend Canada's plan to admit 25,000 Syrian refugees before the end of the year.

"If even a small number of individuals who wish to do harm to our country are able to enter Canada as a result of a rushed refugee resettlement process, the results could be devastating," Wall's letter stated.

Axworthy disagreed and said Wall is out of his depth on this issue.

"I don't know why a premier would feel empowered to make that kind of request when he really doesn't have the information, doesn't really have the know-how … to be able to assess what are the threats and risks in the area of refugees," Axworthy said.

Axworthy, who served as foreign affairs minister under former prime minister Jean Chrétien and immigration minister under both Chrétien and Pierre Trudeau, believes Canada's vetting process for refugees is robust enough to screen out individuals who may pose a threat to security.

"We brought in over 60,000 [refugees] from Vietnam, who come out of a war-torn area. We didn't know if they were communist or Viet Cong … but we did the vetting, we flew them here, and I think it's been a terrific contribution to the country," he said.

Manitoba Progressive Conservative Leader Brian Pallister said both plans of bringing refugees into the country and concerns of national security are valid.

"We're the most welcoming province in the most welcoming country in the world, and so of course we want to help people in peril and in need," Pallister said. "We also have a primary obligation to protect the people who are here now from harm and I'm sure we can find a way to balance those two objectives – I don't see them as mutually exclusive."

'Let's not stop the program before it really gets up and running."- Lloyd Axworthy

Manitoba Premier Greg Selinger agreed that it's important to keep security concerns top of mind, but distanced himself from assertions that the process be brought to a halt altogether.

"It's obviously necessary to ensure that security is put in place, but the idea that we would cancel that right now would be a real rejection of our humanitarian impulses as a country and as a community here in Manitoba," Selinger said.

"People are excited about the opportunity to welcome more people to the province, and they will make a great contribution to our future."

'Fleeing from the same thing'

Members of the Canadian Palestinian Association of Manitoba denounced the Paris attacks, but are calling on Canada to stick to its original target of bringing in 25,000 refugees.

"Those people are victims of terror and they shouldn't be penalized because they are fleeing from the same thing that is happening," said Rana Abdulla.

"Those refugees are sitting in those refugee camps holding a lot of hope and not letting themselves fall into hopelessness, because they know that Canada will do the right thing and bring them in."

She and her husband Rafe Abdulla have been in Canada for three decades. They weren't refugees, but said they didn't have a country to call home either.

Rafe agreed that Canada should open its borders to refugees, but he also feels the long-term solution is to restore safety in Syria so people can return to their country if they so chose.

"It's not their choice; it's the jihadists choice or the terrorists choice." 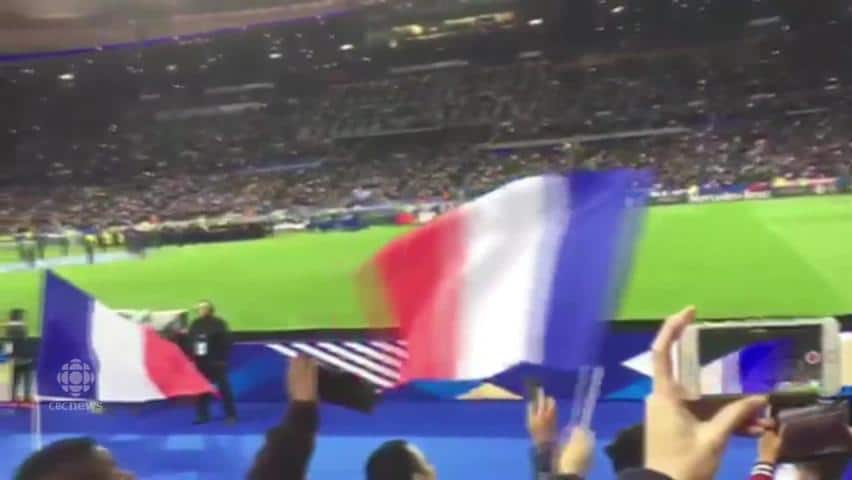 5 years agoVideo
2:04
A Kenora man who was at the Stade de France in Paris on Friday when explosions went off says he will return to the city, and the experience hasn't soured him on travelling there or anywhere else. 2:04

Meanwhile, many refugees coming out of Syria have paperwork to back up their claims, said Axworthy, adding those who don't could have relatives in other countries, including in Canada, who can vouch for their identities.

"A lot of the refugees now coming out of Syria are actually quite middle-class, professional people and have a lot of relatives in this country or in other places," he said.

"Let's not stop the program before it really gets up and running," he added. "We shouldn't be falling into a fear mode in this country."

If federal workers are not able to fully vet the 25,000 refugees before year's end, Axworthy said, the government is more likely to miss the target than rush the screening process.

Refugee initiative cannot be date/quota driven. Safety must be priority. Wrote to PM asking him to re-evaluate plan <a href="https://t.co/EumdHMefwo">pic.twitter.com/EumdHMefwo</a>