'Completely out of control': 15-year-old charged in violent robbery at Winnipeg liquor store

A 15-year-old boy has been charged with attacking a Winnipeg liquor store worker in an unprovoked attack, the latest in a string of brazen retail thefts plaguing the city.

A 15-year-old boy has been charged in connection with an unprovoked attack on a Winnipeg liquor store worker, the latest in a string of brazen retail thefts plaguing the city.

The union representing staff at the provincially owned Liquor Marts say the epidemic of thefts in Manitoba has reached a dangerous level and something urgent needs to be done.

"This situation is completely out of control, not just in our Liquor Marts but also in private retail stores, too," said Michelle Gawronsky, president of the Manitoba Government and General Employees' Union.

She called on the provincial government to bring key players to the table — including law enforcement, addictions and social services, private retailers, unions and government officials — to find a solution.

"It's going to take all of us working together to get this crisis under control," she said.

Robberies at liquor stores in the province have been spiking for more than a year, with thieves boldly swarming the aisles and filling backpacks and other bags with armloads of bottles before walking past staff, who have been warned not to intervene out of fear of attacks.

At times, staff have been threatened with weapons, including knives and pepper spray. In other cases, thieves have picked up bottles and used them as weapons, too.

But it reached a new level of violence on Wednesday afternoon in Winnipeg. 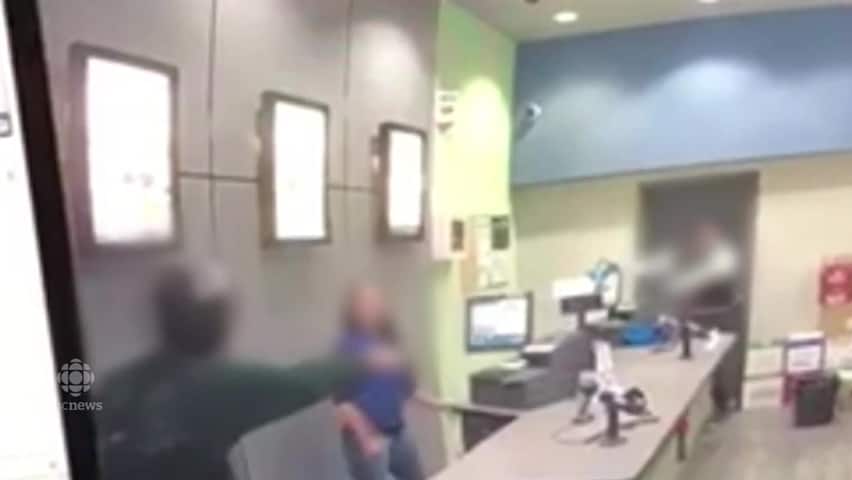 1 year ago
0:41
In a video obtained by CBC News, two people with their faces partially covered can be seen assaulting three employees at the Tyndall Park Liquor Mart on Keewatin Street and Burrows Avenue. 0:41

Police were called around 3:45 p.m. CT to the Tyndall Park Liquor Mart, on Keewatin Street and Burrows Avenue, where three employees were assaulted in an unprovoked attack at the store, Manitoba Liquor & Lotteries officials said.

Three different women were punched in the head or face, with one knocked unconscious and sent to hospital.

In a video obtained by CBC News, two people with their faces partly covered can be seen in the store. One pushes a security guard and shouts at a female employee before rushing at her and punching her, dropping her to the floor.

She then crawls to the safety of an office and closes the door.

The suspect, who police have since identified as a 15-year-old boy, then begins yelling and gesturing at another female employee, standing behind the counter. He walks over, punches her in the head.

She is the one knocked unconscious and later rushed to hospital in critical condition, police said. Sources have told CBC News she suffered a seizure in the attack.

The boy is then seen fighting with a man before the two, struggling with one another, move out of view.

At a news conference on Thursday, police said three males went into the store armed with knives and while the boy attacked the employees, the other two stole "numerous liquor products."

The woman sent to hospital has since been upgraded to stable condition but "that is not to underestimate these injuries," said Const. Rob Carver.

After leaving the liquor store, police said the boy and his two partners assaulted other people in the shopping mall.

The boy pushed his way into another business, demanded money from everyone inside and then punched a woman in the face, police said.

The victim, who did not need hospitalization, said the attack stunned her.

"For a few seconds I just got numb and my brain stopped working," she told CBC News on Thursday, noting when the boy first came in she was several feet away while other people were standing closer to the door

"I was too worried for my friends, because he was not that close to me."

But the boy quickly crossed the floor, came up behind her and punched her in the cheek. He eventually left when someone he knew grabbed his shoulders and led him out.

"I just fell [onto] the table, the computer table, and my glasses went off," said the woman, whom CBC News is not naming. "He was aggressive, very aggressive. He could have done more to us."

He was stopped by the person who came in to get him, who urged him to not do anything more, the woman said.

Once he was outside of the mall, the boy confronted a woman inside a vehicle with her daughter. He threatened them and tried to carjack the vehicle but was unsuccessful, police said.

The boy then targeted two females and tried to steal their purses, threatening to hit them with a liquor bottle while they lay on the ground.

"Just to make sure you understand, they were cowering on the ground in front of this suspect," Carver said.

At that point, several people in the area intervened and held the suspect for police.

The boy, who cannot be named under the Youth Criminal Justice Act, has been charged with 19 offences, including uttering threats to cause death. The other two males have not yet been located, Carver said.

A witness who works in the mall described the attack as "terrifying" and said the assailants just went "crazy."

Carver said during the news conference that hundreds of people have been arrested over the last few months in connection with liquor store robberies.

"We have some people dedicated to doing almost nothing but looking at video from liquor stores," he said, noting one person arrested was linked to 106 incidents and another was responsible for 47. 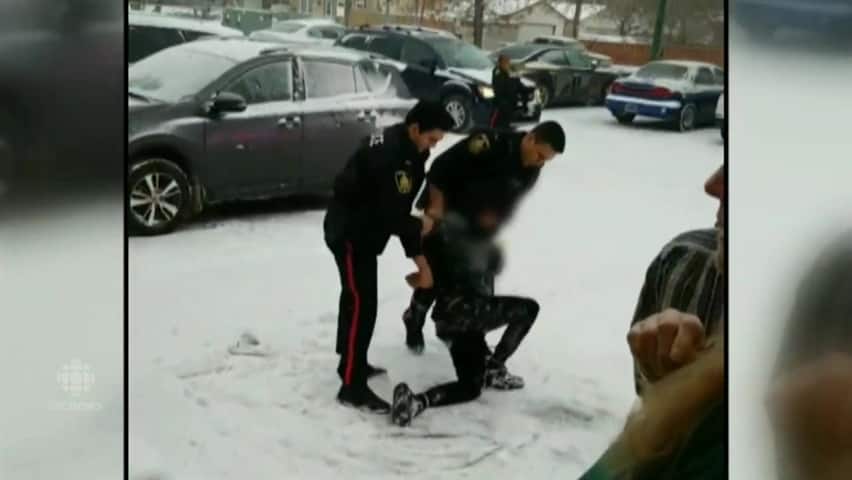 1 year ago
0:20
Winnipeg police arrest one of the suspects in Wednesday's violent robbery at the Tyndall Park Liquor Mart. 0:20

In fact, police estimate there are at least 10-20 liquor thefts across the city every day, but the number could be closer to 30, Carver said.

"We're devoting an awful lot of hours to [tracking down suspects] and we're being successful," he said, adding he and other investigators were surprised to learn the boy charged in Wednesday's robberies did not have a criminal record — particularly due to the level of violence.

Many of those arrested in connection to liquor robberies have been known to police.

The surging violence has prompted the Salvation Army to retreat from the Liquor Marts in Winnipeg.

The agency announced Thursday that its annual holiday fundraising kettles will not be set up in those stores.

"Our decision to remove these kettles sadden[s] us but the safety of our staff and volunteers is paramount," said spokesperson Blair Malazdrewich.

While the liquor robberies have been getting most of the attention, they are by no means the only businesses seeing increasing levels of violence, Carver said.

"All sorts of stores are seeing very aggressive people coming in and what used to be a shoplifting incident is turning into an armed robbery."

The Tyndall Park Liquor Mart has had several robberies, and construction was already underway on a new secure entrance when Wednesday's incident happened.

The new entries will require customers to show photo ID at a security station before they can enter.

In a statement issued Thursday, Manitoba Liquor & Lotteries said more information on the new measures, and what they will mean for customers, will be released as soon as it is ready.

"We didn't expect to be announcing this initiative so soon and we are working to pull appropriate information together to share with media while getting information for our employees, who are our first concern today," the statement said.

Manny Atwal, president and CEO of Manitoba Liquor & Lotteries, said similar secure entrances will be installed at other locations in the coming weeks.

Carver said any effort to add another barrier, such as a controlled entry, has "definite merit." Similar measures have been taken at jewelry stores and have proven successful, he said.

Gawronsky welcomes the heightened security but said the response has to go far beyond that.

"This crisis is bigger than Liquor Marts. This is a Manitoba crisis that calls for urgent provincial leadership," she said. "We're at a point now where we need to do something."

Carver said the police service is open to a summit-style meeting and senior members have already been in touch with MLL officials.

"We always want to see a collaborative multi-agency approaches to any long-term problem. I think that's always the way to solve it," he said.

"I can't comment other than to say it [a summit] would not be surprising and likely expected."