Some people living in the St. James area say many seniors are living in isolation, and Winnipeggers need to do more to help them remain socially active.

Advocates say older adults are having a hard time getting out into the community, feeling connected

Carol Goodman says it may be possible that pickleball saved her life.

"This might be a bit overboard, but it saved my life from being isolated and not having any friends, and [by] giving me an outlet from the stress of being a caregiver," she says, taking a break from running up and down the gymnasium at Sturgeon Heights Community Centre during a pickleball game.

It's just for fun, but after retiring early to take care of her ill husband, Goodman says this sport saved her from one of the biggest issues facing seniors in Winnipeg's St. James neighbourhood — social isolation.

And demographically speaking, St. James is one of the city's older neighbourhoods.

While the city has not yet broken down the 2016 census results at the electoral ward level, demographic results can be approximated by adding up the results for census tracts that fall within the St. James ward boundaries.

Based on that, 33 per cent of the population in this ward is 55 years of age or older.

This isn't news to Connie Newman, a seniors advocate who works with the Manitoba Association of Senior Centres and lives in the Silver Heights-Booth neighbourhood, part of St. James.

Part of her job is to answer calls from seniors who are looking for help getting back into the community, or people who just need a friendly voice.

"I have four people over the age of 65 that I connect with on a daily basis," she said.

"This morning I had two people phone me — one who was changing her plans because she was going to a funeral out of town, and decided she'd better let me know she wouldn't be there, just in case I was worried if the car was gone."

Newman says unless something is done to get seniors out of their homes, their well-being will suffer.

"If you're not socially connected somewhere, that means you're living in your apartment, seven days a week, 24 hours a day, not talking to anybody. What does that do to your mental health?"

The Manitoba Centre for Health Policy, a non-profit research centre at the University of Manitoba, reports that St. James scores high when it comes to social deprivation — a measurement of how socially cohesive a neighbourhood is.

One factor, they say, is the high number of older adults in St. James. The older you are, the more likely it is that you're widowed, you live alone, you're divorced — that you're essentially not as social as other people.

These numbers start showing in some seniors' behaviour, according to Meaghan Wilford, the executive director of the St. James Assiniboia 55+ Centre.

"We find a lot of people end up in the emergency room just so they have someone to talk to," she said.

"They're just really confused about what they can do, or they're unaware of the resources available to them because they don't have access to a computer, or they don't have their friends to tell them about it."

Wilford says the Centre has some programs, like pickleball, that encourage seniors to get out and be part of their community.

But Newman says that sometimes, it's just not enough.

She's also a retired educator who spent more than 30 years with the St. James-Assiniboia School Division. The seniors she works with now remind her of her teaching days in some ways, she said.

"They're scared. It's very hard for a 10-year-old to let go of Mom's hand and walk into a classroom first day by themselves if they've never been there before. It's the same thing for a 67-year-old," she said.

"And as we age and as the bones creak and the muscles get tough and sore, it's even harder."

Some ways to move forward, Newman suggests, are to support alternative and communal living situations, make seniors centres more welcoming, and — most importantly, she says — being a good neighbour.

"We need people to look to the left, look to the right. If you're going to the bank, maybe the person next door needs to go to the bank. If you don't see your neighbour for four days and there's no lights on, maybe you should be knocking at the door," she said.

"We are friendly Manitoba. Let's be friendly." 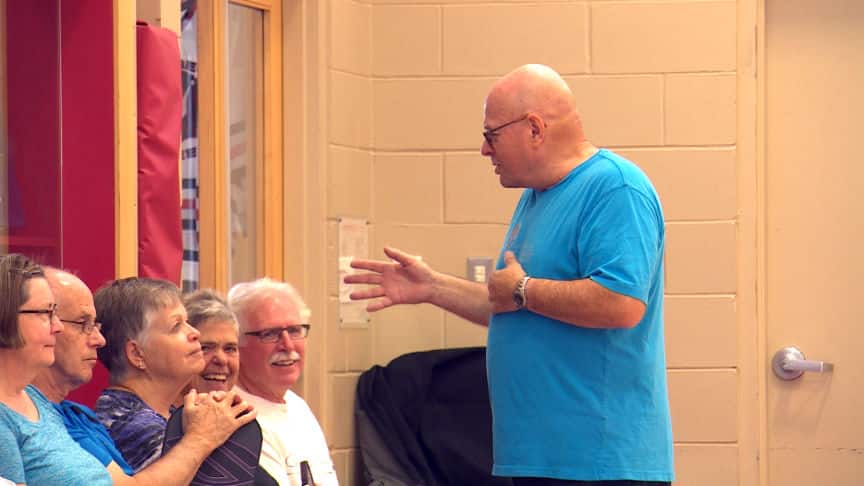 2 years agoVideo
2:05
How seniors in St. James are dealing with social isolation. 2:05

Urban Myths is a CBC series that explores Manitoba communities, their stories and the people who live them.