Lack of accessibility prompts Winnipegger with disability to move to Vancouver

Martial Caron makes the most out of Winnipeg, but the 38-year-old with cerebral palsy plans to move to Vancouver because of an accessible public transit system, milder climate and other reasons that appeal to people with physical disabilities.

Martial Caron, who has cerebral palsy, chooses Vancouver over Winnipeg when it comes to accessibility 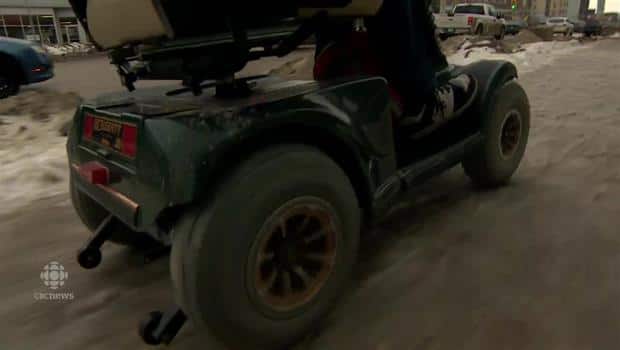 Lack of accessibility prompts Winnipegger with disability to move to Vancouver

5 years ago
2:24
Manitoba is in the midst of a multi-year plan to make the province more accessible, but it's too little too late for one Winnipeg man. 2:24

With the Winnipeg Jets trailing 0-4 at the MTS Centre, Martial Caron was willing to do anything to turn it around.

"I think I have to put on my skates," he joked. "Just one more drink."

It's true, the Jets could have used a little help, a concept with which Caron is familiar.

The 38-year-old has cerebral palsy, and despite his fierce independence and desire to be out and about, his laboured movements make him dependent on others as he gets around and engages with the community.

It's for this reason that Caron plans to move to Vancouver.

"People with disabilities come here because it is quite well known for being accessible," said Jane Dyson, the executive director of Disability Alliance B.C.

"We have a handi-direct service that is a para-transit service for people with disabilities, and then we also have quite a significant number of wheelchair-accessible taxis which work with the para-transit system to provide service."

Then there's that mild climate.

"In Vancouver and the southern parts of B.C., we quite often don't get any snow, so there's never that time when people who need mobility aids are unable to get out because of the weather," she said.

Caron uses a walker or a scooter to get around Winnipeg.

"It's hard to go up inclines," said Caron as he took on the pre-game ice along Hargrave Street.

"When it freezes it gets hard because you get these hard ruts. Two days ago, I don't think I could walk on this sidewalk. I would have had to walk on the street," he said.

While buses in Winnipeg are equipped with ramps, Caron has better public transportation experiences when he visits Vancouver.

"I have been there a few times and when you use a bus they automatically put down the ramp for me," said Caron​.

"Here it seems to be more of an inconvenience for everyone for me to use the ramp."

Counts on courtesy of others

Once at the MTS Centre, Caron moves easily through the crowds, but his overall experience depends on the courtesy of others. When he pushes his walker to the bar for a drink, he counts on thirsty fans to avoid cutting the line. If he wants popcorn at the game, someone will have to feed it to him.

"Most people are willing to help if I ask them properly or politely," he said.

Caron is a regular at Shark Club where they cut up his food for him.

At The Pint, where Caron is known to cap off his night, bouncers usher him up and down two flights of stairs and get him into a cab at the end of the night.

The downtown skywalk system plays an important role in getting Caron from one place to the next, but it has its challenges.

"A lot of the places I hang out — like Shark Club, Tavern, the arena — is all by skywalk," said Caron. "And when I'm coming from my home I walk through the Convention Centre and then go indoors. But they get shut down at 12:30, so if I'm out late I can't."

One of Caron's late-night destinations is The Pint, located on Garry Street. The skywalk exit at the Winnipeg Police Service headquarters gets him closest, but after dark, Caron must head two blocks further to Winnipeg Square, where heavy doors make it difficult to get out of the building.

"See, right now we're going out the main entrance and there's no automatic doors," he said of the skywalk exit at Fort and Graham. 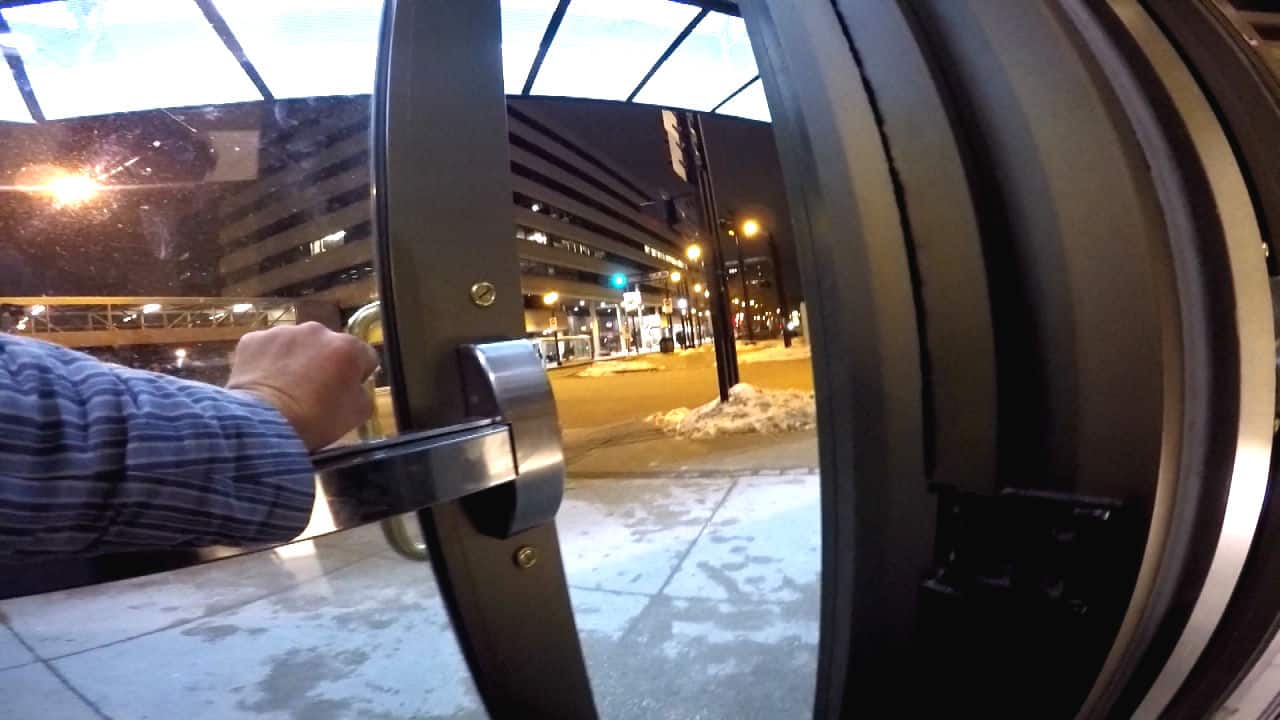 5 years ago
1:13
Martial Caron, 38, has cerebral palsy. He relies on a walker to help him move through downtown Winnipeg. Using the entrance at Fort Street and Graham Avenue to access the skywalk, he walks to The Pint on Garry Street. 1:13

According to a spokesperson with the City of Winnipeg, the skywalk structure was built in 1983 "and as such the building code would not have required the door paddles to be installed at that time."

"I used to work here for several years," said Caron. "I brought it up with the owner and they said you have to go to the one on Portage which is two blocks away. That's the stuff I don't understand."

I'm proud of who I am…. Nobody can take that away from me.- Martial Caron

"There's been traditionally a pretty strong disability community here, in part due to the critical mass that we have," she said.

"People with disabilities come here more, so we already have that critical mass of people who have access needs and speak out about them."

In Caron's mind, that critical mass can affect the mentality of the general public. His movements attract less attention when he visits Vancouver.

In Winnipeg, he said his laboured movements attract a lot of stares — something that bothered him when he was younger, but for the most part he is now able to ignore.

Caron will take that active lifestyle with him to Vancouver, once housing and employment can be secured.

Access Denied is a CBC Manitoba series exploring accessibility for people with disabilities in Winnipeg. If you have a story you want to share, email kim.kaschor@cbc.ca.

Kim Kaschor is a journalist living in Winnipeg. With roots in rural Manitoba, she has a passion for hyperlocal community issues, grassroots development and social justice. You can connect with Kim at kim.kaschor@cbc.ca.