As new Manitoba NDP Leader Wab Kinew finished his first day on the job, more details emerged about his 2003 arrests for assault and drunk driving. CBC has reviewed the audio record of Kinew's sentencing in September 2004.

As new Manitoba NDP Leader Wab Kinew finished his first day on the job Monday, more details emerged about his 2003 arrests for assault and drunk driving.

CBC has reviewed the audio record of Kinew's sentencing in September 2004.

Kinew, who was elected leader on Saturday, was 22 years old when he pleaded guilty to refusing a breath demand, assault, failing to report for bail supervision, and breaching a court-ordered curfew. Under a joint Crown and defence recommendation, Kinew was fined $1,400 for all four offences.

Kinew was first arrested in Winnipeg on Feb. 24, 2003, after he was spotted late in the evening while driving his father's 2000 Dodge Dakota erratically in the area of Hespeler Avenue and Henderson Highway.

Court heard a witness who followed Kinew for several kilometres reported he lost control of his vehicle two times after striking a guard rail and light standard on the Slaw Rebchuk bridge.

​Kinew continued to drive several more kilometres with a blown-out front tire before police caught up to him at a York Avenue parkade.

Police reported Kinew as having bloodshot eyes and slurred speech, and as being unsteady on his feet. A three-quarters empty bottle of gin that was purchased that afternoon was found in the back seat.

Taken into custody, Kinew refused to provide a breath sample.

Kinew was bound by a court recognizance on that charge when, on June 27, 2004, he was arrested following an altercation with a city taxi driver.

Court heard Kinew was intoxicated when he caught a cab near Mayfair Avenue, shortly before 5 a.m.

"The accused began to insult the [cab driver] with some racial comments which continued until the driver reached the intersection of Portage Avenue and Fort Street," the Crown told court.

While stopped at a red light, Kinew exited the vehicle, approached the driver's side door window, which was open, and punched the driver in the face.

A passerby yelled out and momentarily interrupted the assault. When the driver exited the cab, Kinew pushed him to the ground and kicked him, court heard.

Police came upon the scene and Kinew attempted to flee. Taken into custody, Kinew declined to discuss the incident.

The victim suffered a small laceration to his elbow and swelling to his face.

In his 2015 memoir The Reason You Walk, Kinew said he had grabbed a cab with friends and "hopped out without paying."

On page 70 of the book, he writes that "the driver caught up with us and pushed me. I turned around and shoved him back. A passing cabbie saw what was happening, stopped his taxi and jumped out to help his fellow driver. He swung and hit me in the face. I grabbed him and swung back.

"We stood in the middle of the street, arms flailing in full-on hockey fight mode. The police showed up and tackled me."

Court heard Kinew's problems with alcohol started sometime after he moved out of his parents' home at 19 and while he was attending university pursuing an economics degree.

"Mr. Kinew's drinking has led him into significant difficulties and played a participating role ... in each of his criminal offences," said defence lawyer Jason Miller.

Following his arrest, Kinew's parents proposed a treatment plan that would "put him back on the traditional path that he had walked previously," Miller said.

Kinew attended sweat lodges "to purify himself" and participated in a sun dance event, during which he fasted for four days and pulled buffalo skulls by piercings cut into his body.

"Suffice it to say, it shows a significant degree of commitment by the individual who attends," Miller said.

"While abstaining from alcohol, he has had no involvement in the justice system," Miller said. "He realizes this is a lifelong path he has to follow."

​"These are not episodes in my life I'm proud of," Kinew said. "I struggled with alcohol, and that caused me to behave in ways that weren't healthy for me, or those around me. When the alcohol stopped, so did the fights. Violence, racism, and sexism are unacceptable. I've apologized unequivocally, and I do so again: to anyone I harmed, I am sorry.

"Because of my past, I understand the challenges of young people in our society who are struggling with the same things I was — alcohol, addictions, anger. I know that they can do better, because I learned how to do better," Kinew said. 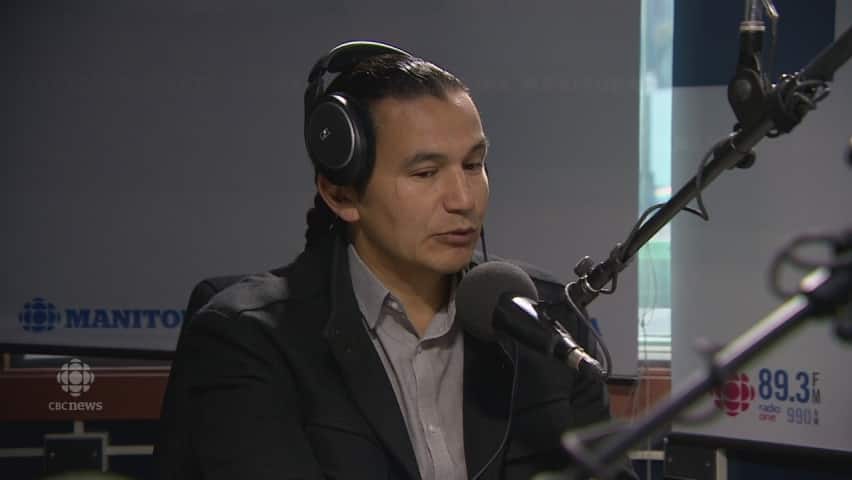 Wab Kinew says he got into politics because of his past

3 years ago
2:32
Manitoba NDP leader Wab Kinew speaks on CBC's Information Radio about how his historic win has been clouded by allegations of domestic assault and an attack-filled website from the Tories. 2:32

"I also know that the conversation around racism in our society is complex and multi-directional. I am lucky to have the opportunity to speak with people from all walks of life and want to continue to build bridges and reduce the attitudes which can separate us."

But within 30 minutes of his victory, the Progressive Conservatives launched an attack website against him.

WabOn.ca has screen grabs of past misogynistic and homophobic tweets, sent as far back as 2009, a summary of past charges of domestic assault and links to news stories and opinion columns that are critical of the rookie politician.