The roof of an indoor hockey rink recently collapsed under heaps of snow in the small Manitoba community of Kelwood, Man., just an hour after kids finished playing on the ice. 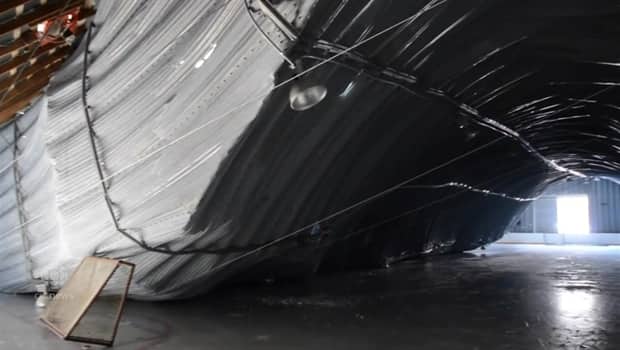 4 years agoVideo
0:59
The roof of an indoor hockey rink recently collapsed under heaps of snow in the small Manitoba community of Kelwood, Man., just an hour after kids finished playing on the ice. 0:59

The roof of an indoor hockey rink recently collapsed under heaps of snow in a small Manitoba community, just an hour after kids finished playing on the ice.

The village of Kelwood, located about 185 kilometres northwest of Winnipeg, is hoping they can find the funds to fix the damaged building.

Duane Stewart, a councillor with the rural municipality of Rosedale, said he got a call on Jan. 14 from someone saying the roof was now lying on the surface of the rink.

Stewart said the building had more than 66 centimetres of snow piled up on the roof in the weeks before it collapsed.

"They guys were getting ready to shovel it off but we didn't get there quite soon enough," Stewart said.

Children left the ice as of about 4:30 p.m. that day, and an hour later the roof came crashing down.

"No one was hurt, thank god," Stewart said.

The building was insured through the RM of Rosedale. An adjuster inspected what is left of the roof this past weekend, and Stewart says now everybody is left anxiously playing the waiting game to find out whether the community will be able to rebuild.

"We don't know where we're at with insurance," Stewart said.

He estimates it could cost between $250,000 and $400,000 to repair the building. Depending on how much money council receives, the community may have to start fundraising to make up the rest of the cost.

"It's not a big building … we certainly hope we can have another," Stewart said.

The rink played an important role in the local economy. Stewart said a recent hockey tournament raised more than $3,000 in support of the local legion.

He's hopeful everything will work out, but he says it would be a "great loss" if the community was unable to rebuild.

"There a lot of children that won't be able to skate," he said. "We're just going to have to wait and see."