Manitoba Liberal Leader Rana Bokhari says her party has cut ties with Jamie Hall, who has stepped down as the party's candidate in Southdale amid controversy surrounding social media comments that are derogatory to women. 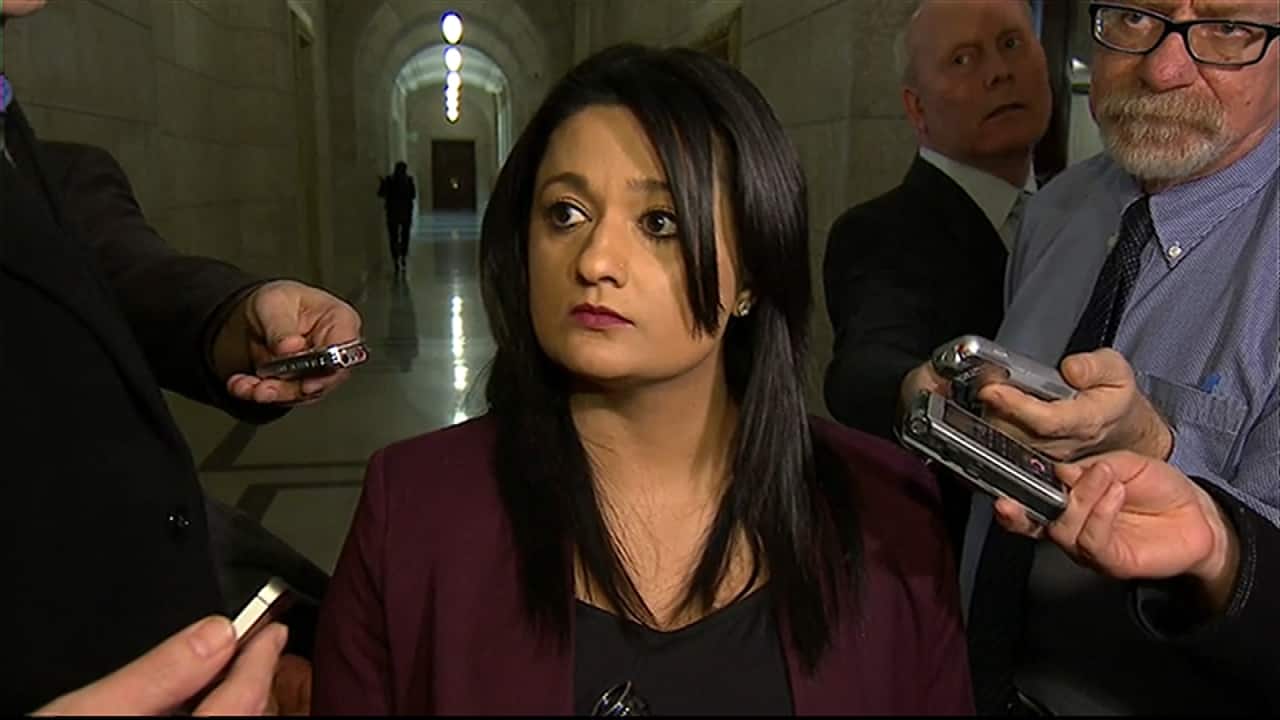 5 years ago
1:02
Jamie Hall has stepped down as the Manitoba Liberal candidate in Southdale, following controversy surrounding social media comments that are offensive to women. Liberal Leader Rana Bokhari issued a statement on Thursday morning, saying Hall has apologized to her and offered his resignation. 1:02

Manitoba Liberal Leader Rana Bokhari says her party has cut ties with Jamie Hall, who has stepped down as the party's candidate in Southdale amid controversy surrounding social media comments that are derogatory to women.

Bokhari announced on Thursday that Hall has apologized to her and offered his resignation.

"He apologized as much as he could. I accept the apology, I accept the resignation," she told reporters after question period.

"I have no desire to engage in any of those conversations anymore with that individual."

Bokhari said she does not know how the party's vetting committee missed Hall's tweets, calling the oversight a "massive misstep."

"The comments were disgusting. That's not who we are as a party, that's not who I am as a person, as a woman," she said.

"You can imagine that I feel sick to my stomach right now, even just standing here. I have to take responsibility for this. I don't know what else to say."

Manitobans will go to the polls on April 19.

The provincial New Democrats raised concerns about some of Hall's Twitter posts on Wednesday, a day after he was nominated as the Liberal candidate in the Winnipeg constituency.

For example, one of Hall's tweets from 2012 asks, "If a whore screams in the bedroom and no one is around to hear it, is she really a whore?"

Another tweet from 2011 says, "Killin' them with kindness doesn't work if they're born bitches."

In a YouTube video promoting the book, the main character describes "seven types of women that I have found to have taken control of my story," including "the slut," the "good girl," "the virgin" and "the crazy bitch." In the novel, he compares explicit sex acts by women to driving a race car.

Hall also maintained a blog about dating. And as a bar promoter, he has filmed videos promoting "sexy ass" female bartenders.

Hall has said some of the tweets were part of a promotional campaign for his book, while others were meant to be satire.

He offered his own explanation for the tweets and videos in a long post, titled The Politics of Language, that he published on his blog on Thursday.

"People want their politicians to be perfect. People talk like me, but they're not running for office, so I get the scrutiny. However, I was running because I have something to contribute to government. I truly believe that, and so too, did a lot of people," he wrote.

Hall apologized for his remarks on Wednesday, but added that freedom of expression is one of the greatest benefits of living in Canada.

"That's the thing I love about living in Canada is that you can release books that are both creative and pieces of fiction and that you're allowed to have freedom of expression," he said.

While the NDP targeted Hall and the Liberals, the New Democrats also came under fire for comments that Wab Kinew, its star candidate in Fort Rouge, made about women during his time as a hip-hop artist.

Kinew's lyrics have referred to women as "bitches" and "whores."

Kinew said he acknowledged and apologized for his mistakes in his 2015 book, The Reason You Walk.

"I think I've been very up front about the fact that I've changed the way I view things and recognize there's no place for misogyny … especially given the issue of missing and murdered women and gender-based violence," he said.

"We have to as men step up and let people know that words can be harmful, and the role we have to play in ending gender-based violence and discrimination is to tell other men that it's not OK and that we have to make the public a safe space for everyone."

Manitoba political analyst Chris Adams said the difference between Hall and Kinew is that Kinew apologized for his remarks before joining the election campaign, while Hall did not.

Adams added that the Liberals may be dealing with a lack of resources, but he believes more has to be done to ensure prospective candidates are vetted well in advance.

"Just a simple Google [search]. We all know how to do that … putting the candidate's name in as well as to see what sort of tweets and other things are posted up," he said. "I think a teenager could even do that type of work."

At the same time, Adams said he does not think the situation is a massive blunder for the Liberals.

"I think they've addressed the situation, I think they can recover," he said.

"I think that the downside for the Liberals is they really have seen the NDP getting pulled off message every week for the past couple of months, and now it's the turn of the Liberals being taken off their message."