Ivana Yellowback still remembers the urgent message she received years ago from her mother, asking where she was and what she was doing. "So I called her. And she said, 'I had a dream you went missing.'"

Violence against Indigenous people 'has been happening for hundreds of years'

Ivana Yellowback still remembers the urgent message she received years ago from her mother, asking where she was and what she was doing.

For Yellowback's family, the fear is real. Two of her female cousins have been victims of homicide and a third, Sunshine Wood, has been missing since 2004.

"It weighed heavy on my heart that my mom fears this stuff, because this happened to her nieces," Yellowback told CBC News Friday.

Yellowback, 27, comes from Manto Sipi Cree Nation in northeastern Manitoba. Now a sociology student and community service worker in Winnipeg, she's been following the National Inquiry into Murdered and Missing Indigenous Women and Girls since it began 2½ years ago.

The inquiry's final report was obtained by CBC News on Friday, three days before its official release. It described the disappearance and murders of Indigenous women as the product of a "Canadian genocide" — a term Yellowback would broaden to encompass all of North America.

"It's like a colonial genocide that is ongoing and this is something that has been happening for hundreds of years," she said.

Although she hadn't yet read the full report on Friday, Yellowback said she expects it to confirm what people like her mother have known for decades — the threat of violence that hangs over Indigenous people on this continent.

"It's crazy that it took $92 million and this commission's report for those same statements and those words to be verifiable, when our families and our mothers and our kookums were telling us, as young women growing up, to be careful." 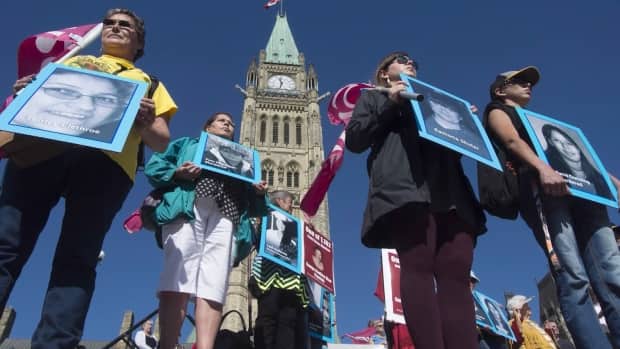 2 years agoVideo
3:53
National inquiry has concluded in its final report that decades of violence experienced by Indigenous women and girls in Canada amounts to genocide 3:53

When the 1,200-page report and its 230 recommendations are officially released on Monday, Yellowback hopes it will promote more awareness, especially in the educational system, where she would like to see all children learn about the issues.

"There is a misogyny going on," she said. "It's a misogyny specifically tailored toward Indigenous women and girls."

For immediate emotional assistance, call 1-844-413-6649. This is a national, toll-free 24/7 crisis call line providing support for anyone who requires emotional assistance related to missing and murdered Indigenous women and girls. You can also access long-term health support services such as mental health counselling and community-based cultural services through Indigenous Services Canada.