International students in Manitoba who become seriously ill may be forced to return to their countries of origin or risk losing coverage under their new private health insurance plan.

International students in Manitoba who become seriously or terminally ill may be forced to return to their countries of origin or risk losing coverage under their new private health insurance plan.

"The return to the country of origin is indeed the universal practice for all types of international student plans across Canada," Golovko said.

International students contribute to the economy of this province. There's no reason that they shouldn't be extended the same rights or the same health care.- Dele Ojewole, Canadian Federation of Students

The Progressive Conservative government first announced in March that international post-secondary students would lose Manitoba Health coverage as of Sept. 1, 2018.

The government estimates the move will save taxpayers $3.1 million, but it means the students have to pay for their own private health coverage.

Both the University of Manitoba and the University of Winnipeg elected to cover the cost of the private insurance plan for the 2018-2019 school year. However, students must pay their own premiums starting next September.

Dele Ojewole, a former international student from Nigeria and now chair of the Canadian Federation of Students for Manitoba, called the new rules "inhumane."

Compelling a student who is either dying or so unwell they cannot attend class to travel to their home country is "very harsh," the 25-year-old said.

When international students were covered under the public health insurance plan, they were eligible for the same medical services as Canadian citizens at no cost, as long as they had a valid study permit from the federal government.

Typically, study permits are issued for the length of the education program plus 90 days.

Under the new private plan the University of Manitoba and the University of Winnipeg negotiated with Manitoba Blue Cross, if students become terminally ill or if they are no longer able to continue their studies due to a medical condition, the insurer will assist the student to return to their country of origin.

If the patient refuses to return, Blue Cross can cancel their medical coverage in Manitoba.

A lengthy hospital stay in Canada can be costly. A man traveling from India recently incurred a $300,000 bill from St. Boniface Hospital in Winnipeg.

Some limits on coverage, says university

The Manitoba Blue Cross plan costs roughly $600 per year for each undergraduate and graduate student and covers virtually all the same services that Manitoba Health covers — including routine checkups with a doctor, hospitalization, surgeries, home dialysis, medical emergencies in other parts of Canada and prosthetic devices.

The coverage plan also pays for transportation to bring up to two immediate family members to the bedside of a student who has been hospitalized for at least a week.

"As with any insurance plan there would be limits on some of the coverage," said Colin Russell, registrar for the University of Winnipeg.

"Certainly if [a student is] in intensive care and they're not able to be moved, the insurance would be covering the cost, but if somebody is that sick then … they're not going to be able to remain as a student, likely, so probably we're going to try and make every effort to help them to get home to continue their care."

Once the student returns home, their coverage would cease.

Red River College is covering the cost for all returning international students this year but new students are required to pay their own premiums. The plan will cost new students $730 per year for coverage.

Brandon University and Assiniboine Community College have signed with the insurance provider Guard.me at a cost of $712 for each student per year, and require both returning and new international students to pay their premiums this year.

The policy for Brandon University students includes some limits on coverage, such as maximum lifetime payouts of $50,000 for psychiatric care and $25,000 for maternity complications.

Eligible surgeries, hospital stays and lab testing appear to be covered with no limit, based on publicly available Guard.me handout.

The U of W's Russell said the intent of the plan with Manitoba Blue Cross is to mirror the Manitoba Health plan as closely as possible.

On top of base medical coverage, international students must pay additional amounts for extended eye, drug and dental coverage.

Public health coverage was extended to international students by the previous NDP government in 2012.

Kelvin Goertzen, the current minister of education, told CBC in a written statement the NDP policy was intended to attract students to study in the province.

But Manitoba, he said, has a low cost of living and some of the lowest tuition rates outside of Atlantic Canada, and does not need any additional incentives.

"We do not have evidence to demonstrate that health coverage is a determining factor in their decision to study here," he wrote.

"We understand educational institutions are working with benefits providers to develop plans for students and it is up to each school to decide the best way to cover costs during the transition." 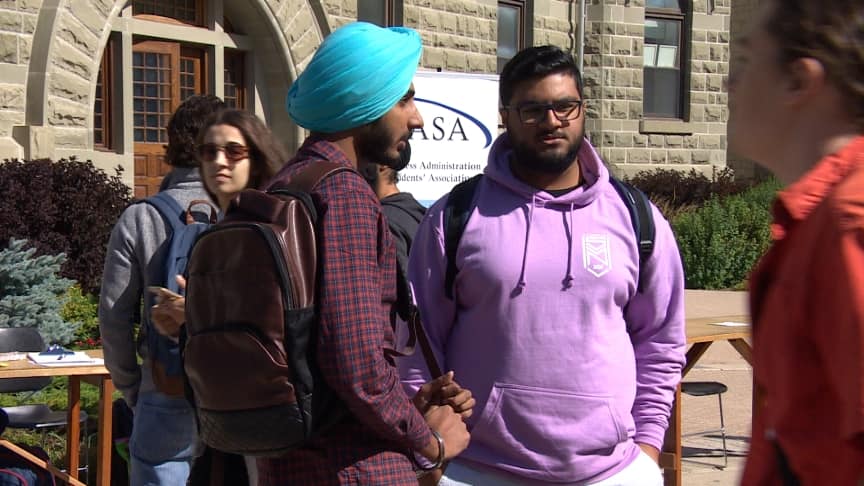 International students in Manitoba have an extra cost this year, health insurance

3 years ago
2:03
International students in Manitoba who become seriously or terminally ill may be forced to return to their countries of origin or risk losing coverage under their new private health insurance plan. 2:03
CBC's Journalistic Standards and Practices|About CBC News