Some international students enrolled in Assiniboine Community College's hospitality program say they had to sacrifice class time this winter to serve at events, including fundraisers for the school.

'We paid for study but in reality we worked for free,' says student who paid $16K in tuition, fees

Some international students enrolled in Assiniboine Community College's hospitality program say they had to sacrifice class time this winter to serve at events, including fundraisers for the school.

Changnam Lee paid more than $16,100, double what Canadian students pay in tuition and fees, for the first year of a two-year hotel and restaurant management diploma program at the college in Brandon, Man., 200 kilometres west of Winnipeg.

The 39-year-old, who would like to become a hotel manager, previously worked as a journalist in Seoul and Daegu, South Korea, before coming to Manitoba last year with his wife and three children.

Lee contacted CBC, saying he wanted to talk about what he calls the "poor education service" at Assiniboine Community College so other international students know about his experience.

"At this moment, we are not in a good place anymore," said Lee.

Two other international students in Lee's program declined to be interviewed but did say they had concerns about the lack of class time and the number of independent assignments students are required to complete. One said they would not recommend the school to others who want to study hotel and restaurant management.

Each require culinary students at the school to prepare food and the hotel and restaurant management students, including Lee, to serve guests.

Taken together, the events provide "an exceptional learning experience for the students," said Deanna Rexe, vice-president in charge of programs at Assiniboine Community College.

"In hotel and restaurant management, we have events and real-life experiences. That is their laboratory," she said.

A spokesperson for the school, Danielle Adriaansen, said Assiniboine Community College either loses money or breaks even at Grey Owl and the International Wine and Food Festival, while the remaining three events turn a profit for the college. Last year the events raised a total of $16,815 for the school and $23,000 for the school's foundation, Adriaansen said.

The college brought in $3 million in revenue from international students' tuition and fees and English-as-an-additional-language training.

The events draw hundreds of people to the college's Manitoba Institute of Culinary Arts, a restored heritage building on the North Hill Campus. With stately white pillars, oak-panelled rooms and brick chimneys, the institute provides Brandonites a unique venue in the mid-size Prairie city to enjoy a good meal, wine and cocktails.

Lee said at first, the opportunity looked good on paper to him.

"But in detail, I have felt that something needs to be changed," he said. "We paid for study but in reality we worked for free."

At Grey Owl, which this year ran from Jan. 18 to Feb. 16, guests are presented with dishes that look ripped from the pages of a Canadian travel magazine.

Lee and his fellow hospitality classmates were split into two groups to run the event. Each student was scheduled for two weeks of full-time, unpaid work experience.

Grey Owl made Lee a better server, but he was not able to learn everything he thought he would, he said. For example, Lee said an instructor told him a six-credit hospitality software course would be covered during the event.

"We had expectation to learn from that course, we paid tuition fee for that course," he said. "The instructor told me everything was put into the event."

After Grey Owl was over, Lee and his classmates had two weeks off, without classes, to allow the second group to work at the event.

This was on top of other time off, including March break.

Assiniboine Community College's slogan is "learn by doing" and many of its programs include mandatory lab time that mimics job environments.

Rexe said she was surprised to learn students have doubts about the value of their academic program.

"We talked to the faculty and the program officials and no one has had a complaint come forward, so it may be that this part of the stress of the end of the year," she said.

Students get courses totalling 920 credit hours in their first year, Rexe said. Of that, roughly 30 hours are spent at events, leaving students with 890 hours of class time, school spokesperson Danielle Adriaansen said. On top of the 920 credit hours, students get an additional 143 hours of event preparation and serving work experience, said Adriaansen.

Students had far less than 890 hours in class, he said, although he did not keep track of every hour. He said in at least three courses, there wasn't enough class time to cover all the required material to pass exams and complete assignments: human resources, hospitality software and tourism.

"Students just stay at home and study by his or herself," he said.

Rexe said Assiniboine Community College does not require students to teach themselves. It is possible students are confused about the nature of the the group work and projects, she said.

Assiniboine Community College Students Association president Anneliesea Parkinson, who is an international student, said her organization has not received complaints about a lack of class time, but she encouraged any students with concerns to speak with the union.

"We do not shy away from aiding our students and each case is handled in a confidential manner," she said.

Unlike British Columbia and Ontario, Manitoba does not do external quality checks of colleges. A recent report by the province does recommend the government begin quality reviews of schools every five years.

Lee's trust in Assiniboine Community College was broken when the school didn't give the tips to students after Grey Owl, he said.

Lee said he was told the money was withheld to pay for missing linens. The day after a CBC reporter contacted the school about the tips, students received an email from the college notifying them they were distributing the money within days.

A spokesperson for the school said cheques are normally issued to students in the spring.

"I'm just feeling very displeased that international students [are] considered as a cash cow," said Lee, who works two jobs, one at a grocery store and the other serving at a hotel, to make ends meet.

"We are in a very healthy position financially and have no need for that," she said.

Tim Feduniw, executive director for the Manitoba Restaurant and Food Services Association, said there is always a demand for employees in the sector. A college degree in the restaurant industry is not critical but "can be very very valuable," he said.

Among the careers Assiniboine Community College lists that could come out of taking the hotel and management program are food and beverage serving, housekeeping, front office work and human resources.

The average starting salary for graduates of the hotel and restaurant management program is $31,310, the school says. 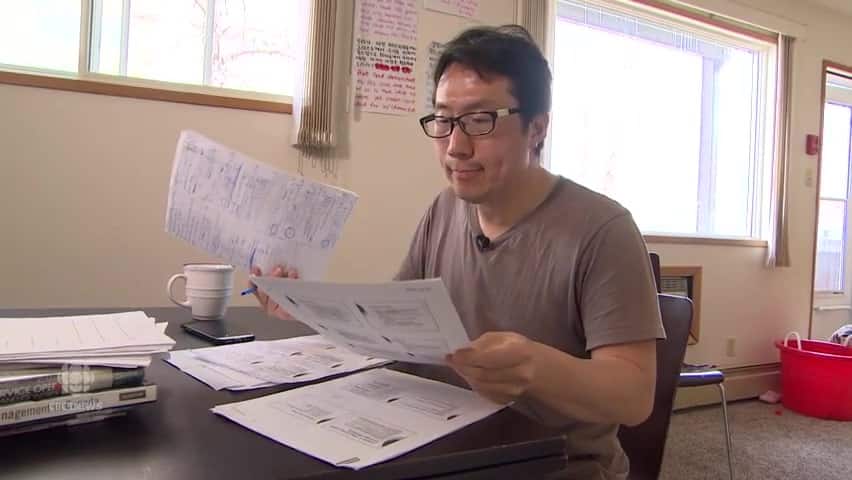 3 years ago
2:17
After paying thousands of dollars in tuition, some international students enrolled in Assiniboine Community College's hospitality program are raising concerns they lost valuable class time this winter to serve at events, including fundraisers for the school. 2:17