Some internationally educated nurses in Winnipeg say the English language requirement to become a registered nurse in Manitoba, should change for the better, to reduce bureaucracy and the lengthy time it takes to get licensed.

Some internationally educated nurses in Winnipeg say the English language requirement to become a registered nurse in Manitoba needs to be changed, to reduce bureaucracy and the lengthy time it takes to get licensed.

Bhupinder Grewal moved to Canada in 2012. Prior to that, she worked as an intensive care nurse in India for four years.

She started her nursing application in Manitoba in 2015 and after nearly five years, she's still waiting to get licensed.

Grewal's process is now stalled because she needs to retake one of two English tests — the CELBAN or the IELTS — to fulfil her language requirements, which isn't possible because they've been cancelled due to COVID-19. Both tests won't be offered again until next year.

This isn't the first time Grewal has had to take the CELBAN. She took it before 2015 and passed, but the results expire every two years.

"It's very stressful, you pass once, then you have to do it again. So it doesn't make any sense," said Grewal.

Grewal retook the CELBAN test in 2019, but this time, she failed. Because of the pandemic, she hasn't been able to register for the test again.

Without submitting an updated language test result, Grewal can't complete her registration and practise in Manitoba.

Last week, Health Minister Cameron Friesen said a special designation will be granted to 39 internationally educated nurses waiting on English tests so they can practise in Manitoba and have the language requirement temporarily waived. Grewal is one of them.

The College of Registered Nurses Manitoba did not provide a timeline on when the designation will be available, but said it's a top priority and it's waiting on a ministerial order.

"Our work aims to provide objective, fair and timely processes to enable qualified IENs to obtain RN registration in Manitoba and we understand how important that is in relation to the challenges created by the COVID-19 pandemic," the college said in an email statement.

"We will continue to work with our partners in government, in regulation and in the health system to help support the pandemic response in Manitoba within the context of our regulatory mandate," it said.

Grewal said she believes the two-year expiration date should be waived for the English test results.

Nicholas Rouben, a registered nurse working at the Health Sciences Centre, feels the same. Prior to coming to Canada in 2015, Rouben obtained bachelor's and master's degrees in nursing in India. He worked in a tertiary care hospital and taught at a nursing college.

Rouben said it took him four years to get certified in Manitoba. He waited two years to take a bridging program at Red River College. In addition, he had to travel to Toronto to take the CELBAN because the test wasn't offered for another four months.

"I had to go to Toronto to write the exam because I could not get the date here," he said.

The tests are also costly: $395 for the CELBAN and approximately $329 for the IELTS.

Rouben said having to do it twice is a hassle. He and Grewal said if the expiry date can't be waived, then the test results should be required at the end of the application process, not at the start.

"Instead of writing the exam twice, they can take the exam at the end so that we have to write the exam only once," Rouben said.

The CRNM said the period of test validity is set by testing providers. It said two years is a common standard.

The Touchstone Institute, responsible for administering the CELBAN, said test score users, such as the college, require documents to be current and valid. It says the two-year expiry date is "an aspect of regulatory policy."

"Test expiry dates are based on the assumption that the measure of examinees' capabilities at a given point in time may become less trustworthy indicators of those capabilities as time passes," a statement from the institute said.

CBC News reached out to IELTS Canada for comment, but did not receive a response.

The Manitoba Nurses Union said the nursing vacancy rate in Winnipeg Regional Health Authority and Shared Health combined is around 16 per cent.

Darlene Jackson, the union's president, said it's a shame the IENs are unable to work because of a language test.

Jackson said the province needs to speed up the process to assign the special designation. She also believes the college needs to reevaluate its registration process for internationally educated nurses.

"We have nurses who have English proficiency, have jumped through all the hoops for the bridging program and now cannot register to work in our province," Jackson said.

"If we're going to look to recruit nurses to this province, we have to make it accessible. We have to make registration seamless for them because they will go to other provinces."

The college requires internationally educated nurses to open an application through the National Nursing Assessment Service, which requires a CELBAN or IELTS test score.

The service said it's aware that COVID-19 is causing delays for some applicants, so it changed its requirements for submitting the language tests. Prior to the pandemic, applicants had to submit results no older than six months at the time of application. Now it's 18 months.

If applicants have a minimum two years of post-secondary nursing education and 1,450 qualified clinical hours, they're asked to undergo a clinical competence assessment by the college.

The assessment determines if an applicant can write their NCLEX-RN licensing exam, are required to take bridging courses to supplement gaps in knowledge or must complete basic nursing education and enter into a four-year degree program.

Grewal passed her clinical assessment and was asked to take bridging courses, which she finished. She's now waiting to fulfil her language requirement before writing her licensing exam.

She said she has another four months before she needs to restart her application with CRNM and if she's not able to do that, she's considering moving to Toronto.

"Now I'm staying home with that much stress … my husband is supporting me, but it's so hard for him right now because I study a lot and I can't do anything," said Grewal, who's currently not working.

When contacted by CBC, Health Minister Cameron Friesen's office declined to comment, but said it will provide an update on the special designation later this week.

The issue was first raised by NDP MLA Malaya Marcelino last week and Grewal said she's grateful the issue was brought forth to the government.

"I am hopeful now but before I was hopeless," said Grewal.

"The CRNM, public health minister should know that we have a lot of nurses. We studied for years," she said. 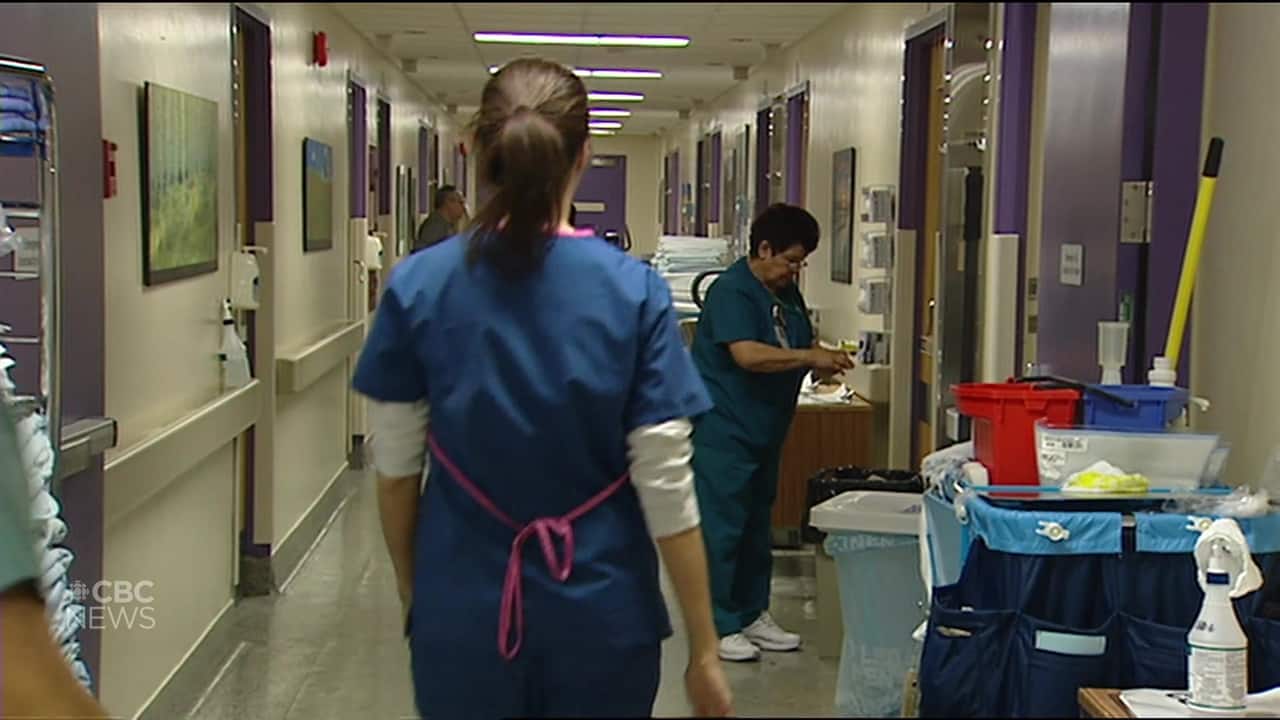 2 months agoVideo
2:10
Some internationally educated nurses in Winnipeg say the English language requirement to become a registered nurse in Manitoba needs to be changed, to reduce bureaucracy and the lengthy time it takes to get licensed. 2:10