Kevin Kwasny has filed a $7.5 million lawsuit against Bishop’s University 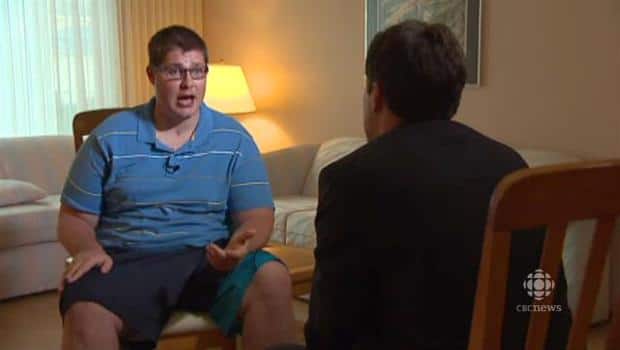 7 years ago
1:56
Kevin Kwasny, whose life was changed forever after suffering irreversible brain damage in a university football game, talks to CBC News about lost dreams. 1:56

"I lost my girlfriend. I lost my eyesight. I've lost use of the right side of my body.  And I've lost my fact that I could have been in the CFL today had this not have happened to me," Kwasny, 24, told CBC's Cameron MacIntosh.

Even the ability to perform basic tasks, such as tying his shoes and cutting food, has been stolen. He receives round-the-clock care at a facility in Selkirk, just north of Winnipeg.

The Winnipeg-born and raised man was playing for Quebec's Bishops University on Sept. 10, 2011, when he took a blow to his head during the game.

In a $7.5-million lawsuit he has since filed against Bishop’s University, Kwasny claims he was forced to go back into the game, despite having symptoms of a concussion.

He alleges he immediately told multiple members of the coaching staff about his injury but he was still ordered to play.

"I went back into the game after that I don't remember."

Shortly after returning to the field, he was hit again and suffered a major brain bleed. He began vomiting and went unconscious.

At half-time he was rushed to hospital in critical condition, where he had emergency surgery.

Kwasny's claims have not been proven in court.

Bishop's University denies the allegations. Principal Michael Goldbloom said it's a tragedy for Kwasny and his family and a devastating incident for the entire football program.

"I can assure you, our football program, our coaches, our medical staff would not allow an athlete to go back on the field if there was any indication of head trauma," he said.

Goldbloom said a review was done at the time, and there was no indication that Kwasny had suffered any type of injury. He said the university will defend itself in court.