As many as 26 sushi restaurants in Winnipeg may have used an unlicensed immigration consultant to hire Korean workers - some were coerced into slicing off part of their paycheques to give to their employers, according to court documents obtained by the CBC’s I-Team.

As many as 26 sushi restaurants in Winnipeg may have used an unlicensed immigration consultant to hire Korean workers and some were coerced into slicing off part of their paycheques to give to their employers, according to court documents obtained by the CBC's I-Team.

Hae Suk Yoon, 67, is facing multiple charges under the Immigration and Refugee Protection Act and one Criminal Code offence for possessing proceeds of crime.

Yoon is alleged to have illegally supplied immigrant workers to local sushi restaurants, and at least one of those restaurants allegedly coerced workers into handing over hundreds of dollars per paycheque to their employers, according to the documents.

The evidence comes from an investigation by the Canada Border Services Agency into the actions of Yoon, a Korean-born Canadian, charged in September with acting as an unauthorized immigration consultant between 2009 and 2014. 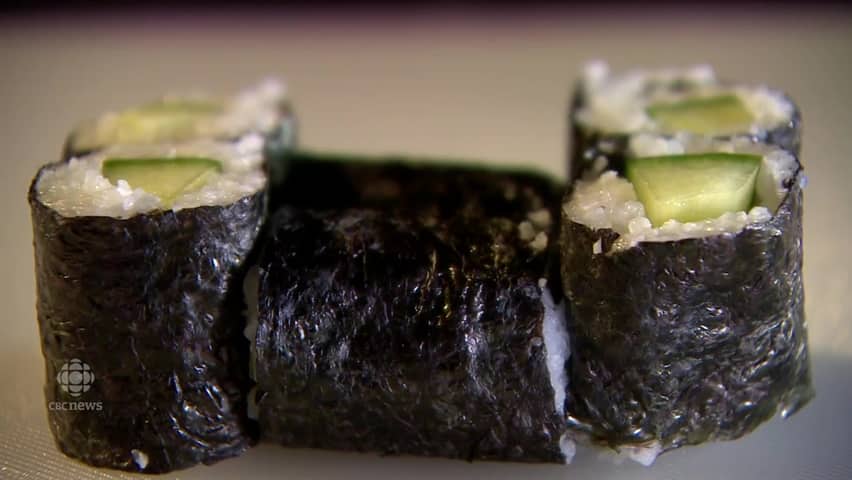 3 years ago
1:55
As many as 26 sushi restaurants in Winnipeg may have used an unlicensed immigration consultant to hire Korean workers and some were coerced into slicing off part of their paycheques to give to their employers, according to court documents obtained by the CBC's I-Team. 1:55

The 96-page information to obtain a search warrant for Yoon's residence includes at least one case where a confidential informant told a CBSA investigator they were forced to give a portion of their paycheque back to a Winnipeg sushi restaurant. The "payback" was seen as a workaround for the restaurants to avoid paying the full amount it agreed to pay the worker in its application to hire a temporary foreign worker, the source alleges.

None of these allegations has been proven in court.

'I admit most of the charges'

The investigation into Yoon first began in 2009 after a CBSA superintendent interviewed Yoon — who is not an authorized immigration consultant — as he assisted three Korean foreign nationals at the border crossing in Emerson.

I was in the position to help a lot of newcomers.- Hae Suk Yoon

What followed was a years-long investigation that involved collecting information from various confidential sources, interviews with several restaurant owners and hours spent mining CBSA data before Yoon was charged in September of 2016.

When reached by the I-Team, Yoon admitted he had never become an accredited immigration consultant, saying what began as volunteer work for the Korean community snowballed into a full-time job.

"I admit most of the charges, because I did it," Yoon told CBC last week, adding he has been in Canada since 1976. "It happens to be I was in the position to help a lot of newcomers."

He said he witnessed times where an employer would skim money off a worker's paycheque, but said he'd always pull them out of that place and get them a new job.

"My focus was getting them to work legally," he said.

"They (some restaurants) want a kickback, there are a lot of places that are honest, too," Yoon said. He refused to name the restaurants he saw clawback wages.

"I don't know how they do it, but my only part is getting the worker the permit. Between employer and employee they have their own agreement."

A Korean foreign national known as Source B in the documents alleges they applied for a job at an unnamed Winnipeg sushi restaurant in 2012.

They allege that in order to secure the job, they would have to pay Yoon the cost for processing the document to obtain the permit — and that would come off their paycheque.

They also soon learned they would have to "pay back" the restaurant part of their paycheque, which, according to the source, worked out to "hundreds" in each pay period. The "payback" was equal to what the restaurant deemed a "fair" wage, Source B alleged.

"Source B did say that this 'payback' arrangement was also happening to a couple other workers in the restaurant who were foreign nationals from Korea," stated the search warrant document dated Nov. 3, 2014.

People are abusing the weaker people who want to have the dream.- Ji-Yung Choi

In 2017, the median wage for a chef in Manitoba is roughly $15/hr, according to Employment and Social Development Canada.

The document also includes allegations from a second confidential source, who states that Yoon was providing over a dozen local sushi restaurants restaurants with foreign workers.

Source A claims the employers are taking money from the employee's paycheque to pay for Yoon to complete the paperwork needed for their work permit.

Under the province's Worker Recruitment and Protection Act, a recruiter is not allowed to charge or collect a fee from a foreign worker for finding or attempting to find employment for him or her.

All fees for getting the work permit are to be paid for by the employer.

'In a vulnerable situation'

Yoon said he had to charge employees about $1,500 for their work permit papers because he knew the business owners held all the power and wouldn't cough up the cash.

"Because employers is not going to pay, they are more in control of the situation. Because they know the worker they want to immigrate to Canada, so they know they are in a vulnerable situation," he said.

Evan Roitenberg, the lawyer representing Yoon, declined to comment about the case and said Yoon has not yet entered a plea.

Yoon is expected to enter a plea and be sentenced on Nov. 28 of this year, according to federal prosecutors.

Company record searches found many of the sushi restaurants named have changed ownership during the course of the CBSA's investigation. For that reason CBC News has decided not to name the identified restaurants.

Ji-Yung Choi, a Korean-born licensed immigration consultant, says she sees temporary foreign workers — regardless of nationality — come to Manitoba and settle for being underpaid or having their wages clawed back by their employer. She says it is a combination of the worker being too afraid to complain and wanting to eventually get permanent residence status.

"It is terrible, people are abusing the weaker people who want to have the dream. They have a dream to come to Canada to have a better life," she said.

Ken Zaifman, a longtime Winnipeg immigration lawyer, wasn't surprised to hear about the complaints raised by Source B and said wage "clawbacks" are seen frequently.

"I've known employers who have actually gone with employees with the bank to cash their cheque to get the money back. They want to show they are paying the employee and then they want the money back so there is no record of it," Zaifman said.

"This is a fairly recurring problem," he said "The clients are often reluctant to complain, they don't have status in the country or are on the road to getting permanent status. They don't know what effect complaining will have on their ability to stay in Canada."

The CBSA found that of the 106 names that had use Yoon's home address for an immigration process, most came to Canada as visitors or as students taking English as a Second Language courses. Many obtained permanent residence status, some after they got jobs at 13 sushi restaurants named in the document. The other 13 restaurants are named throughout the 96-page document as having ties to Yoon.

Canada's Immigration and Refugee Protection Act as well as the Citizenship Act require that anyone who provides immigration or citizenship advice for a fee or other consideration, must be a licenced member of Immigration Consultants of Canada Regulatory Council or a lawyer in good standing.

The CBSA would not comment specifically on whether the restaurants or owners named in the search warrant document would face additional charges.

"There are potential legal ramifications for any business involved in illegal recruiting practices of foreign workers. Depending on the type of offence, businesses could face penalties or sanctions from both provincial and federal authorities," the CBSA said in a prepared statement.

"Depending on the circumstances of an offence, financial transactions that support criminal activity may be subject to proceeds of crime legislation found in the Criminal Code. The CBSA, along with other law enforcement agencies, does investigate these types of offences."