It's been a fixture in Osborne Village for 47 years, but this summer Desart will close its doors for the last time.

Desart will close up shop as of July 1 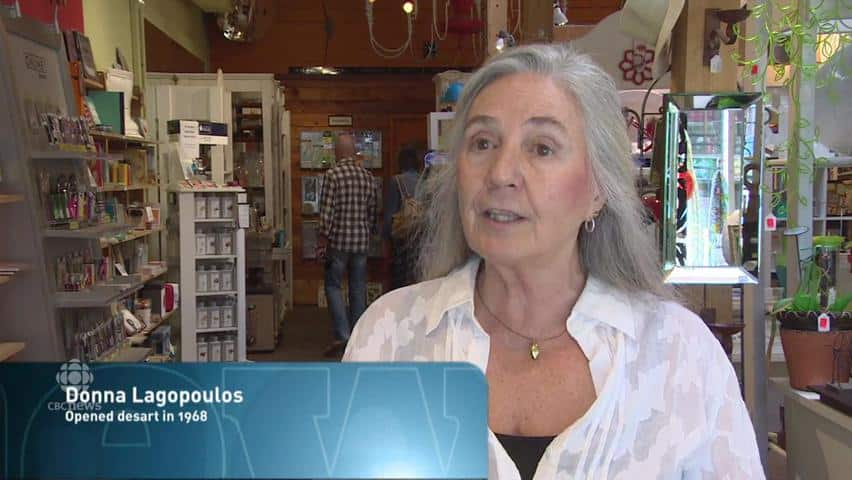 6 years agoVideo
1:42
It's been a fixture in Osborne Village for 47 years, but this summer Desart will close its doors for the last time. 1:42

It's been a fixture in Osborne Village for 47 years, and on July 1, Desart will close its doors for the last time.

The store's Facebook page says, "We aren't closing because we don't love you, because we totally do! It's just time for Donna to retire! She's been doing her thing since 1968! That's 47 years of awesomeness! And it wasn't an easy decision!"

Lagopoulos said she contemplated passing the store on, but decided against it.

"I've always said I love my store, and I do, and that when the time came that probably the best and most effective [thing] would be to close it…. Thanks for the memories," Lagopoulos said.

"I could go another five years, it's not going to make it any different," she added. "I think I'm ready to move on."

The unique cloud sign was sculpted for her by Winnipeg artist Andrew Beck in 1994.

"The space I'm currently in, which is right next door to the space I was in, was the old Basil's restaurant and that was the awning shape, like the frame for the awning of Basil's," Lagopoulos said.

"When I moved into that space we took down the awning form and Andrew did the sculpture on top of the form."

Lagopoulos isn't sure what will happen to the sculpture, which is also signed by Beck, once the store closes.

She wouldn't hint at what the plans are for the real estate, but she has high hopes and expectations for its future.

"Whoever and whatever takes this space will have to have passion, because passion is what generates business," she said.

Suzanne Burrows, a longtime loyal shopper at Desart, compares it with custom shops commonly found in other cosmopolitan centres.

The items found in the store are different and are "like holding a little piece of the world in your hand," she said.

"There is something for someone all the time. If you come in and it's not something that you were shopping for in particular you say, 'I could use that for Christmas or someone's birthday,'" Burrows said.

"She just has style."

Desart is asking longtime customers and staff from over the decades to share memories on its Facebook page and in person.