A massive cleanup effort is underway in Ochre Beach after a wave of lake ice swept up by strong winds destroyed and seriously damaged at least 20 homes in the community on Friday night. 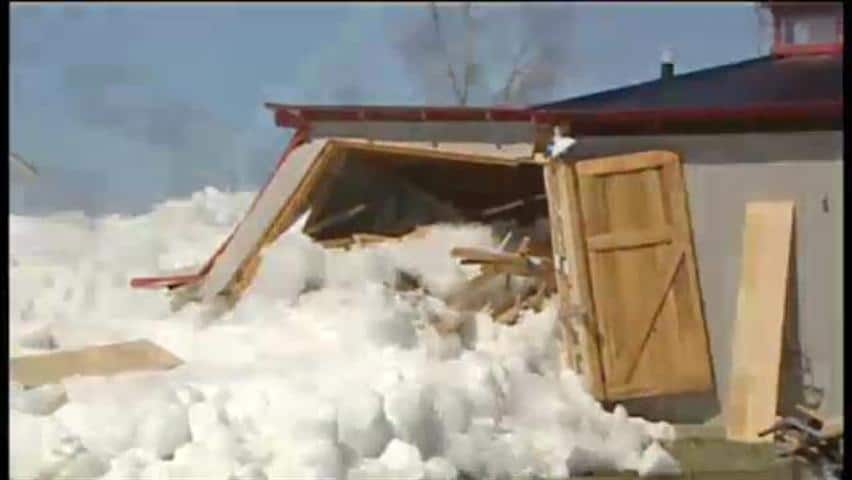 8 years ago
1:41
The CBC's Katie Nicholson speaks to home owners in the aftermath of ice wave destruction. 1:41

A massive cleanup effort is underway in Ochre Beach after a wave of lake ice swept up by strong winds destroyed or seriously damaged 27 homes in the community on Friday night.

Winds gusting at 80 km/h pushed ice off Dauphin Lake and caused it to pile up along the lake's southern shore where the community is located.

A local state of emergency was declared in the Rural Municipality of Ochre Beach after the piles of ice, which in some cases were more than nine metres high, destroyed 13 homes and cottages and severely damaged 14 others.

Several homes were completely crushed, others knocked right off their foundations.

Many devastated homeowners are still in disbelief about what happened.

Myles Haverluck was outside barbecuing when he noticed something was wrong. He said he could hear a big roar as he saw the wave of ice coming.

"By the time we went around the front the cabin, next door was moving 10 feet off its foundation," he told CBC News.

"Then we heard these cracks, and we went inside the house and the ice had come through the windows of the kitchen and living room" Haverluck continued.

Andrew Barnet was also working outside when the wind storm came towards the lakeshore homes.

"I looked across the deck and everything just kept coming," he continued. "It felt like it was hailing because the wind was throwing the ice everywhere. It was kind of nuts."

Barnet said he grabbed his keys and ran because he was worried the road would be blocked.

No one in the community was hurt.

Dennis Stykalo's, whose home was destroyed in the wind storm, told CBC News his insurance company does not cover any damage done by ice.

"You can't buy insurance coverage for ice," said Stykalo. "So what you have to do is hope the province through the disaster relief assistance, can come forward and provide some sort of assistance to cottage owners and also the homeowners," he said.

Rick Sorensen's family just moved into their home three weeks ago. Now, he worries if anything can be saved.

Stan Struthers, the MLA for Dauphin, was in Ochre Beach Saturday to show his support.

"It's a little early right now to say what kind of funding is available, but we right now need to sort through the kind of mess that's here with all the ice," said Struthers.

He said he will help connect people with federal and provincial officials so the damage can be assessed.

"My focus here... is to talk to my friends and my constituents, who are undergoing this stress again," said Struthers. "Hear their stories so I can advocate on their behalf."

The province will hold a meeting with the affected homeowners on Tuesday, said Struthers.

The destruction is even more devastating for some people in the area, as their homes were also ruined by flooding in 2011.

Ochre Beach is about 300 kilometres northwest of Winnipeg and 20 kilometres east of Dauphin.