Number of falls in personal care homes appears to plummet, but change in reporting may be reason

Winnipeg's health authority has changed the way it counts critical incidents in nursing homes, eliminating from its statistics most of the serious falls that result in injury, CBC News has learned.

Winnipeg's health authority has changed the way it counts critical incidents in nursing homes, eliminating from its statistics most of the serious falls that result in injury, CBC News has learned.

That means health officials often are not obliged to explain to patients or families what caused an incident, or what steps are being taken to ensure it doesn't happen again.

One patient-safety expert questions whether the gaps in reporting of such incidents are following the spirit of Manitoba's critical-incident legislation.

"The legislation says when something happens, with significant injury or death, it's a critical incident," said Dr. Rob Robson, principal advisor for Healthcare System Safety and Accountability Inc., a private company.

In the past, when a personal care home resident suffered a fall and was injured, a critical incident report was typically filed by the health authority with the province 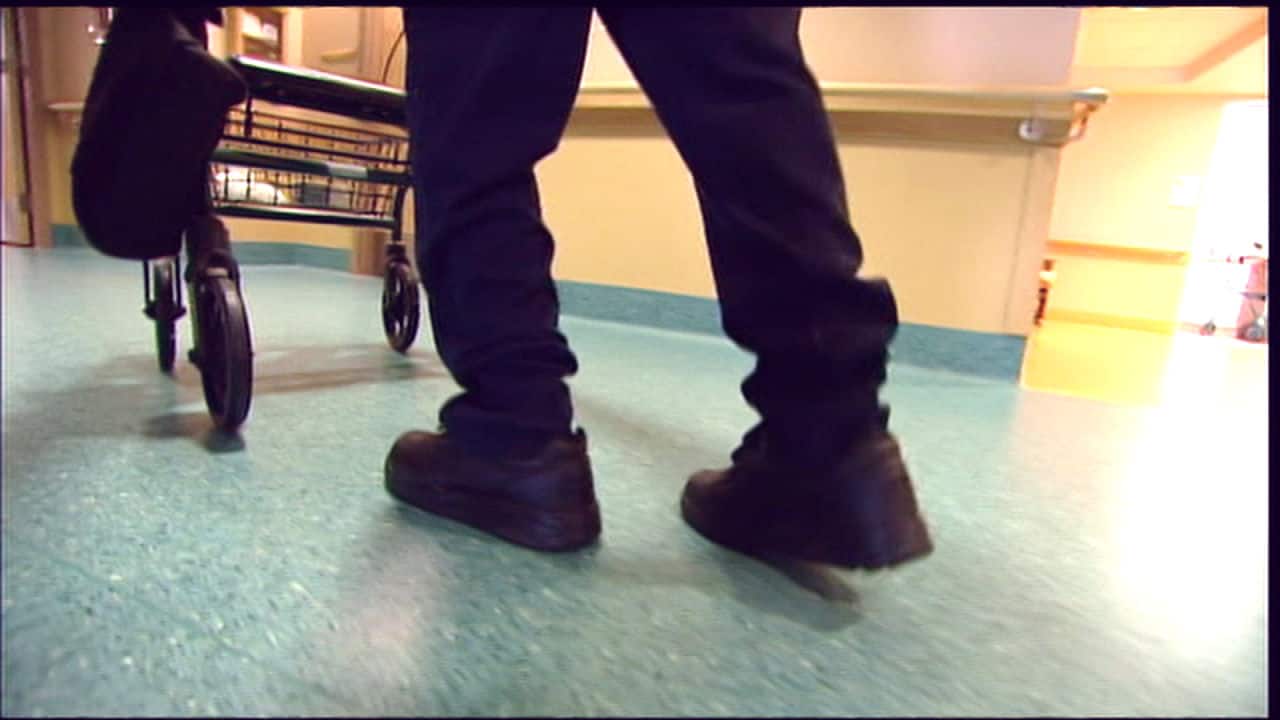 Number of falls in personal care homes appears to plummet, but change in reporting may be reason

3 years ago
3:28
Winnipeg's health authority has changed the way it counts critical incidents in nursing homes, eliminating from its statistics most of the serious falls that result in injury, CBC News has learned. 3:28

In 2013 there were 143 unwitnessed falls reported as critical incidents in care homes across Manitoba, with 82 per cent resulting in surgery. In 11 cases, the resident died.

But in 2016 there were just two unwitnessed falls reported as critical incidents.

Internally, however, the Winnipeg Regional Health Authority's data shows no drastic decline in falls in its personal care homes since 2015, with the number holding steady around 18,000 falls a year.

What did change is that four years ago, the health authority re-evaluated how it reports falls and whether they meet the criteria for the province's critical-incident reporting.

The WRHA says prior to 2014 it had over-reported the number of critical incidents due to falls.

"I think it's a little bit like an ostrich. You're sort of avoiding the issue," said Robson, who served as the WRHA's chief patient safety officer until 2009.

"The legislation in Manitoba is probably the best in the country. The definition of critical incident is clear."

In Manitoba, a critical incident is defined in the Regional Health Authorities Act as "an unintended event that occurs when health services are provided to an individual and results in a consequence to him or her that is serious and undesired." That can include death, injury and disability.

When a critical incident is reported to the province, it prompts an investigation, and the law requires health officials to inform the resident — or a family member or representative — what happened, what the consequences are, and what actions are being taken to address them.

He doesn't believe there is an intentional effort to hide information.

"There are all sorts of reasons why events don't get reported. I don't think you should be looking for malice on the part of anybody."

The WRHA defends its approach.

"The number of falls in personal care homes may not have changed. But what we do know is that the number that we have designated as critical incidents has changed and that's because we asked different questions," said Gina Trinidad, chief operating officer of long-term care for the health authority.

"People fall in personal care homes all the time, and so what we really wanted to hone in on is where there is serious harm and whether we could certainly make improvements in that regard to prevent serious harm."

Trinidad said the WRHA is now focusing more on falls that happen because of an equipment malfunction or staff issue as critical incidents.

Dr. Robson isn't sure he agrees with that change.

"Until you have looked into that to understand why that happened, it seems a bit strange to me that you would just arbitrarily remove that from your review."

NDP health critic Andrew Swan called for the health minister to review whether falls are being properly reported.

"If somebody is seriously injured in a fall, and there is some question as to whether there was the proper staffing or the proper resources, or even the proper way that a personal care home or hospital ward is organized, I think it is important that those be disclosed so an investigation can happen," Swan said, adding the goal should be preventing falls and serious injuries in the future.

The health minister has not said whether he'll ask for a review.

"It is my understanding that in 2014, it was determined that the WRHA was over-reporting falls as critical incidents and moved to adopt the Manitoba falls guideline for [critical incident] designation. I cannot speak to the government's decision-making process related to this policy as it was not made under our government," Goertzen said.

"When the NDP changed this, it was because the vast majority of those falls weren't reaching the level of what a critical incident is," said Goertzen. "So they were over-reporting in the system, and a great deal of resources were being used that would otherwise be used to look at critical incidents."

In general, critical incident reporting in all categories of serious incidents at personal care homes in Manitoba has drastically declined in recent years, with reports dropping from more than 244 in 2013, to 22 in 2016.

The WRHA has stepped up its strategies for preventing falls. At Deer Lodge Centre, Manitoba's largest rehabilitation and long-term care centre, a number of fall-prevention strategies are in place.

New clients and those at high risk of falling are monitored 24 hours a day. The centre has also come up with a decal system to signal each resident's fall risk to staff.

A number of fall and injury prevention tools have been brought in which have also helped reduce injury, according to Daryl Dyck, a clinical nurse specialist at Deer Lodge. 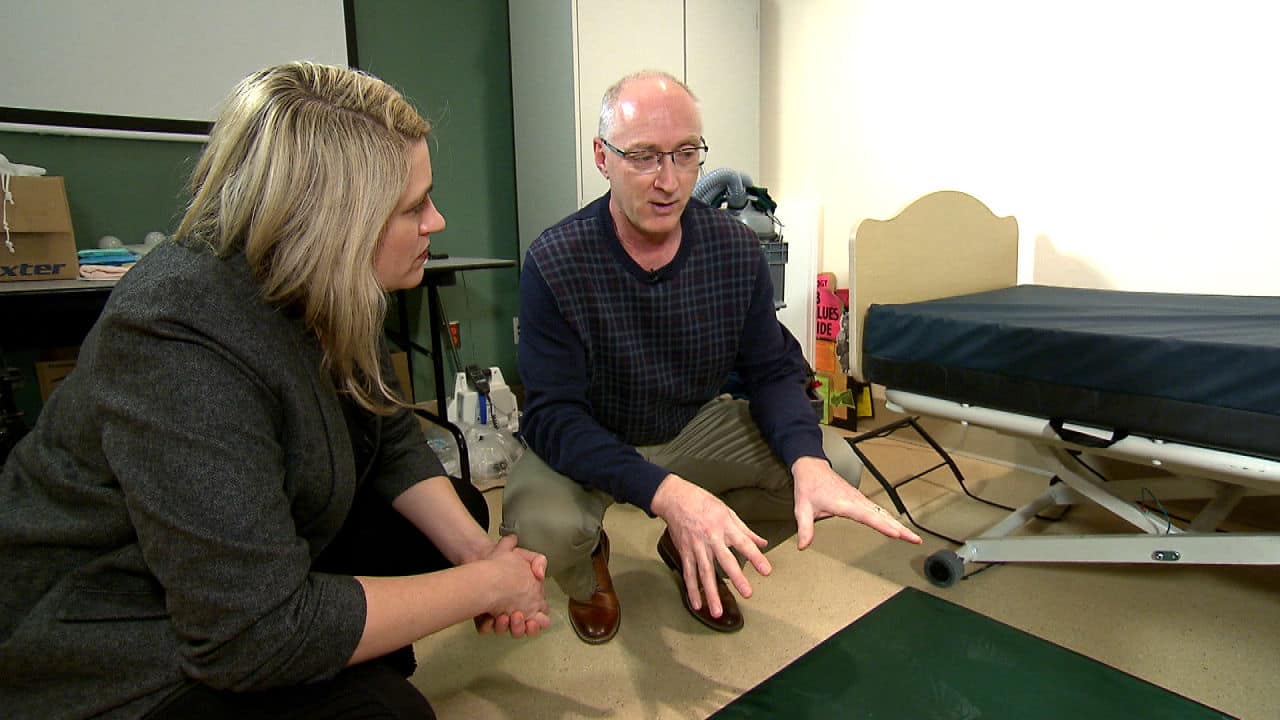 Tools to prevent injuries from falls

3 years ago
2:35
Falls in nursing homes are a fact of life. But just because residents are prone to fall doesn't mean they have to be injured. Deer Lodge Centre is tackling the problem head on. The I-Team's Katie Nicholson got a tour of some of their tools. 2:35

Over the last 10 years, the centre has brought in bed alarms that notify staff if someone has shifted dramatically in a bed or a chair, bought a number of specialized beds that can be lowered to just inches off the floor, and purchased fall mats and hip guards designed to cushion impact and reduce injury in falls.

"There is a small portion who will have injuries but we have reduced the overall fall rate with some of our monitoring," he said.