'It is heartbreaking': Violence at Winnipeg nursing homes causes 500 injuries to residents in 2 years

Residents are routinely abusing or assaulting other residents in Manitoba personal care homes, leading to two deaths in 2016 and more than 500 cases of injury in Winnipeg alone over the last two years, CBC News has learned.

Residents are routinely abusing or assaulting other residents in Manitoba personal care homes, leading to two deaths in 2016 and more than 500 cases of injury in Winnipeg alone over the last two years, CBC News has learned.

"It is heartbreaking to hear this is still going on," said Joanne Rislund, whose 87-year-old father, Frank Alexander, was a nursing home resident who died in 2011 after being pushed by another resident.

In one case in 2016, a resident aggressively removed another resident's feeding tube. The tube had to be surgically re-inserted and the patient died from complications two days later.

In the other case, one resident pushed another resident to the ground. The fall fractured the resident's hip and the victim died four days later.

The WRHA logged just under 7,000 reports of abuse or assault by residents in 38 Winnipeg personal care homes from October 2015 to December 2017. Of those, 504 resulted in injury to another resident.

Another 965 injuries to staff members were reported.

"My heart goes out to the family from 2016 that had to deal with, and are still dealing with, the loss of their loved one. Because that's not how you expect an elderly person to die," Rislund said.

Rislund thinks the extent of the problem is being underreported — a view backed up by patient safety expert Dr. Rob Robson.

The reported number is "astonishingly low," said Robson. He said the actual number of incidents was likely much higher. 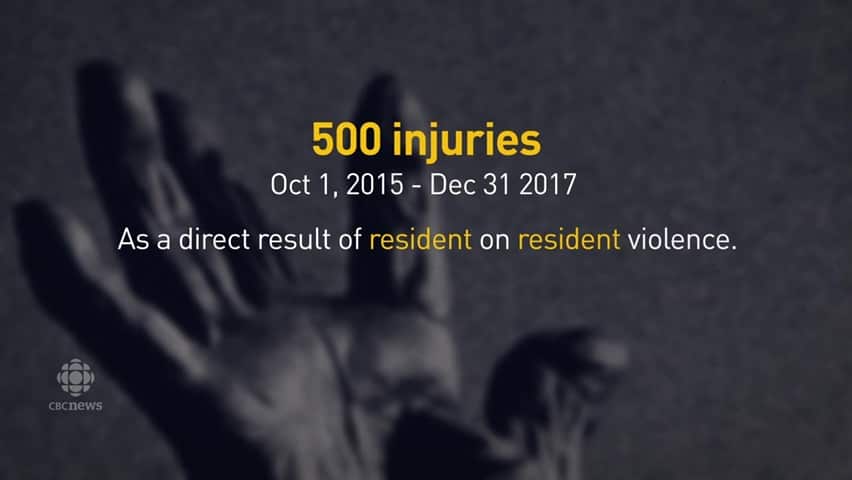 3 years ago
3:27
Residents are routinely abusing or assaulting other residents in Manitoba personal care homes, leading to two deaths in 2016 and more than 500 cases of injury in Winnipeg alone over the last two years, CBC News has learned. 3:27

"Generally speaking, it's a good thing that events are being recorded, even though they are often tragic and sad and regrettable events. But unless events are being reported, they really can never be analyzed and reviewed," Robson said in an interview from Dundas, Ont.

In Ontario, a CBC Marketplace investigation has found reports of resident-on-resident violence in nursing homes have doubled over a six-year period, in part because of increased rates of dementia among residents.

The Winnipeg Regional Health Authority says about 60 per cent of its personal care home residents have some form of dementia, and that number is likely to go up.

There are 5,700 residents in Winnipeg homes.

"The baby boomers, the people born 1945 to 1963 — you can do the math — are getting into that period where they are going to be more likely to have dementia, and so there is going to be more people with the condition," said Dr. Barry Campbell, with the University of Manitoba's geriatric psychiatry program.

"There's anxiety, there's psychosis, there's depression, there's apathy — there's a whole range of behavioural symptoms that people have. Those events are not really increasing — it's the number of people that are increasing." 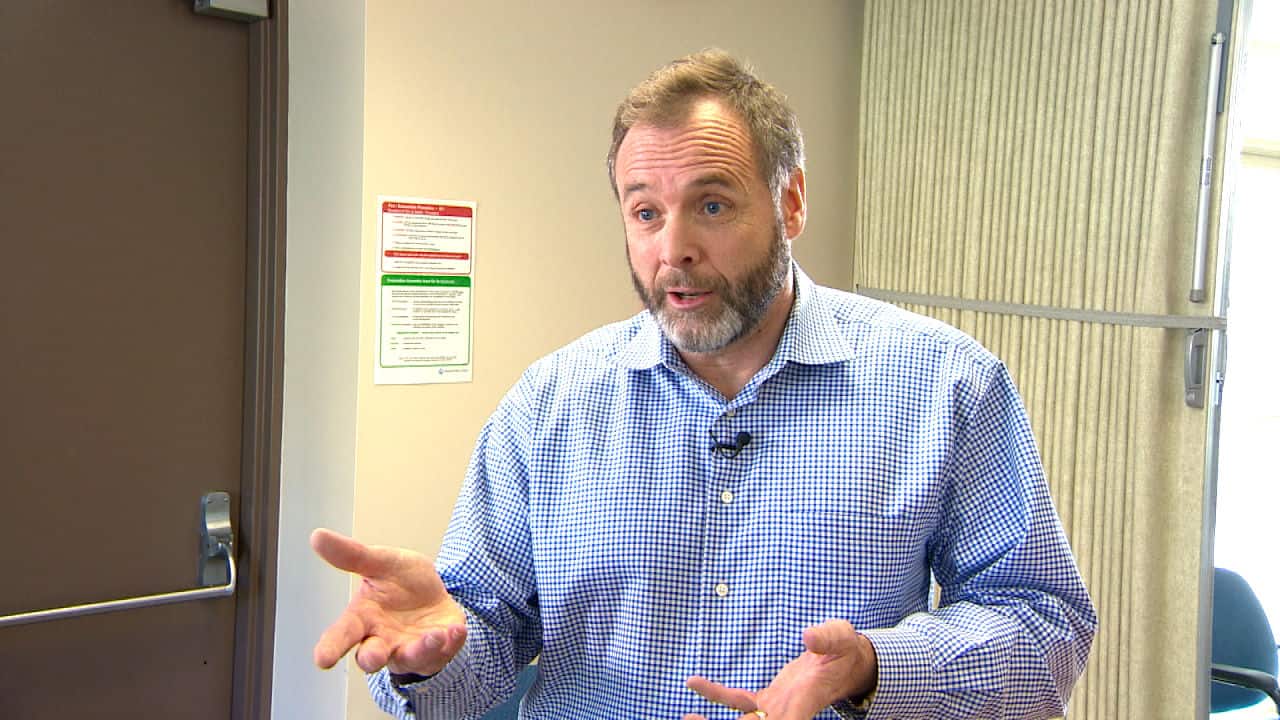 3 years ago
1:32
Dr. Barry Campbell explains how quickly a small event can escalate into violence among dementia patients. 1:32

Despite that, health officials say big changes have been made to address the issue of caring for people with dementia, in part because of an inquest into the high-profile case of Rislund's father.

Frank Alexander was living at Parkview Place care home in Winnipeg in 2011 when another resident, Joe McLeod — who suffered from severe dementia — pushed Alexander, causing him to fall backward and hit his head.

The inquest heard that both men had a history of Alzheimer's disease.

Manitoba Health says it has completed 22 of those action statements. Three are in progress, and one is still under review.

All personal care home residents are assessed for their potential for violence, and health-care staff are given specialized training to deal with violence prevention, a Manitoba Health spokesperson said.

To help deal with the sharp rise in dementia, the WRHA is expanding the number of beds in special needs behaviour units.

There are currently 79 of those beds in Winnipeg, located at Deer Lodge Centre, Actionmarguerite and Riverview Health Centre. Another 10 new beds slated to be added at Holy Family Home.

But WRHA officials say the need will continue to grow.

"[We don't know] what that number is specifically — we just know we'll need more in the coming years, especially as the baby boomers age and the requirements to provide a personal care-home setting for individuals in our community grows."

There is currently a nine- to 12-month waiting period for anyone needing a specialized bed, the WRHA said, with nine people on the wait-list.

"It's too long, way too long," said Rislund. "I don't see why they can't just keep making, finding more beds."

Concern about the wait time for a special needs bed is shared by Faye Jashyn, whose father, Joe McLeod, was the man who pushed Frank Alexander in 2011, causing the fall that led to his death.

"The numbers are going to increase as the population ages, and they only designate so many beds as high-risk or high-aggression," said Jashyn.

"We shouldn't have any aggressive patients needing a bed. They should all get one immediately."

"I feel like there's never enough staff in a nursing home. And when a person is acting out or agitated, their staff should be right there to calm the situation and prevent anything from going from bad to worse," she said.

For residents who have special needs, the WRHA said it increases that to 6.9 hours per resident per day.

Trinidad said the WRHA has instituted an intensive dementia education program for staff that focuses on how to manage difficult and escalating behaviour.

"It's all about the money. And it costs a lot of money to run a nursing home with proper staffing," Rislund said. "The government has a lot of money and they need to put it in the right place."

A spokesperson said the province has plans to add 1,200 new personal care home beds across the province, with particular consideration given to specialized environments for behavioural challenges. 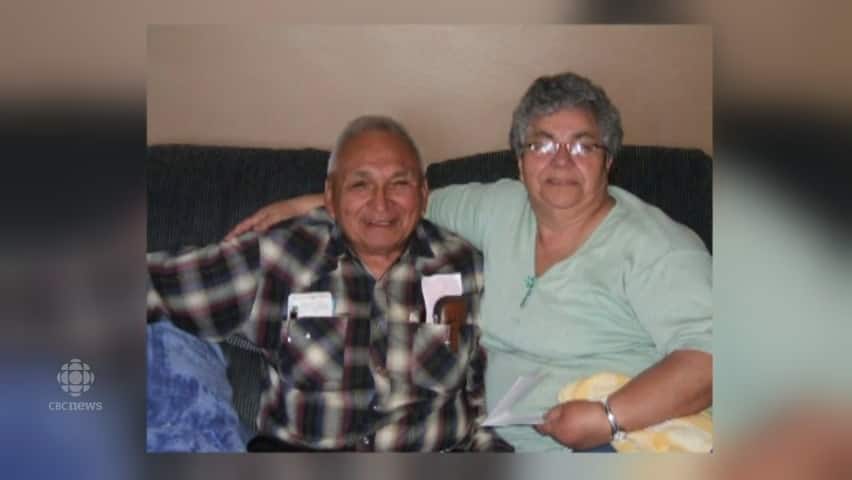 3 years ago
6:04
Long before Alzheimer's took hold of Joe McLeod, and long before he fatally shoved another care home resident, he started a slow mental decline. His daughter, Faye Jashyn, tells his story. 6:04