'I don't want ever to do that again': Police chief says short notice of whiteout parties wasn't good enough

'Sports organizations are very superstitious. They didn't bring this as an event until 4 or 5 days before'

Smyth told the Winnipeg Police Board on Friday that policing nine whiteout parties that grew in size as well as overall downtown crowds that peaked at approximately 50,000 people was challenging, especially given the short notice before the start of the NHL playoffs.

"Sports organizations are very superstitious. They didn't bring this as an event until four or five days before the playoffs," Smyth told the police board.

"I don't want ever to do that again in the sense of planning something with such short amount of time. We've certainly put True North on notice of that, should this ever occur in the future."

Smyth said as many as 250 officers — about 17 per cent of the Winnipeg Police Service's uniformed staff — were deployed to the street parties at any given time. The chief praised officers for ensuring no serious incidents took place at the events and also praised other City of Winnipeg departments and True North Sports and Entertainment for their organization efforts.

Following the meeting, Smyth clarified that True North understands what is meant by being placed on notice.

"I don't want to make that sound too harsh because True North has already acknowledged as a result of this playoff run that they certainly won't wait until four days before the playoffs start again to plan this," Smyth told reporters outside the mayor's office.

"If we were to see ourselves to do something similar in an another year, we would begin that planning process with them months in advance, not days in advance."

Smyth's comments echo statements made earlier this week by Mayor Brian Bowman about how professional-sports organizations are afraid to jinx their playoff chances.

"I think it would be important if someone that they designate someone that can step outside of those superstitions and actually help plan an event like that," Smyth said.

True North vice-president Rob Wozny said his organization is grateful for the city's co-ordination and work on the street parties and said everyone involved learned a lot from the experience.

"Every Whiteout street party was an unprecedented event," he said in a statement, adding True North, the city and Economic Development Winnipeg will talk and look at planning further in advance the next time the Jets are headed to the postseason.

Nonetheless, he cautioned "it's not always possible based on the short scheduling timelines for the playoffs presented to us by the NHL."

The police chief also quantified the cost of police overtime during the whiteout parties at $788,000.

That figure is one factor in a projected Winnipeg Police Service budget overrun of $4.5 million this year. Other factors include lower traffic-enforcement revenue and higher pension costs.

"It will be a challenge for us for the balance of the year now," Smyth said, declining to opine on the question of who should pay for the police overtime at the street parties.

"We are dealing with some things that have put our budget out of whack now. We have time to strategize around that, but I don't have any clear direction on if the city or True North will come to any kind of agreement on that."

"It is an issue about public safety. However, I think a lot of revenues were made by a particular organization within the city and I think it should be a shared endeavour," Sabourin said.

"It's unfair for it to come completely out of the police budget, which it looks like that is the case at this point."

The costs of the street parties are borne by the city, True North and Economic Development Winnipeg, which is funded by the city, province and some private funding.

In addition to the police tab,  the finally tally is expected to include production costs as well as the costs incurred by Winnipeg Transit and the city's public works department. 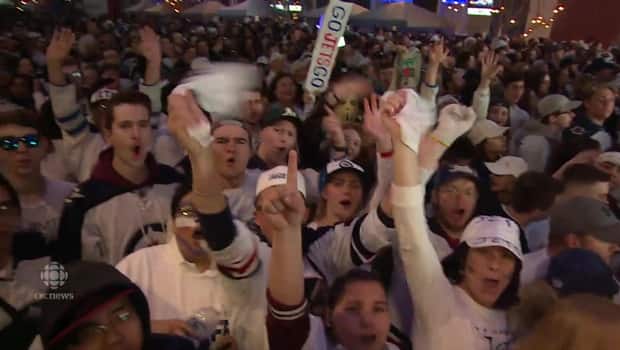 2 years ago
2:02
The Winnipeg Police Service expects to exceed its overtime budget this year as a result of the downtown street parties during the Winipeg Jets' long playoff run. 2:02
CBC's Journalistic Standards and Practices|About CBC News