The Canadian Museum for Human Rights in Winnipeg has not yet opened, but there has already been an exodus of employees, amid allegations of indecision and political interference on the part of management and the board of trustees, CBC News has learned.

CEO denies any political interference in content of Winnipeg-based museum 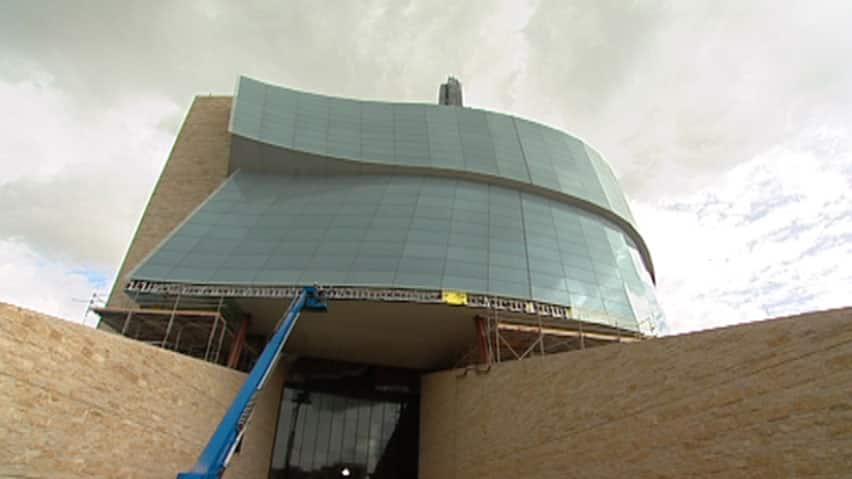 8 years ago
2:29
There has been an exodus of employees leaving the Canadian Museum for Human Rights in Winnipeg, amid allegations of indecision and political interference, CBC News has learned. 2:29

The Canadian Museum for Human Rights in Winnipeg has not yet opened, but there has already been an exodus of employees, amid allegations of indecision and political interference on the part of management and the board of trustees, CBC News has learned.

Of the 38 employees who have left the museum since it began hiring.

There are currently 68 employees still with the museum.

The human rights museum — slated to become the first national museum built outside the Ottawa region — is a $351-million project created in partnership between the federal and Manitoba governments, the City of Winnipeg, The Forks North Portage Partnership and the private sector.

The project was spearheaded by Izzy Asper, the late media mogul, who conceived the idea more than a decade ago.

Construction of the museum began in the spring of 2009 and the museum is slated to open in 2014, about a year later than originally planned because of spiralling construction costs.

A total of about $136 million in private donations were collected as of September, but fundraisers said at the time they still needed to raise at least $14 million more.

CBC News interviewed more than a dozen current and former employees, and many spoke of a toxic workplace and poor morale. All are fearful of speaking publicly because of repercussions or financial penalties.

The museum has placed a gag order on employees that asks them "not to disparage or make negative comments, publicly or privately, oral or written about the [museum], including employees of the [museum]. Any breach of this provision will result in forfeiture of some or all of the settlement proceeds."

However, museum CEO Stuart Murray said the gag order is a standard provision, and the museum wouldn't sue anyone who breaches their contract.

"The fact is, there is no one particular reason why people leave," Murray said in an interview. "All I can tell you is my colleagues in the museum business say that it is a very reasonable number.

"I cannot afford to carry any staff member who is not 100 per cent committed to this project."

However, among those who expressed discontent with the way the museum planning is going was Mary Eberts, a Saskatchewan law professor known for her groundbreaking work on behalf of women's equality.

Eberts, who is the university's Ariel Sallows chair in human rights, resigned from the museum's advisory council in July, saying she was concerned the council wasn't able to have meaningful input into the museum’s design.

Eberts told CBC News museum managers were not really interested in what she had to say, and she had concerns about political interference.

"That was part of the problem. I mean, we weren't hands-on enough, really, to have a sense of what was going on at the grassroots level," she said Friday.

According to her resignation letter, Eberts said the museum's advisory council did not have "any real opportunity to be of influence in the decision-making about the content and form of exhibits."

In the letter, Eberts said the "established decision-making configuration of the board and its consultants" made the advisory council’s ability to influence content "minimal, if not downright non-existent."

Eberts said she was concerned that the museum's mandate — that it be independent of government — is being threatened.

The advisory council was formed, in part, because Murray said it was needed.

"I'm not a human rights expert and have never pretended to be," he said.

Eberts's comments echo the concerns of many current and former employees contacted by CBC News.

They said government and corporate interests may be having an impact on what will ultimately be included in the museum. Staff also said they have been told to include more "positive stories," and to curtail criticisms of issues touching on current government policy.

As well, workers told CBC News, management indecision has led to serious delays in a number of the exhibits and galleries.

In addition, some of the current museum staff said they are actively searching for other jobs.

Murray disputed the allegations of political interference in the content of the museum, and said the board doesn’t dictate terms.

"There is debate and discussion, but the final decision rests with me."

He did, though, indicate that the museum has to have balance, and not be solely concerned with atrocities and violations of human rights.

"This is going to be a museum for human rights, not human wrongs."