A landlord has transformed one of Winnipeg's largest rooming houses from what he says was a dangerous living space into a safe place that's now more like a "quiet senior's home."

Over time a landlord has transformed one of Winnipeg's largest rooming houses from what he says was a dangerous living space into a safe place that's now more like a "quiet senior's home."

Real estate lawyer Richard Fulham currently owns three rooming houses and says the character of the owner is integral to the quality of the space.

"You have to legitimately care about what you're doing, and you can't really fake it," said Fulham.

Fulham has owned at least a dozen rooming homes over the past two decades and says he thinks many people have misconceptions about what goes on in the spaces.

"I think they associate it with violence and criminality. And it's unfair to characterize people in a rooming house as being involved in criminal behaviour," said Fulham, who owns and manages TFG Lakewood Rentals.

"The people here are not [criminals], they're poor people. The typical individual in a rooming house is on permanent disability," he said, adding most tenants are on a tight budget and pay about $400 per month for a suite.

'How do you create community?'

When he bought a 27-unit West Broadway rooming house on Furby Street about 15 years ago, Fulham says it was in bad shape. So he set off to change that.

Tenants basically staged a "mutiny" against the previous landlord in the days before he took over, Fulham said. They burned mattresses in the hallway, there was criminal activity occurring in the building and the space was known to police.

Apart from building renovations and implementing a set of in-house rules of conduct, Fulham says he made it a point to hire a caretaker to regularly tend to the needs of tenants. 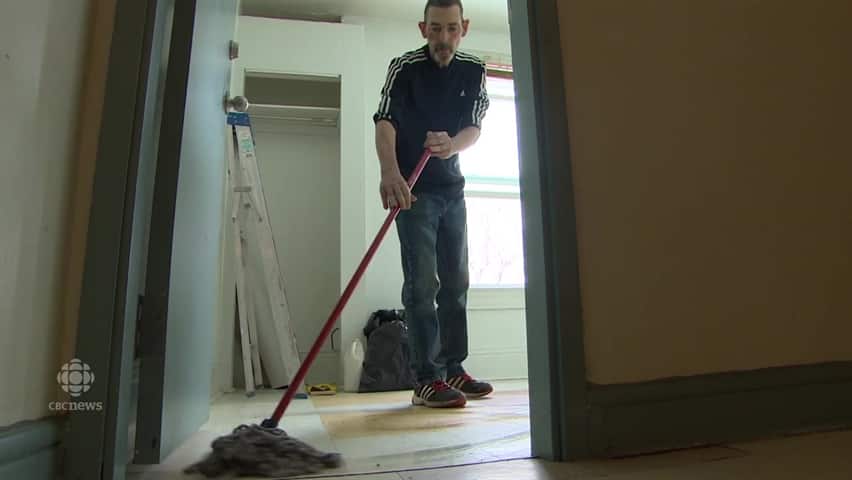 3 years agoVideo
1:50
Over time a landlord has transformed one of Winnipeg's largest rooming houses from what he says was a dangerous living space into a safe place that's now more like a "quiet senior's home." 1:50

Another important aspect of turning it into a healthy living environment for everyone came down to creating a sense of community.

"How do you create community? By not having endless turnover. You have an owner that cares, you do a good job, then your turnover in tenants goes way down, then they get to know one another and there's communal aspect."

Building a sense of community comes with benefits overtime that include a shared sense of ownership for the entire space, he said.

"They take ownership of the common areas, and that is critical," Fulham said.

He also says creating a community cuts down on the job of managing a building.

"The tenants begin to basically manage their own residence. And you as an owner, you still have to keep your hand in it, but 80 per cent of the job is being done by the tenants."

'The only thing affordable'

Tenant Karl Maire moved into Fulham's home about five years ago thinking it would be temporary and is now its live-in caretaker.

Maire worked in the hospitality industry for years and fell on hard times when his marriage ended. He left the industry and went on unemployment insurance after that. He thought he would easily reenter the industry, but when that proved difficult he signed up for social assistance.

The number one rule if you want to be a bad landlord — rooming house or otherwise — is only show up to collect the rent.- Richard Fulham

"This was the only thing affordable for me," he said.

"At first, I was really apprehensive about moving in here. It seemed OK, but I was really concerned about the other tenants. We've all heard the stories about what rooming houses are and I bought into that stereotype."

Those stereotypes and fears faded away a little more each time Maire spent time interacting with his co-tenants. As he got to know them better, cooking in the kitchen or talking in other communal spaces, the tenants became neighbours and friends, he said

"Within the first few days, I realized there's no gang bangers here, there's no drug dealers … it's fairly quiet," he said.

West Broadway Community Organization is currently trying to determine the most up-to-date number of rooming houses in the neighbourhood, but the group assumes it has gone down in the past few years.

The organization, together with the University of Winnipeg Institute for Urban Studies, released a report four years ago that suggested the number of rooming houses in West Broadway sat at just 72 in the neighbourhood, not including those that aren't licensed.

That translates into 736 units, according to the report, which also says most rooming houses were built in the 1900's and house 10 people on average.

The report, Winnipeg's Vanishing Rooming Houses, identified the importance of caretakers for the long-term success of rooming houses. Only three out of 11 rooming houses surveyed in the early 2000s had live-in caretakers like Maire to fix broken windows, faulty pipes and other ongoing repairs, and the average time spent living in a suite in West Broadway was 15 months, the report states.

Maire said the house is safe, in part, due to conduct rules that are in place for prospective and current tenants.

Tenants must respect each other and the space by cleaning up after themselves and not loitering in the hallways. They aren't allowed to make excessive amounts of noise or have visitors after 11 p.m., and no guests are allowed to stay overnight without prior approval.

"I've made some really good friendships in this building, I think they'll be lifelong friendships. We've established a community within a community in this property and that's been a positive thing," he said.

"There's a lot of good people who live in this type of situation. It's a very important part of housing."

Fulham said though rooming houses get a bad rap, they provide an critically important service to people in West Broadway and beyond. He prides himself on forming deeper relationships with tenants than might be common among other rooming houses, even inviting some of them over to his family cottage for holidays like Thanksgiving.

"As you go through life, you can get fulfilment through providing housing to low income people, to knowing that you're doing a good job, to know that the people under your roof are safe," he said.

"The number one rule if you want to be a bad landlord — rooming house or otherwise — is only show up to collect the rent," Fulham said.

With files from Samantha Samson