Being Indigenous and involvement in the child welfare system are two of the most common characteristics of people experiencing homelessness in Winnipeg, the latest street census suggests.

Being Indigenous and involvement in the child welfare system are two of the most common characteristics of people experiencing homelessness in Winnipeg, the latest street census suggests.

The 2018 Winnipeg street census attempted to gather information on as many homeless people in the city as possible. Over a 24-hour period on April 17 and 18, close to 300 volunteers fanned out across the city, encountering more than 1,500 people living on the streets, in emergency shelters or in some other form of provisional housing.

One challenge the researchers faced is that many people experiencing homelessness, particularly women and youth, live in temporary housing arrangements — the "hidden homeless."

The researchers also wanted to get outside the inner city to better understand homelessness across Winnipeg, but didn't find people in those areas who met their definition of homeless.

Volunteers spoke to people in 69 different locations around the city, including shelters, transitional housing sites, bottle depots and community agencies. They also walked along nearly 220 kilometres of city streets, mostly in the inner city.

The majority of people they surveyed were male (65.1 per cent) and Indigenous (61.2 per cent). Half of those surveyed had spent time in Child and Family Services care.

Close to two-thirds of respondents who had been involved with CFS became homeless within a year of leaving care.

"We do have systems that create pathways into homelessness, and then those same systems actually trap people in homelessness. That's where the change is needed," Kehler said.

Max Garneau, 22, has been homeless since he was a teenager.

"I was abandoned by everybody when I turned 18. Everybody — the system, the government, my own family," he said.

He was seized from his mother when he was two, and later adopted by his aunt. He says life was hard growing up.

The report recommends that CFS reform itself from a system centred around apprehension to one that supports communities to take care of children, both within community organizations and extended families.

Apprehension not only leads to homelessness for many children — it can also cause parents to lose their housing when they lose financial supports because the children are no longer with them.

Families Minister Heather Stefanson said in a statement that the province is conducting a review of CFS legislation "focusing on prevention and enabling communities to care for children."

"We are working with agencies and organizations to provide proper planning for children in care to transition into adulthood," she said.

Mental health problems and addictions also greatly contribute to homelessness. Of the 455 youth and children under 29 included in the survey, 85 per cent have symptoms of "high mental health distress," the report said.

"When we're talking about youth and homelessness and mental health issues, we're actually trapping them in a life. Because we also know that the majority of people who have experienced homelessness for 10 years or more also first became homeless as youth."

To help Indigenous people transitioning from living in remote rural areas to the city, the report recommends setting up a system of supports similar to those designed to help newcomers adjust to their new life.

It also recommends increasing Employment and Income Assistance supports from current subsistence levels, and raising the maximum amount a person can earn before supports are clawed back.

Increasing the supply of affordable housing is also key to solving the homelessness problem, the report says. It points out that the federal government launched its national housing strategy this year, which aims to reduce homelessness by 50 per cent.

The Manitoba government needs to match that with its own housing strategy, Kehler said.

"There needs to be far more involvement in the private sector, and that requires the government to incentivize that, as far as making sure rent geared to income are part of the plan," she said.

Overall, we need to change the way we think of people experiencing homelessness and how they got there, Kehler said.

"We need to stop looking at people who are experiencing homelessness as if the fault is theirs." 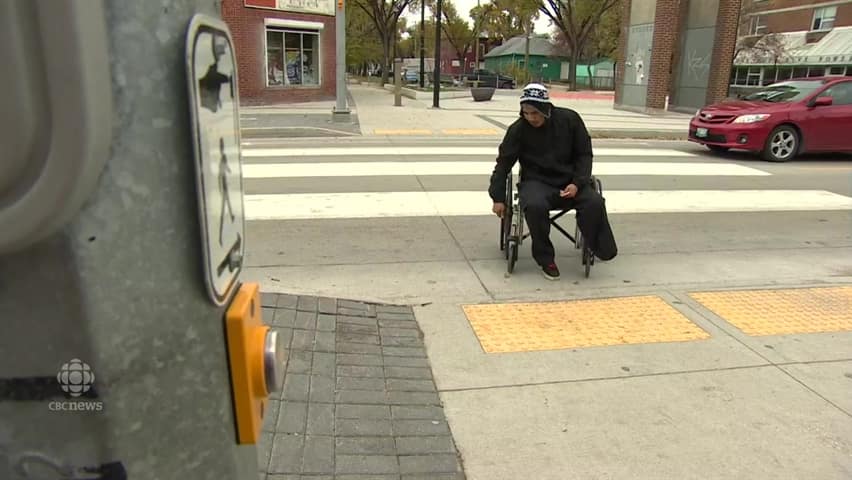 2 years agoVideo
2:20
Latest street census attempts to count as many homeless people in Winnipeg as possible. 2:20