'It is inhumane': Group protests Winnipeg's plans to clear out homeless camps

A passionate group of protesters braved the rain on Wednesday evening to send a message to city hall about its plan to clean up temporary homeless camps along with discarded needles, condoms and human waste.

Dozens of protesters braved the rain on Wednesday evening to send a message to city hall about its plan to clean up temporary homeless camps along with discarded needles, condoms and human waste.

"Labelling the homeless and the needles and the garbage together is dehumanizing," said Alexa Legere, coordinator of Mama Bear Clan, a patrol group that helps the vulnerable people in Point Douglas.

"They should be supporting and seeing what these people need, not ripping away everything they have."

The protesters are calling on the city to cancel its request for proposals for a private contractor to clean up used needles, garbage, mattresses, and tarps left in parks and public places. They take issue with the expectation the contractor will also dismantle homeless camps.

"It is inhumane and it flies in the face of any real move forward towards actually removing poverty and homelessness. Because it's further traumatizing homeless people," said rally organizer, Sharon Johnson.

Kakeka Thundersky who works with 13 Moons, a harm reduction initiative in the inner city, went to the rally with questions for the city. Her organization helps youth addicted to crystal meth.

"Where are you going to go once you've been displaced off Treaty One? That's what they did hundreds of years ago to our people, and now they're doing it again? To me that's just disgusting and just a continuation of colonization. It's still alive and thriving," she said.

A city spokesperson previously told the CBC the request for proposals was issued due to the increasing number of 311 calls about needles and sharps, and the contractor will ensure their safe removal and disposal.

The city will take "all reasonable care" to protect the health and safety of people living in the temporary shelters, city spokesperson Ken Allen wrote in an email to CBC last week. 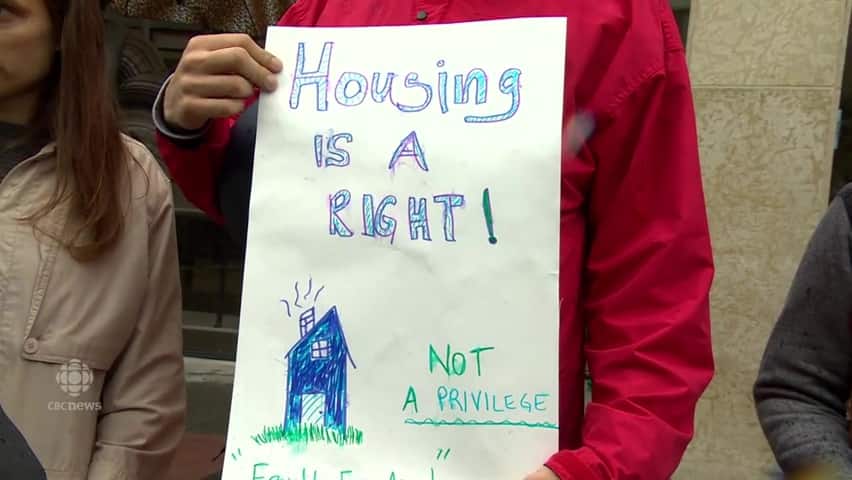 'The most vulnerable people out there': Protesters slam plans to remove homeless camps

2 years ago
1:23
Protesters demanded Wednesday that the city put an end to plans to remove homeless camps in Winnipeg. 1:23

"The occupants are informed that they have 12-24 hours (specified time) to remove their belongings or the City of Winnipeg will remove them. Depending on the situation, the police may be contacted for assistance in resolving he matter," Allen wrote.

While Thundersky supports the cleanup of needles and the groups already doing it, she questions why the city also requires the removal of tents, tarps and mattresses.

"I think that needs to be completely scrapped. It makes no sense to me. Where else are they going to go?" she said.

While people gathered for an hour to voice their opposition, NDP MLA Nahanni Fontaine expressed her disappointment that more Manitobans were not there, "standing up for our most marginalized."

Legere, who was once homeless and is now a leader with the Mama Bear Clan, knows first hand the pain of the people she helps.

"Mental health is a big issue right now, same with addictions so we need to battle that first and support these people, not just up and tear their houses apart."

Johnson cited a case in Abbotsford which found removing homeless camps and shelters violated the Charter of Human Rights and Freedoms because homeless people, like everyone, have a right to shelter and to access and use public spaces.

She vowed the rallies would continue until the city cancels the proposal request. She circulated a petition which will be delivered to the mayor in the coming days.

"No eviction on public land!" she cried, to cheers from the sign-wielding crowd.