A Winnipeg mother and father have been been banned from watching their eight-year-old son play hockey for three years after they got into a fist fight with the opposing team's coaches during a kids tournament in Fargo, N.D., earlier this year. 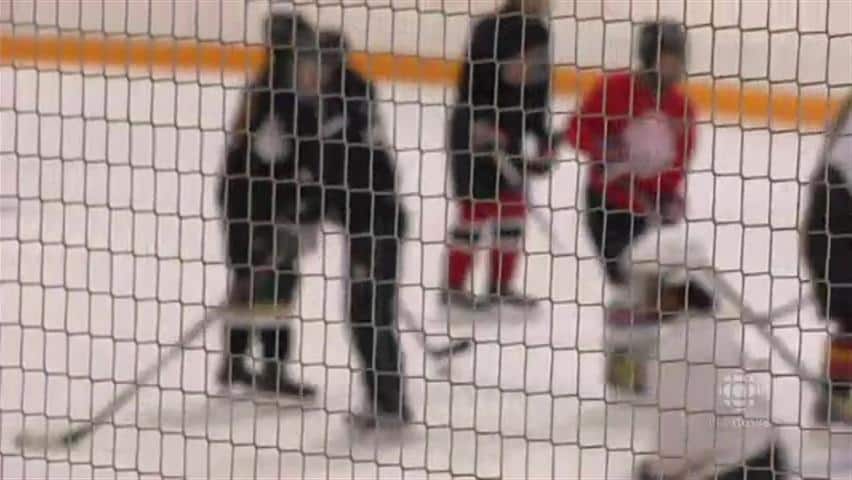 7 years ago
1:53
A Winnipeg mother is speaking out after she and her husband were banned from watching their eight-year-old son play hockey for three years after they got into a fist fight with the opposing team's coaches during a kids tournament in Fargo, N.D., earlier this year. 1:53

A Winnipeg mother and father have been been banned from watching their eight-year-old son play hockey for three years after they got into a fist fight with the opposing team's coaches during a kids tournament in Fargo, N.D., earlier this year.

The parents are appealing the three-year ban, the stiffest penalty ever handed out by Hockey Winnipeg, the city's minor hockey governing body.

"Certainly new for Winnipeg, but based on the circumstances and the information that we've gleaned through the investigation, I felt that we needed to take a strong stance on the issue," Hockey Winnipeg president Don McIntosh told CBC News on Wednesday.

The parents of a player from the River East Royals white team got upset and stormed into the Lord Selkirk dressing room following a game between the two Winnipeg teams in Fargo on Feb. 8.

Hockey officials in North Dakota have said the mother was yelling, and as the Lord Selkirk coaches tried to escort her from the room, the woman's husband went after them.

That's when punches were allegedly thrown in front of eight-year-old players, according to Hockey Winnipeg.

McIntosh said some of the players are still having nightmares about the incident.

"The issue of invading the space of that team, the age of the children, the language, the physical encounter — way, way beyond anything I've experienced," he said.

Hockey Winnipeg has not identified the parents involved or their child.

McIntosh said the parents are not allowed at Hockey Winnipeg games for the next three seasons as part of the suspension, which took effect Feb. 18.

The woman at the centre of the incident told CBC News she takes full responsibility for her actions, and wishes she had handled things differently.

"I don't apologize for wanting to advocate for my son, but I did it in the wrong way," she said Wednesday.

CBC is not identifying the family to protect the identity of the child.

The child's mother doesn't deny going into the opposing team's dressing room after the game in Fargo, but said she did not go in to start a fight.

She said she wanted to talk to the other team's coach about her son's medical condition.

She told CBC News she wanted to say that when players get rough, as she said the opposing team did during the game, they put her son's health at risk.

"My intention was to be proactive and say, 'Next time we play ... please make sure your guys, [that] after the whistle, they don't purposefully try to do anything else.'"

She said it was a discussion she didn't want to have in public, so she went to the dressing room.

"I held the door open with my foot and I just leaned over the edge from the hallway and stuck my head around the corner," she said. "I said I need to see you outside, and his response was 'get the eff out of the room.'"

She said another coach repeated the phrase, then grabbed her by the shoulders and tried to push her out the door. She said when her husband tried to pull his wife and the coach apart, he was immediately hit with fists.

"They call it a suspension, but it feels like a ban," she said. "Or to be treated criminally, is how it feels."

The couple plans to appeal the decision to Hockey Manitoba.

The Fargo case, as well as a recent hockey brawl involving bantam-league players in Stonewall, Man., shows that work needs to be done in teaching respect in sport, says one expert.

But Wayne McNeil, the co-founder of Respect in Sport, said while these types of incidents happen in all sports, hockey-related cases tend to grab the headlines.

"I don't want to write everybody off based on the handful of these things that make it to the front page," he said.

"I do believe that the people involved in hockey, 98 per cent of them, are great people."

Respect in Sport offers an online course aimed at promoting better behaviour in coaches and parents at minor games.

Coaches and parents in Manitoba are currently required to take the course, but McNeil said referees should take it, too.

"To me, that's a no-brainer because referees witness, are a part of, and are … as involved in these types of things as anybody else in the rink," he said.

The Respect in Sport program has also been mandatory over the past three years for hockey parents and coaches in Alberta and in other parts of the country.