The Edmonton Oilers may have taken the big outdoor game in Winnipeg Sunday, but the loss didn't completely spoil the mood for Winnipeg Jets coach Paul Maurice.

Oilers coach convinced grand setting, attention on Winnipeg made for less pressure on away team

The Edmonton Oilers may have taken the big outdoor game in Winnipeg Sunday, but the loss didn't completely spoil the mood for Winnipeg Jets coach Paul Maurice.

"I'm just really proud to be here," he told reporters after the Heritage Classic at Investors Group Field in Winnipeg. "It was great [for] the city of Winnipeg.... The fans are spectacularly enthusiastic about the game, so it was wonderful."

Oilers' goalie Cam Talbot shut out the Jets as Edmonton soared to a 3-0 win over Winnipeg.

The teams hit the ice just before 4 p.m. CT after a nearly two-hour delay due to poor ice conditions caused by the glaring sun.

After the game, Maurice said one of the most memorable moments for him came just before the puck dropped, as he reflected on how much has changed for the club over the years.

"The 'True North' chant that came during the national anthem, I happened to be standing behind [Jets owner] Mark Chipman, who was standing a few rows down taking it all in.… I remember wondering about if he understands the impact he had on the community," Maurice said, adding the Jets franchise has come a long way since re-entering the Winnipeg market in 2011.

Maurice added that he thought his team came out strong in the first period but just couldn't maintain that momentum.

'Easier to be the away team'

Oilers head coach Todd McLellan said the grand setting and attention on Winnipeg likely added a level of pressure to the home team that he doesn't envy.

"It's easier to be the away team, I am convinced of that now," he said at a post-game news conference. "Both teams did a good job of putting it all aside and participating."

The game was tied 0-0 at the end of the first period, but the Oilers went on to net two goals in less than two minutes around the midway mark of the second to make it 2-0.

Oilers' winger Zack Kassian made it 3-0 near the end of the second frame as he burst out of the penalty box and hammered home the final goal of the night against Jets' goalie Connor Hellebuyck.

It was a tough loss, but Winnipeg fans just could not get rid of the grins on their faces after the excitement of hosting the Heritage Classic. 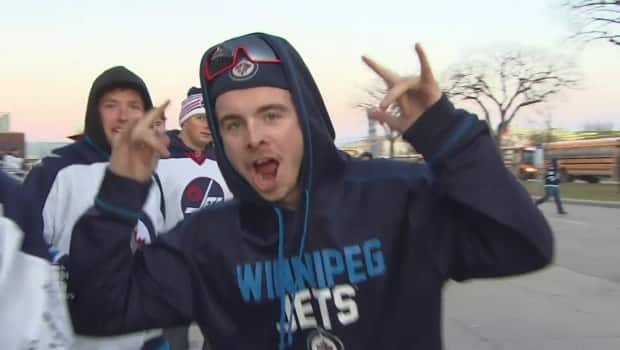 4 years ago
0:42
The Jets loss 3-0 to the Oilers Sunday, but Winnipeg fans just could not get rid of the grins on their faces after the excitement of hosting the Heritage Classic. 0:42

"Heartbreaking.... It was awesome," Kevin Chartrand said. "The atmosphere was still there, even though we didn't go home with it."

"I wish it was a different turn out, but we enjoyed it," Spence said.

Oiler centreman Connor McDavid said he was happy to get the chance to play in the Heritage Classic and add another chapter to the decades-old rivalry between the two teams.