The Hells Angels motorcycle club is now formally listed as a criminal organization in Manitoba — the first of any government in North America to make that designation. 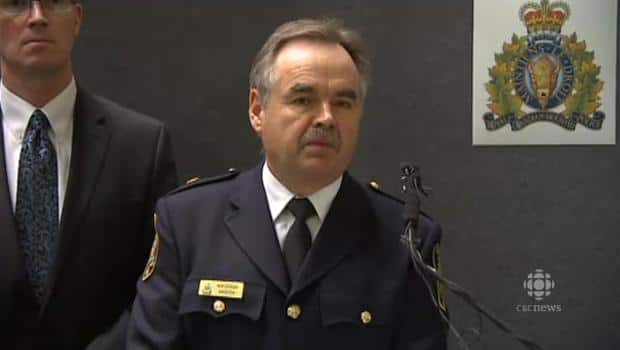 7 years ago
2:06
The Hells Angels motorcycle club is now formally listed as a criminal organization in Manitoba — the first of any government in North America to make that designation. 2:06

The Hells Angels motorcycle club is now formally listed as a criminal organization in Manitoba — the first of any government in North America to make that designation.

“We’ve had successful prosecutions against the Hells Angels but that doesn’t seem to stop them. They just keep trying to get back into business,” said Insp. Rick Guyader of the Winnipeg Police Service. “As long as they continue, we’re going to continue prosecuting them.”

​It means police no longer have to prove the motorcycle gang is a criminal organization at every court hearing.

​“This is a milestone for Canada and a clear signal that Manitoba will continue to develop and use every tool available to fight criminal organizations and the threat they pose to Manitobans,” said Manitoba Justice Minister Andrew Swan.

“It is now law in Manitoba the Hells Angels Motorcycle Club is a criminal organization.”

This designation follows an extensive application filed by the province’s director of policing last spring to have the club designated as such. The application was based on extensive evidence collected from across Canada, information from organized crime experts and court findings from across the country, according to Swan.

“The Hells Angels motorcycle club was actually given the opportunity to come forward and present some evidence to suggest they were not a criminal organization,” said Swan. “As I understand it, there was no response to that.”

On Friday, defense lawyer Jay Prober said he didn't think the change would amount to much. Prober has represented alleged Hells Angels members in the past.

"I don't think it was necessary. It's window dressing, but it makes good politics and gets votes," said Prober.

He added, "I doubt this piece of legislation will withstand a constitutional challenge."

Prober said a criminal designation label on any group won’t trump an individual’s rights in court because the Crown will still need to prove its case.

RCMP D Division Assistant Commissioner Kevin Brosseau said while Prober is right in that it won’t affect criminal charges, it does give police and Crown prosecutors help in civil and provincial court cases.

“Rather than having to prove for civil processes that the Hells Angels are a criminal organization that [will now be] a given,” said Brosseau. “Those days and weeks that will potentially be needed to gather evidence for that will not be needed for the civil side.”

To get the designation, the legal process included an independent external review panel, which is made up of at least three people who are not government employees or currently serving as police officers. They examined all of the materials and determined the motorcycle club met the test of being a criminal organization.

“Organized crime is not welcome in the province of Manitoba,” said Brosseau. "The RCMP has prioritized enforcement efforts to focus on eliminating organized crime and this announcement today provides us another tool in our tool kit to help us ensure the safety and well-being of Manitobans.”

When criminal organizations are added to Manitoba’s Schedule of Criminal Organizations, it will result in more swift and effective enforcement of provincial laws, states a news release from the Manitoba government.

Profile of the Hells Angels

The Hells Angels Motorcycle Club (Hells Angels or HAMC) is the largest outlaw motorcycle gang in the world, with over 5,000 members in over 400 chapters in more than 40 countries.

Hells Angels rules require chapters to have a minimum of six members on the street without any court-imposed conditions. Several Canadian chapters are inactive due to the majority of their members being incarcerated.

The following is a profile of the HAMC’s operations which identify it as a criminal organization.

Evidence from numerous Canadian trials reveals the Hells Angels are highly structured to ensure conformity to their rules, prevent infiltration by rivals and police, and to maintain effective criminal operations. Courts have found that chapters are not independent entities but instead conform to rules and work collectively to meet the broader objectives of the HAMC.

Full patch members seek to insulate themselves from police and rivals by using subordinate members and associate gangs to commit or facilitate crimes and protect HAMC assets.

Membership is an incremental process over years to test a recruit's loyalty and prevent infiltration by police or rival gang members.

Internal Hells Angels records show that photos and information about potential new members are distributed across the country to try to identify unwanted members.

The colours of the Hells Angels are formed by the term ‘Hells Angels,’ the club’s death head logo and red and white lettering. These items have been trademarked in numerous countries.

Only a full patch member can wear the Hells Angels logo and vote on club issues and strategies. Courts have noted the ‘power of the patch’ worn by the Hells Angels, since it has been used to intimidate and create fear from the public and gang rivals.

As a result, some courts have declared items displaying these identifying colours to be forfeited as offence-related property.

Clubhouses are the base for each Hells Angels chapter. Courts have noted they are generally fortified and equipped with strong security measures.

Courts have ordered Hells Angels clubhouses forfeited as instruments or proceeds of crime in Ontario (Toronto, Thunder Bay and Oshawa), Halifax and Quebec. Several other clubhouses, including one in Winnipeg, have been seized pending criminal property forfeiture applications.

Manitoba and Saskatchewan have also used provincial laws to order the removal of fortifications from Hells Angels clubhouses as they are a public safety threat.

Hells Angels and their associate groups have been found with counter-surveillance equipment designed to detect police listening devices, sensitive justice documents on gang rivals and information about police investigators.

The Hells Angels use subordinate criminal organizations to commit or facilitate crimes and advance their interests. This also helps to identify potential new members of the Hells Angels.

For example, several members of one of the Manitoba Hells Angels’ support clubs, the Zig Zag Crew, have moved up to become full members. Gang wars in Quebec, Manitoba and Ontario have highlighted the roles played by these associate groups.

Manitoba’s Zig Zag Crew and Redlined gangs have been convicted for drug and other crimes in support of the Hells Angels.

Courts in Quebec, Ontario and Manitoba have found the Hells Angels to be a criminal organization in dozens of individual criminal prosecutions.

Hells Angels have a long record of violence in Canada including the murder of two justice officials in Quebec in 1997, a gang war with the Rock Machine in Quebec that resulted in an estimated 150 murders over the course of a decade, and extensive drug trafficking and related crimes in Manitoba.