Manitoba saw its largest one-day jump in COVID-19 cases since mid-April — announcing five new ones on Thursday — but the province's top doctor says not to read too much into that.

Largest 1-day jump since 12 new cases on April 11, but 'can't make much out of single days like this': Roussin

Manitoba saw its largest one-day jump in COVID-19 cases since mid-April on Thursday, with five new cases announced — but the province's top doctor says not to read too much into that.

Despite the slight spike, Manitoba still appears to be on track to ease some restrictions next month, said Chief Public Health Officer Dr. Brent Roussin.

"We can't make much out of single days like this. We want to continue to follow the trend," he said.

A dozen new cases were announced on April 11, but since then, the number of new cases each day has ranged between zero and four.

"It's not only the case count we look at. We're going to be interested to see if these are cases that are connected to known contacts, or there may be household contacts in here, which makes the significance to community-based transmission much less," Roussin said.

All five of the new cases announced Thursday are in Winnipeg, including two people in their 20s, two in their 30s and one person in their 80s, Roussin said.

Seven people are now in hospital with COVID-19, two of whom are in intensive care. The number of deaths in the province connected with the illness remains at six.

There are 82 active cases and 174 people in the province who have recovered from COVID-19 as of Thursday.

As Ramadan begins, Roussin urged Muslims in the province to maintain physical distancing and not hold any in-person gatherings.

Lanette Siragusa, Shared Health's chief nursing officer, said Manitobans are making use of services available to fight the spread of the coronavirus, noting the Health Links phone line received 8,000 calls in the past week. The average wait times have been two to six minutes, she said.

Roussin said the province is still looking to ease some of the restrictions imposed because of the pandemic. He has previously said Manitoba would likely look at Saskatchewan's lead, since the two provinces have a similar epidemiology.

Saskatchewan on Thursday announced that golf courses, retail stores and hairdressers could reopen in there in May.

Roussin said that resembles Manitoba's plan, which is in development. If the number of new cases appearing daily remains as low as it has, the loosening of restrictions could happen in May, he said.

Non-essential businesses, child care, and other types of businesses are all being considered in a rollout plan that will be based on case numbers, Roussin said, adding that high-risk people returning from travel wouldn't be able to attend any newly-opened businesses until they had been through an incubation period.

However, he noted that any plan developed is "subject to change based on our numbers."

"We need to do this in a guarded fashion and follow our numbers very closely," Roussin said.

People who can work from home should keep doing that even when the restrictions are loosened, he added.

On Wednesday, Roussin said the province had ramped up its COVID-19 testing, with an aim of reopening the economy. Testing now open to anyone still working outside the home and displaying any symptoms of the illness.

Asked on Thursday if there are plans to open testing to asymptomatic people, Roussin said no. 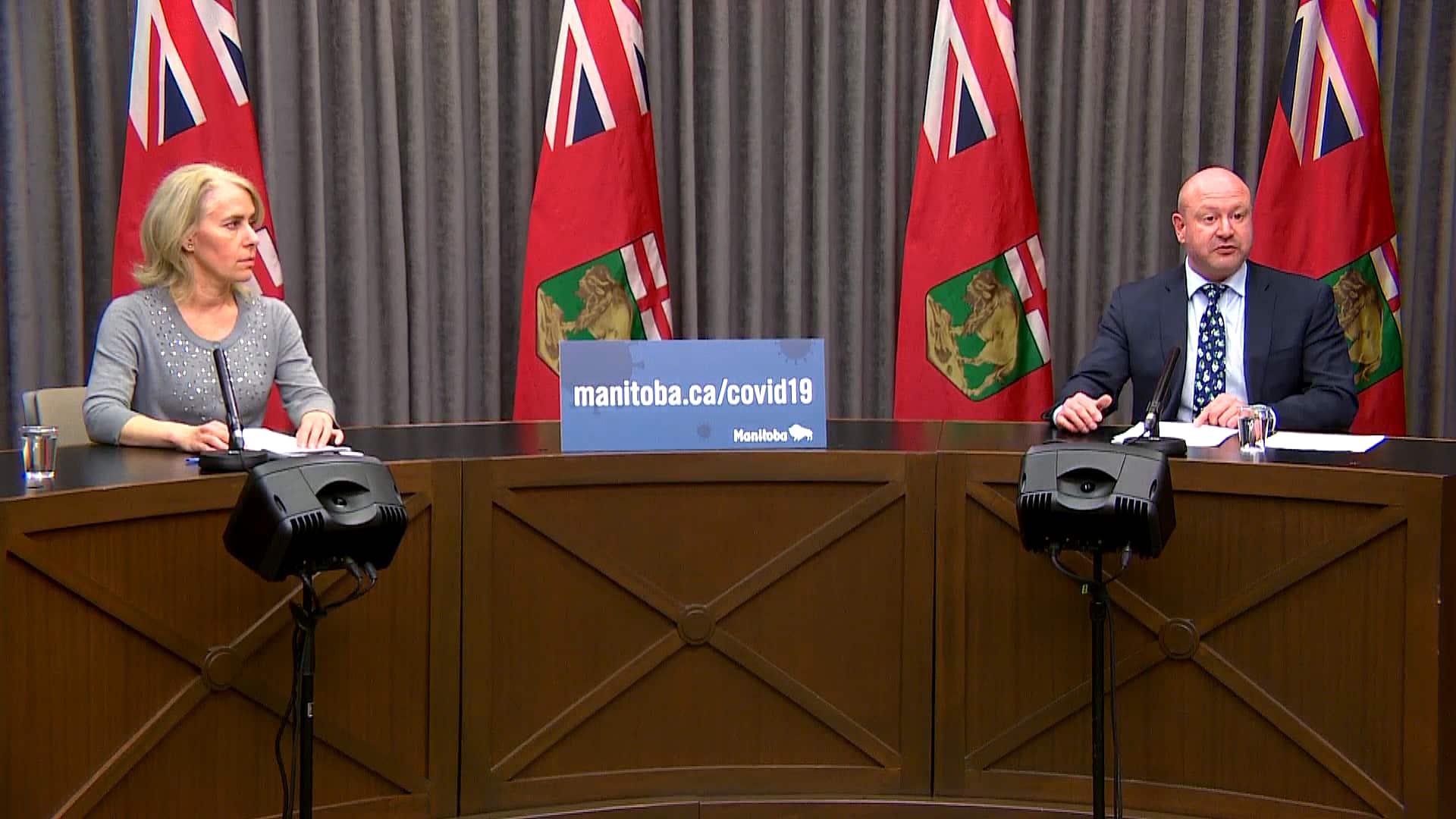 "Testing is not valuable in asymptomatic individuals so that's not likely a place that we'll be expanding to. Right now our testing criteria are quite expansive, so anyone could be referred for testing or tested by any clinician who felt that their client should be tested," he said.

"It's open to pretty much anyone who's still working. So it's it's pretty vast right now. But the next step could include the families of anyone in critical services."

Manitoba has been working to increase its supply of personal protective equipment, and got a boost to that end this week.

The province received a shipment of 150,000 disposable isolation gowns, which were unloaded from a chartered Air Canada plane at the Winnipeg airport earlier in the week.

We’re proud to be able to help in the fight against COVID-19 by facilitating the supply chain. On Tuesday, a cargo shipment of 150,000 disposable isolation gowns arrived at <a href="https://twitter.com/hashtag/YWG?src=hash&amp;ref_src=twsrc%5Etfw">#YWG</a> to help keep frontline workers safe so they can continue to protect and service our community. <a href="https://t.co/mLIlAbzwE6">pic.twitter.com/mLIlAbzwE6</a>

"This is a substantial shipment and we are very happy to have it on the ground here in Manitoba," Siragusa said. "We will continue to explore all options to secure personal protective equipment for our front-line staff."

Many of the gowns have already been sent for distribution to the health regions that need them most, she said.