The fight for sobriety behind bars: 4 inmates share their story

They've spent close to a lifetime drugging up the demons that haunt them — and committing countless crimes to pay for those drugs. But four inmates at a provincial jail say a unique treatment program is helping them slay those demons and preventing more crimes.

They've spent close to a lifetime drugging up the demons that haunt them — and committing countless crimes to pay for those drugs.

But four inmates at a provincial jail say a unique treatment program is helping them to slay those demons and prevent more crimes.

"I'm living proof that this is a crude, cruel world, " Jeremy Raven told CBC. "I suffer from trauma. I suffer from addiction. I've lived a destructive lifestyle … I don't want that anymore."

Raven, along with fellow inmates Jason Walmsley, Victor Favel and Stefan Nevistiuk, agreed to meet with the CBC from the confines of a cold, cinder block room inside Headingley Correctional Centre. They admit they're nervous — facing cameras, wearing microphones and sitting under hot lights is not a comfortable fit for the four men who are more familiar with the dark shadows of past offences.

But something's happened behind bars and they want to talk about it. They're all participants of the Winding River Therapeutic Community.

We're facing these demons inside of us while we're sober. That's the huge thing here.- Victor Favel

In the world of addictions recovery programs, Winding River is an anomaly. It's one of just two in Canada offered inside a provincial jail (the other one is based in a Nanaimo, British Columbia corrections facility).

As the name suggests, it's community-based. Literally. Participants live in a separate facility, still in jail but away from the general population in the "blocks."

It's not court-ordered — there are no legal benefits to take part in it. Inmates must apply to be accepted, and even if they complete it, they don't score extra favour in any post-incarceration probation conditions.

Winding River is not new (it's been offered at Headingley since 2013), but it's new to Walmsley, Favel, Nevistiuk and Raven. Despite being incarcerated multiple times in the past, this is the first time they've taken part.

And despite attending other treatment programs throughout the years, they all say this one is a game-changer.

"This is an emotional situation for me," Raven said quietly. "Winding River has been the best experience of my life."

"Until you deal with the root cause of it, you're not going to get very far," Walmsley says.

If you don't heal what has hurt you, you'll continue to bleed on people who never even cut you.- Jeremy Raven

"If you don't heal what has hurt you, you'll continue to bleed on people who never even cut you," Raven said.

It could also be a life-saver, they say.

The program is intense: It's broken into four phases and can take up to a year to complete.

There are classes every weekday involving cognitive behavioural therapy and emphasizing personal accountability.

"Guilt and shame" could be on the agenda one day; then "shame and regret" the next day, Walmsley said.

"And it's not a simple couple of words you write down on a piece of paper and you're done," Walmsley said. "You have to dive deep."

It's not easy; they're expected to dredge up the pain of their past.

"My mom left this world when I was 11," Favel said. "She was leaning against the bathtub when I was coming into the bathroom. I thought she was sleeping, but she wasn't. When I went to shake her, she was stiff as a board. That's when I realized she was dead."

They're then expected to come clean with their past.

"Once I started using meth, on a very high dosage … my mentality completely changed," Nevistiuk said.

"I lost all my morals. And the more bad things I did, the less my conscience would tell me that they were wrong."

Eventually, they're expected to stare down the past.

"We're facing these demons inside of us while we're sober," Favel said. "That's the huge thing here."

The men don't want to talk specifics when it comes to the crimes they've committed; they don't want to risk revictimizing the victims, they say.  But there is a lot of emphasis on victim empathy.

"One of the assignments was to write an accountability letter," Walmsley said. "I myself wrote a letter to my ex-fiancée, my accountability. And in a jail mentality, that's insane. You don't hold yourself accountable for anything."

All four admit they have almost nothing to lose. What little they had — children, partners — they've since lost.

They also acknowledge that those who are still in their lives might have to be out of their lives. The drug addicts, the gang affiliates — they've all got to go.

You're a meth user? You attract other meth users. You need to change that.- Stefan Nevistiuk

"You attract who you are," Nevistiuk said. "You're a meth user? You attract other meth users. You need to change that."

There is the occasional exception to this rule. Favel and Raven are stepbrothers and now they're each other's inspiration.

"One of the reasons why I wanted to come to this program was because [Jeremy] was pushing for me to get here," Favel said.

"I watched him graduate from Winding River last month and it was more than enough for me to want to graduate, too."

"For me, it's a generational thing. If we don't change now, it's going to carry through our children, nieces, nephews, my brother," he said.

The fear of relapse looms large in their minds.

"The scariest thing for me is this thing that's called the 'eff it' attitude," Nevistiuk said. "We have a setback and we go 'eff it' and we go back to the drugs or alcohol. That's the thing I'm afraid of."

That's why the last stage of the long program includes relapse prevention. Each participant creates a game plan to follow for when the going gets tough outside in the real world.

"Do you have that full blown relapse or do you have that slip and go back to trying to fix yourself?" Nevistiuk said. "You work on a relapse management plan and you present it."

Their motivation to succeed is strong.

I don't want my kids to find me OD or something from a bad shot of drugs.- Victor Favel

Favel does not want history to repeat itself; "I don't want my kids to find me OD or something from a bad shot of drugs."

Nevistiuk hopes his son sees him in a different light; "He said 'Dad, I'm so glad you're getting help.'"

Walmsley wants to make things right with those he's wronged; "It's going to be a lifelong process. It's a good thing, though."

Raven says for the first time in his life, he's the man he never knew he could be.

"I grew up in a community where addiction and gang life were all I knew," he said. "But once I came out here, it changed. Now I don't have to hide who I am.

"I stand here and demonstrate both vulnerability and courage when admitting I am an addict. For me, that's real. That's the truth and this is who I am." 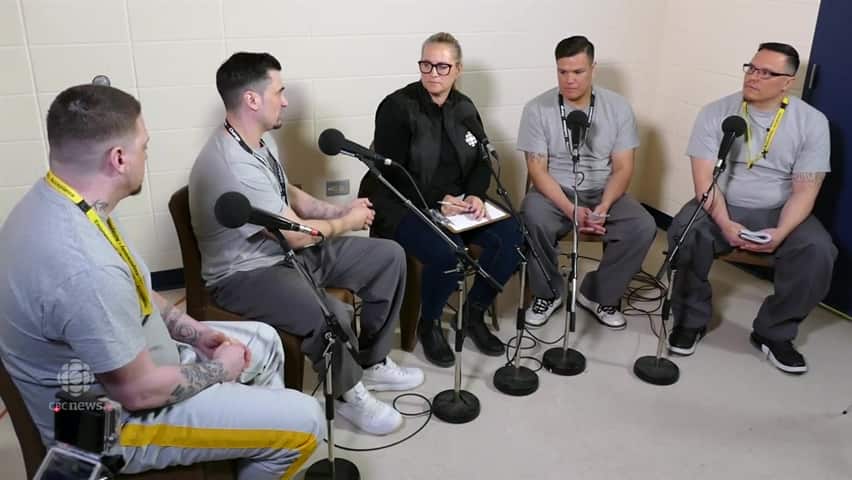 1 year ago
3:21
Four inmates from Headingley Correctional Centre say a unique treatment program is helping them fight their addiction behind bars. 3:21 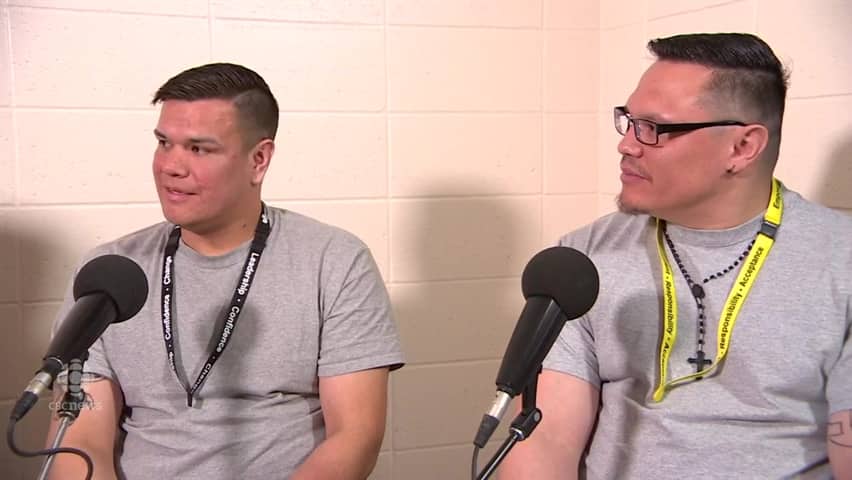 1 year ago
4:18
Four inmates from Headingley Correctional Centre say a unique treatment program is helping them fight their addiction behind bars. 4:18