Winnipeg is going ahead with Mayor Brian Bowman's growth fees in spite of warnings of impending legal action from developers and complaints from a minority of councillors about last-minute changes to the plan.

Council asked 'Do you want to see your names on a statement of claim?' 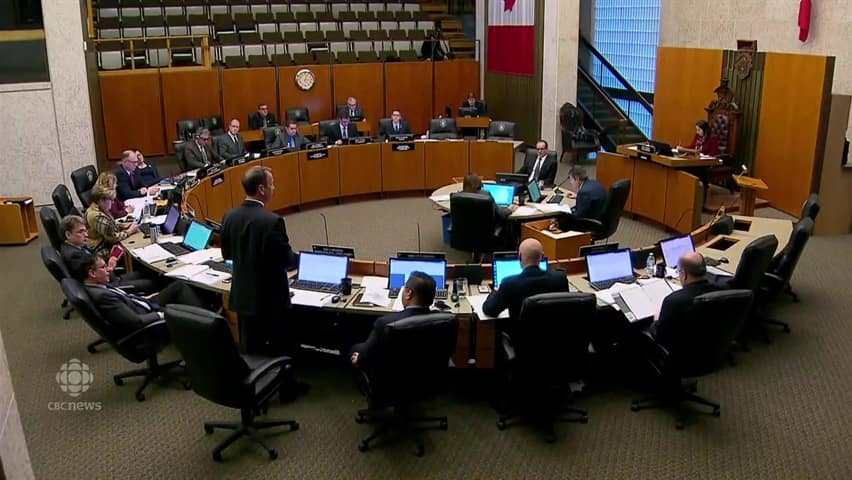 4 years ago
2:00
City council voted 10-6 on Wednesday afternoon to approve an amended version of a development-charge proposal originally unveiled by the mayor and council property chair John Orlikow (River Heights-Fort Garry) in September. 2:00

Winnipeg is going ahead with Mayor Brian Bowman's growth fees in spite of warnings of impending legal action from developers and complaints from a minority of councillors about last-minute changes to the plan.

After several amendments, the latest version of the plan calls for the city to begin charging ​development fees on residential projects in a handful of designated areas at the fringes of the city on May 1. After additional study, the fees would be applied to industrial, commercial, institutional and office developments in 2018 and then to residential infill developments in older and mature neighbourhoods, including downtown Winnipeg, in 2019.

It also caps future fee increases at the rate of five per cent and gives council the power to approve what projects are financed from the proceeds of the new fee. Orlikow has estimated that revenue to be somewhere between $7 million and $10 million during the latter seven months of 2017.

Bowman told council he looks forward to refining the plan over the next three years, with the help of a growth-fee working group.

"We need to be building Winnipeg for the future, today," Bowman told council. "Delay for delay's sake only pushes the tough decison on to others."

The vote took place after more than five hours of delegations and debate. Growth-fee proponents portrayed the new charges as a long-overdue means of ensuring new developments in Winnipeg pay for themselves. Opponents said they support the idea of development fees, but called the existing plan severely flawed.

Developers and construction-company representatives spent two months trying to convince Bowman and the rest of council to hold off on the plan, both on the grounds their industries need more time to prepare for fees and because they say the plan was conceived hastily, based on faulty data and without proper consultation.

They appeared before council en masse on Wednesday, filling the west gallery in the council chamber and part of the east gallery at the start of a meeting that began with a song of hope by Coun. Jason Schreyer (Elmwood-East Kildonan) in lieu of the customary prayer.​

"I would have expected something this big, which will affect planning for years to come, would involve the planning department," said Carruthers, lamenting the fact the growth-fee plan was led by the city's corporate finance department.

Carruthers called the amended growth-fee plan an "arbitrary attempt to phase in something that isn't popular" and urged the city to take a step back and develop a better plan.

Steek said council will face a legal challenge if they proceed. "Do you want to see your names on a statement of claim?" he asked during a speech that earned a standing ovation — ruled out of order by council speaker Sharma — from the gallery.

Moore said he has already instructed his legal counsel, John Stefaniuk at Thompson Dorfman Sweatman, to commence legal action against the city on the grounds the city has no legal basis to impose the fees.

"What we think we'll do is prove the proposed bylaw is illegal," Moore said. "The advice we have is the city does not have the authority to impose it."

Qualico vice-president Eric Vogan said his firm has also directed its legal counsel to look at the city's bylaw.

But the Pallister government — which has already obtained legal opinions of its own — is holding off on taking any action, for now.

"Our government will monitor the legal process and review our options moving forward," Indigenous and Municipal Relations Minister Eileen Clarke said in an emailed statement.

Downtown Winnipeg BIZ board member Sachit Mehra spoke in favour of the fees, but conceded under questioning from Gillingham that he opposes growth fees in downtown Winnipeg.

Lukes, one of the six councillors who voted against the fees, said she found it ridiculous the maps indicating the areas that will be subject to the fees on May 1 were being amended the morning of the vote.

"You know what this makes me think of? This makes think of 'get 'er done,'" she said, referring to a comment attributed to former Winnipeg chief administrative officer Phil Sheegl in the scathing external audit of Winnipeg's fire-paramedic station replacement program.

Gillingham also weighed in on the last-minute map amendments, arguing they demonstrated the city isn't ready to proceed with growth fees.

Orlikow countered city planners came up with the map and resisted the gerrymandering efforts of politicians. He also expressed disappointment with the lawsuit threats from the development industry.

Those threats made it difficult to negotiate with developers, argued Orlikow, asserting he was the only person who suggested some concrete form of action.

Other councillors who voted in favour of the fees said it's unreasonable for the city to spend more time developing a fee just to satisfy the development community, especially when the city has spent years considering the idea.

"You can't consult forever," said St. Vital Coun. Brian Mayes. "At some point, you go forward with a plan."