How Gordie Howe and the WHA transformed the business of hockey

As Canadians and hockey fans around the world remember Gordie Howe, the CBC's Cameron MacIntosh looks back at how the legendary NHLer, as a member of the rival WHA, changed professional hockey forever.

After retiring from NHL, Howe went on to change professional hockey with 'rebel league'

It was infamous for its blue pucks, bouncing cheques and folding franchises.

At its heart was a 46-year-old "retired" NHLer, on his way to becoming MVP, playing with his two sons.

It sounds like a novelty act, but that was the World Hockey Association in January 1974, halfway through its second season.

It was the rebel league that had the audacity to challenge the NHL and change professional hockey forever.

Gordie Howe, who has died at the age of 88, was central to all of it.

Watching a film from that time, it's hard to tell it was even winter in January, because it was a sunny day in Houston and the city was starting to go hockey mad.

Inside the Houston Aeros locker room, "Mr. Hockey" — two years removed from the NHL — explained to a CBC-TV reporter why he was no longer in Detroit.

"To be honest with you, I wasn't truly happy with what I was doing in Detroit, anyway," Howe explained quietly. 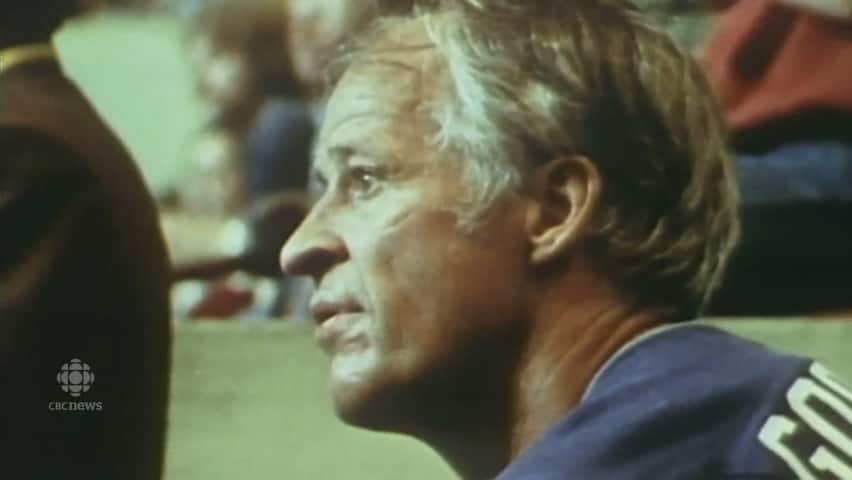 Game changer: How Gordie Howe and the WHA transformed the business of hockey

5 years agoVideo
2:22
As Canadians and hockey fans around the world remember Gordie Howe, the CBC's Cameron MacIntosh looks back at how the legendary NHLer, as a member of the rival WHA, changed professional hockey forever. 2:22

After 25 years with the Red Wings and four Stanley Cups, an arthritic wrist had effectively ended Howe's career in 1971, when he was 43. Detroit gave him a job in the front office, but no real power.

"All I had to do was the crossword," he said. "They are going to run the club their way."

Howe had also been out on the banquet circuit for two years, making speeches, signing autographs and taking pictures with kids. There's even a famous black-and-white photo of him from 1972, wrapping a stick around a skinny 12-year-old from Brantford, Ont., who was tearing up a local minor hockey league.

That fall, the WHA shook up the hockey world: For a million dollars, it lured Bobby Hull away from the Chicago Blackhawks to play with the Winnipeg Jets.

Hull became hockey's first millionaire and was credited with establishing the league, but it took another name to put people in the seats: Gordie Howe.

"When the opportunity came to come to Houston, I really jumped at it.… They paid me more than I was asking," he said. "I wanted to play with my kids."

"Signing the Howe family was a great sort of reminder in a very huge way that the WHA is here to stay," said Howard Baldwin, former WHA president and founder of the New England Whalers, which later signed Howe in the league's final seasons.

For a while, with two stars in Hull and Howe, the WHA seriously challenged the NHL for talent. Salaries were driven up as the league offered players leverage. Howe's influence was changing the business of hockey.

"We did as much, if not more, for player salaries than any one thing I can think of," said Baldwin.

Joe Daley thinks so too. He was a goalie for the WHA Jets, and said with Howe in the league, he never felt the WHA was second-rate.

"There is no doubt he added credibility," said Daley.

"He wasn't there to take, steal the money. He performed well, brought more credibility to the league than many people think."

At the very least, no professional hockey player was convinced to take a new hockey jacket over a raise, as Howe famously did once in Detroit.

Still, all through the '70s, the hockey establishment did its best to discredit the WHA as a sideshow. Today, the Toronto Toros, Los Angeles Sharks and Indianapolis Racers are all but forgotten footnotes in hockey history.

But there was also some serious talent. Howe once said his first three years in the WHA were better than his last three in the NHL.

"There's two aspects to it," said Ed Willes, author of Rebel League, a history of the WHA.

"One is the heartwarming story of the father playing with the two sons. The other is the high, high level he was still playing at at an advanced age — which is, to me, the more incredible part of the story."

He saw that kid from Brantford again in the WHA All-Star Game.

The kid had turned 18 and playing centre between Howe and his son Mark, wearing the number 99 and representing the Edmonton Oilers, one of four teams, including Winnipeg, Quebec and Hartford — home of Howe's Whalers — that were about to be absorbed into the NHL.

Willes has a hard time imagining the NHL would have ever considered any of those teams without the influence of Howe and the WHA.

"One of the biggest contributing factors was bringing the game to those smaller cities that never had a chance before in the NHL," he said.

"I think it certainly made people realize these are great markets and should have NHL."

Of course, no one foresaw that in that locker room in Houston in 1974.

But in the end, he arguably did more to change the business of pro hockey by chasing blue pucks in a rival league than he did in the NHL.

Cameron MacIntosh is a senior reporter with CBC National News based in Winnipeg.