The death of Gord Downie hits close to home for Winnipegger Jared Spier, whose partner, Joanne Schiewe, died from the same brain cancer that took the Tragically Hip frontman.

People will understand glioblastoma more because of Downie, Winnipegger says 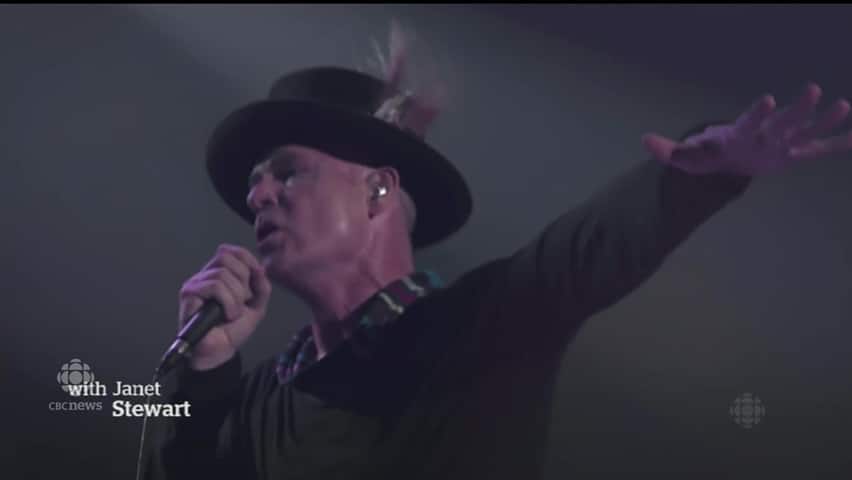 Outpouring of grief, memories for Gord Downie in Manitoba

3 years ago
8:44
Outpouring of grief, memories for Gord Downie in Manitoba 8:44

"He was such a kind, soft man," North Wilson said. "He loved to hug, and when you talked to him he looked into your eyes."

Schiewe's death came just weeks after she saw the Hip, her favourite band, play their final concert in Winnipeg.

Spier said Schiewe was inspired by Downie and what he accomplished after his diagnosis. She knew exactly how difficult it would be to get up on stage while going through cancer treatments, he said.

When the band played Schiewe's favourite song, Courage, she sang as loud as she could, despite having little voice left, Spier said.

"She wasn't loud but she was screaming," he said, also lauding Downie for being able to find the strength to perform.

"He did really, really well to be able to get out on that last tour. You could see the energy it took out of him during the shows, but at the same time, I think he did a great job of just being brave and live a normal life as much as he could."

The fact he was out on tour while going through treatment helped Schiewe find her own strength to push forward, Spier said.

"One of the biggest things I appreciated about Jo was her ability to just push on, and not just wait to die, as horrible as that might sound."

Schiewe's death came 18 months after her diagnosis because it was caught so early, Spier said, noting his grandfather died seven weeks after being diagnosed. Downie did a great deal to bring attention to the disease and make those suffering from it feel less isolated, while educating the wider public, Spier said.

Because the survival rate is so poor, there aren't many living champions out there helping people understand glioblastoma — what it is, what it does, how quickly it takes people, he said.

"It happens so fast, you don't get to share the story, sometimes," Spier said. "With Jo, she was lucky that she had some time, and with Gord, we were lucky that he had some time and got to shed a light on it."

Downie became the most high-profile example of how devastating it can be "to just watch someone struggle and fade," Spier said.

Downie's strength also helped Darren Sawchuk, a Winnipeg musician who was in a Tragically Hip cover band and died in March after battling cancer, said his friend and bandmate Kristjan Kristjansson.

After being diagnosed with cancer, Sawchuk quit his job as a lawyer, bought 25,000 records and opened a record store. His favourite band was the Tragically Hip and he was also at the show in Winnipeg.

Sawchuk got up on stage and sang Hip songs as part of a fundraiser for cancer research.

"I can't speak for Darren, but I will say that Darren felt like he was up for the fight and he had another friend [in Downie], in the distance, to fight this with," Kristjansson said.

"Gord was so strong in his battle and I'm certain it helped Darren a lot."

North Wilson first met Downie last fall during a trip to northern Ontario, shortly after the Hip played a show for a hometown crowd in Kingston, Ont., that was viewed by millions across Canada.

The performance, and Downie's words to fans on the importance of reconciliation efforts with Indigenous Peoples, touched North Wilson.

"I had been greatly impacted by his words of standing up for Indigenous people and the plights that we've gone through," she said. "It was really important for me for him to know that he was appreciated."

North Wilson tweeted at the time that she was thankful Downie used his platform to help.

From that tweet came an invitation from Alvin Fiddler, Nishnawbe Aski Nation grand chief, to thank Downie in person during a visit to a northern Ontario First Nation.

North Wilson joined Downie and others who were filming documentary footage for The Secret Path — a multimedia project dedicated to shedding light on residential schools and Canada's historic mistreatment of Indigenous children and families by telling the story of Chanie Wenjack, who died while trying to flee from a residential school.

"Just watching Gord meet and interact with the family and the community members, it was for me a true picture of reconciliation," North Wilson said, adding she truly valued everything Downie did in the final months of his life to advance the issue of reconciliation.

"Nobody asked him to do that, nobody made him do that. He did that on his own and he was such a good friend to Indigenous people. And he became a good example of what we should all be doing to try and achieve reconciliation."

With files from Margaux Watt