Millions of flying insects have taken over Gimli, Man., with storefronts, signs and sidewalks covered with clinging critters that locals call "fish flies."

Residents and tourists note large number of the insects, which are actually burrowing mayflies 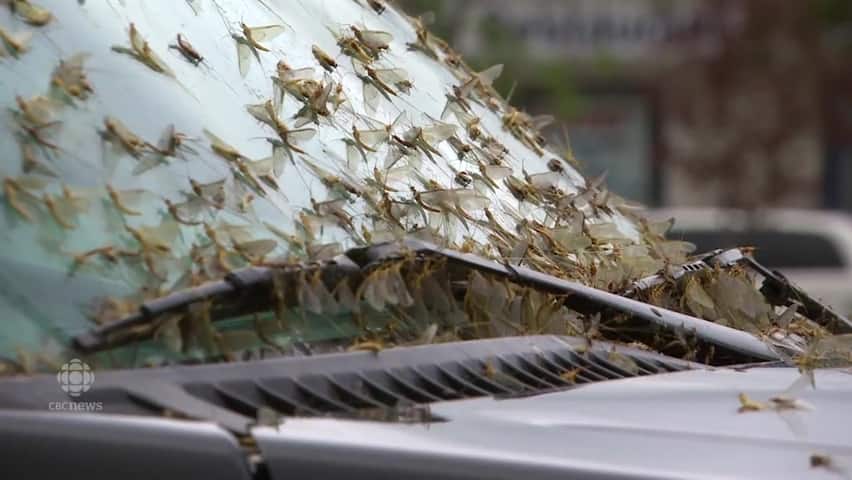 Millions of flying insects have taken over Gimli, Man., with storefronts, signs and sidewalks covered with clinging critters that locals call "fish flies."

The Gimli park patrol supervisor says fish flies appear every year in Gimli, but in all of his 41 years he doesn't recall seeing this many.

Two days ago, Finnbogason had to get his staff to shovel piles of the dead insects off boardwalks and sidewalks. They filled 42 garbage bags the first day, he recalled.

He added that there's something else that comes with the bugs.

"The bad thing about fish flies comes the smell. And if you're not familiar with it, it's pretty much open up a fish and take a whiff," he said.

Tourists Christine Robillard from Quebec and Dan Harwood from the United Kingdom say they have never seen anything like it.

"Never! Never. In Montreal we get them on the bridge sometimes but not as many," Robillard said. "We've been taking pictures. It's quite impressive."

"Everyone seems really cool about it. But it really seems like a bit of a plague going on," Harwood added. "But I guess they're kind of cute."

'They're quite a remarkable animal,' says expert

"Mayflies are quite unique in the insect world because they're one of a group of insects that moult as adults," Galloway said.

Galloway explained that there are two stages to adult mayflies. In the first stage, the adult is cream-coloured.

"They're not ready yet to reproduce in that stage. They actually have to shed their skin. They have to moult and then they emerge as this sort of reddish-brown form," he said.

Galloway suggests a science project of sorts — collecting a few of the cream-coloured mayflies in a jar and watching the adults shed their skin in a matter of minutes, right before your eyes.

"They're quite a remarkable animal, if it wasn't for the big pile of stinking mass that you get on your property," Galloway said.

Finnbogason said fish flies are just something that comes with being on the lake.