A Manitoba mother is urging parents to ensure their children have the flu shot, after an autopsy on her young son revealed the H1N1 influenza virus was in his lungs. 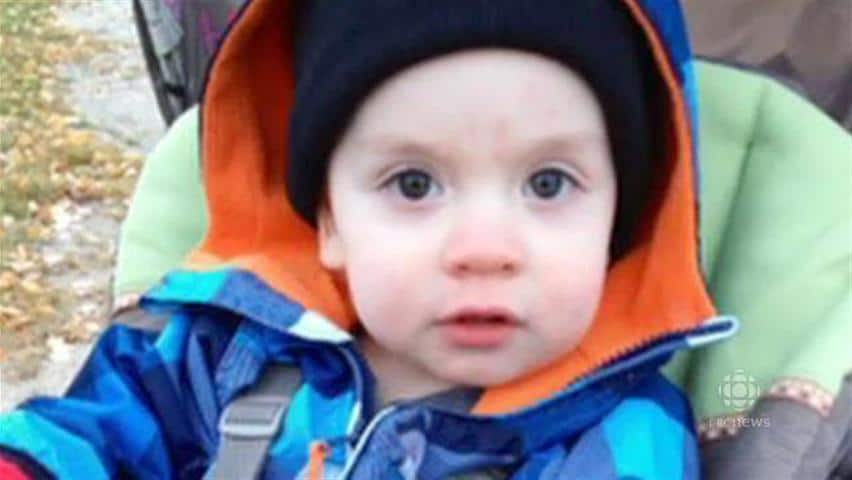 7 years agoVideo
2:07
Manitoba mother is urging parents to ensure their children have the flu shot, after an autopsy on her young son revealed the H1N1 influenza virus was in his lungs. 2:07

A mother from Gimli, Man., is urging parents to ensure their children have the flu shot, after an autopsy on her young son revealed the H1N1 influenza virus was in his lungs.

Michelle Prymych's 19-month-old son, Kylan Lux, was found dead in his crib on the morning of Dec. 12.

Prymych said her son's death was swift and unexpected. Video footage she captured of Kylan the night before showed a robust and playful toddler.

Every day since has been a bit dreamlike, said the grieving woman.

"I always find myself, like, checking my shoulder, like, you know what I mean? Like an instinct [because] you're a mom [so] you're always like, 'where is he? What's he doing?' That's the hardest," she said.

After weeks of wondering how Kylan died, Prymych said provincial health officials called her on Wednesday with a potential clue: the autopsy on Kylan indicated the H1N1 virus was present in his lungs.

Manitoba's chief medical examiner's office confirmed on Friday that there was a "positive H1N1 biopsy" in a 19-month-old child.

Officials cannot confirm whether the virus killed the toddler, only saying they are continuing to explore "all avenues" for the cause of death.

While the role of the H1N1 virus in Kylan's death is not clear, Prymych said parents should not take any chances with their children's health.

"Get your kids vaccinated; yourselves, too, not even just kids," she told CBC News Thursday night.

"It's important. A lot of people don't do it anymore, and they should. They need to do it.

"It can happen to anybody. Everyone thinks, 'Oh, it won't happen to me' or 'I can't catch that.' But anybody can."

Prymych said she is haunted by "what ifs."

"Like, what if I would have known about it sooner? What if he had it? You know what I mean?" she said.

"I go through my mind with it — the what-ifs and the hows. Every day I ask myself."

Sergio Fanella, a pediatric infectious disease specialist from the University of Manitoba, said while it's very rare, children can die from the flu.

"It's certainly in the realm of possibility. It's not what we usually see," he said Friday, adding that children under the age of five are more susceptible to the virus.

"Both the Canadian and American guidelines recommend that the influenza vaccine can be started as young as six months of age," he said.

Prymych said in the weeks following her son's death, all of her friends have arranged to get flu shots for their children — something she wished she knew more about earlier.

Kaitlyn Delbridge, a friend of Prymych, said she booked an appointment for her four-year-old child to get vaccinated as soon as she heard about Kylan's death.

"It's been hard watching Michelle go through this every day. I don't want to ... be the person that goes through this," Delbridge said.

"Like Michelle said, don't make it an option. Like, it has to get done ... you need to protect yourself and your children."

Delbridge said more information about the flu shot needs to be made available.

Both Manitoba Health and the Winnipeg Regional Health Authority said on Friday that they have seen increases in demand for flu shots in the last 24 hours.

Manitoba Health has distributed 355,000 doses of the annual flu vaccine for the 2013-14 season and has ordered more doses, according to a government spokesperson.