An Indigenous leader and mentor at the centre of a multi-billion-dollar lawsuit against the federal government over Indian Day Schools has died.

An Indigenous leader and mentor at the centre of a multi-billion-dollar lawsuit against the federal government over Indian Day Schools has died.

"He was always a champion and an advocate of our people in various areas," Assembly of First Nations Manitoba regional Chief Kevin Hart told CBC Up to Speed host Ismaila Alfa Tuesday.

He was born on Lake Manitoba First Nation and was fluent in the Saulteaux Ojibway language.

"He was just a small boy of six or seven years old when he began attending the Dog Creek Day School on his First Nation. Mr. McLean has said the school bell rang at 9 a.m. and at 9:05 a.m. he was getting the strap because he did not know how to say 'good morning' in English," the Assembly of Manitoba Chiefs said in a statement.

In 2009, he became the lead plaintiff in a $15-billion class-action lawsuit against the government of Canada.

About 200,000 Indigenous children attended the federally run day schools beginning in the 1920s.

This past December, McLean and government officials announced they had come to a tentative agreement.

"I know you may not know some of the damages that have happened, and for me, I forgive you for that, because for me without forgiveness things stay the same," he said at the time.

Watch McLean talk in December after the announcement: 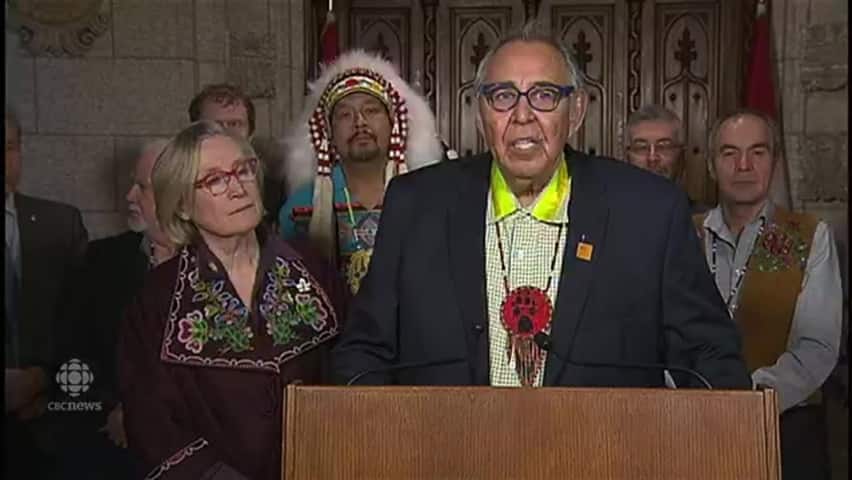 2 years ago
1:37
Lead plaintiff Garry McLean speaks to reporters after the announcement of an agreement to settle a class-action lawsuit on behalf of students at Indian Day Schools. 1:37

"If it were not for Garry McLean, along with his colleagues at Spirit Wind, and their incredible efforts, I don't know if this class-action lawsuit would be where it is today," Glenn Hudson, acting grand chief for the Assembly of Manitoba Chiefs, said in a statement.

"For that our citizens should be grateful for his leadership."

McLean previously served as a board member of the Indian and Métis Friendship Centre in Winnipeg, an important cultural hub and gathering-place for the local Indigenous community.

McLean was most recently working as an adviser to the Southern Chiefs Organization Grand Chief Jerry Daniels in Manitoba.

Hart knew McLean for 27 years. The loss leaves a "large void to fill" in the local First Nation community, he said.

Hart said McLean served as political adviser to numerous grand chiefs, including himself.

McLean helped Hart on the campaign trail last year as he ran for and won a second term as AFN regional chief.

The pair also worked together on the recent Main Street Project development of a drop-in warming centre for those in need of shelter during harsh Winnipeg winter nights, said Hart.

"That would be probably one of his last legacies, that Garry McLean really saw on the impact here in Winnipeg, not only on the First Nation and Indigenous community but for everybody as a whole," he said.

"Recently with the inclement weather that we had, it was very dangerous for our people and that's where Garry McLean's heart was, it was with those people, the less fortunate, the homeless."

McLean believed in the power of faith and prayer and will be missed, said Hart.

"Garry McLean always greeted you with a smile and a handshake, and when you left he would always tell you, 'God bless you,' and he would greet you with that same love and affection that he did [with] each and every person," said Hart.

"He's going to be forever remembered as the champion that brought this day school settlement forward."

Treaty 2 Grand Chief Eugene Eastman said McLean will be remembered for his work as a band councillor, social worker and civil servant.

"It is with great sadness that we acknowledge the passing of elder and warrior Garry McLean from Lake Manitoba First Nation," Eastman said in a statement.

"Our hearts are filled with sadness today. Garry was a true warrior, helped our people and fought for our people. He will be remembered fondly for his work and his laughter. From all of us at Treaty 2 we wish him well on his journey to the spirit world."

A number of politicians and prominent figures in the Indigenous community paid respects on social media for McLean and his family.

I am very saddened to hear of the passing of Elder Garry McLean. Garry was instrumental in fighting for the Indian Day School case. He was tireless in working for First Nation peoples and always had a smile on his face. Thank you for your strong friendship and leadership, Garry! <a href="https://t.co/igkgGjpuKn">pic.twitter.com/igkgGjpuKn</a>

I am saddened to hear of the passing of Elder Garry Mclean. My sincere condolences go out to his family and friends. Garry always took the time to talk with me and share a hug. I will miss his smile and his laughter. Rest in peace Garry. <a href="https://t.co/58T5ZYF8rO">pic.twitter.com/58T5ZYF8rO</a>

With files from Wendy Parker