The chief and council of Garden Hill First Nation plan to march to demand better conditions for fire evacuees in Winnipeg.

Some Indigenous leaders want the province to declare a state of emergency and free up more hotel rooms for people who have fled forest fires in the north.

Demanding better conditions for fire evacuees, the chief and council led a march from the Winnipeg Soccer Federation's Winnipeg Soccer North indoor complex on Leila Avenue to the steps of the Manitoba Legislature, starting at noon Thursday.

Chief Dino Flett of Garden Hill said people living in close quarters in emergency shelters in Winnipeg have been getting sick.

For nearly a week, they've been sleeping on cots laid out in a grid with minimal bedding after wildfires forced a full evacuation of Wasagamack First Nation and partial evacuations of Garden Hill and St. Theresa Point First Nations.

"Place them in hotels as soon as possible, because with the current conditions, even kids contracting colds from one another, it's starting to escalate," Harper said.

They want the province to declare a state of emergency and do more to make hotel space available for elders and people with health problems.

Evacuees also face a possible mumps outbreak. One person in Brandon tested positive for mumps and a handful of others have come forward with symptoms resembling the illness.

"Our first couple days was OK, but when you're staying there for a long time it's getting stressful," he said.

More than 1,000 people were initially put up in large shelters in Winnipeg in the RBC Convention Centre and the soccer complex. The Canadian Red Cross says it has been transferring people to hotel rooms as they become available, and only about 300 people remain at the shelters.

Shawn Feely, vice president of Manitoba and Nunavut Red Cross, said they are working with the three communities to make sure those who most need a hotel room have first priority when one opens up.

"As soon as hotel rooms become available they're offered and they're split between the three communities," he said. "To my knowledge I have not heard of anyone being not offered a hotel room from a vendor because they're an evacuee."

Feely is hopeful more hotel rooms will be opening up soon now that all evacuees from Poplar River have returned home.

Premier Brian Pallister said declaring a state of emergency is up to the federal government.

"That's not my call," he said Thursday, adding, "it's a deplorable situation and I applaud the people doing all they can."

In total, around 4,200 people were forced from their homes in the three First Nations. 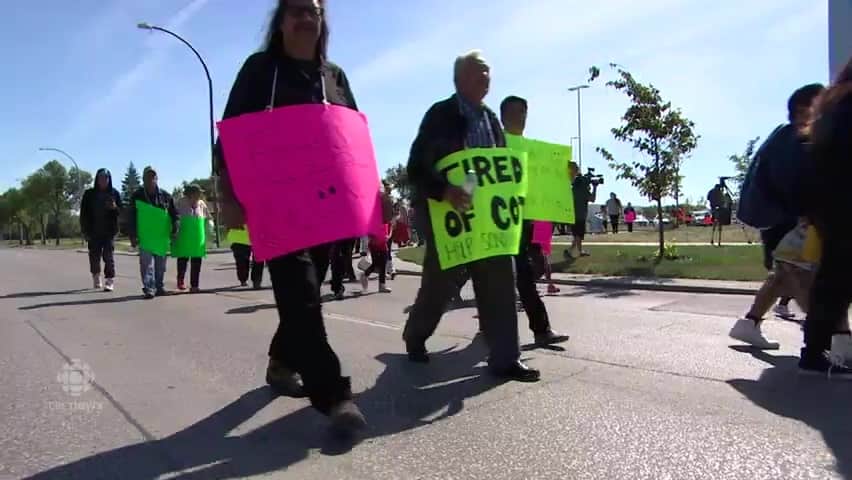 3 years ago
1:55
Some Indigenous leaders want the province to declare a state of emergency and free up more hotel rooms for people who have fled forest fires in the north. 1:55