Communities across southern Manitoba got rocked by harsh weather today, and some Gimli residents say gale force winds led to some of the biggest waves on Lake Winnipeg in recent memory. 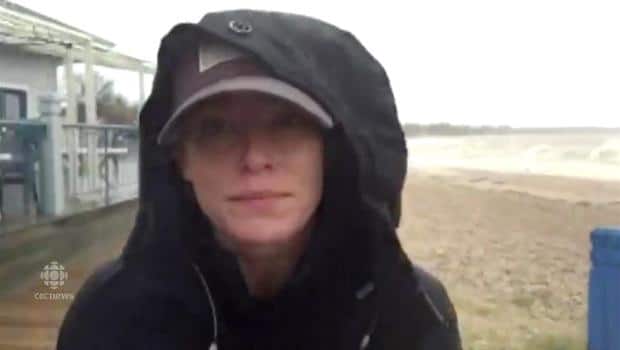 6 years agoVideo
0:51
Communities across southern Manitoba got rocked by harsh winds and hard rain Sunday, and some Gimli residents say the gale force winds led to some of the biggest waves on Lake Winnipeg in recent memory. 0:51

Communities across southern Manitoba got rocked by harsh weather Sunday, and some Gimli residents say gale force winds led to some of the biggest waves on Lake Winnipeg in recent memory.

CBC's Jillian Coubrough visited Gimli, where two-metre-high waves were crashing into the shoreline and over the pier.

Wind gusts in the 80 to 90 kilometre-an-hour range drove rains sideways across the lake surface through Gimli and Winnipeg Beach.

The only people Coubrough and CBC cameraman Travis Golby saw outside at the pier braving the inclement weather were onlookers in rain gear trying to snap photos or take videos of the massive waves.
1 of 0

"We just came down to look at the waves," said Valerie Hesketh. "They're just absolutely awesome, which isn't a word I would normally use anyway, but they're totally awesome today."

Doug Taylor and his family came to Winnipeg from Montreal for the May long weekend.

"We were told there were some beautiful beaches in and around Lake Winnipeg, so we decided to come for a family beach day and this is what we came to see."

Nearby at Winnipeg Beach, Judy Werier's cabin and deck were damaged after a tree crashed down from the wind.

"This massive spruce tree landed on our cottage about 10 feet from where we were sitting," she said. "It was terrifying. I was running around in circles saying 'oh my god, oh my god.'"

Werier said she was thankful no one was hurt.

"The roof is damaged and the siding is damaged, and an old oak tree on the other side was smacked, but not bad," she said. "The main thing is if it had gone right through [the roof] or if we were on our deck we would have been toast."

Gimli Mayor Randy Woroniuk said there were fears about shoreline erosion and that properties might get damaged from high waves. Were it not for low water levels on the lake this spring, Woroniuk said the cleanup facing Gimli residents in the aftermath of the poor weather would've had the potential to be a lot worse.

Those cleanup efforts are expected to start Monday.