From begging for food to culinary sensation, one roti at a time

Jamaican Manitoban's childhood recipes lift her 'from the ghetto, from nothing ... it's amazing'

Christine Pattison pushes her hair back from her face as she plates the ackee and salted cod fish — with a side of festival rolls.

To some, the fruit, fish and carribean dumplings are a hot taste of Jamaica in the cold of Manitoba. To Pattison, they're a life saver.

"In order to survive in Jamaica, you have to find a way for people to like you, and everybody love you when you can feed them," she says. 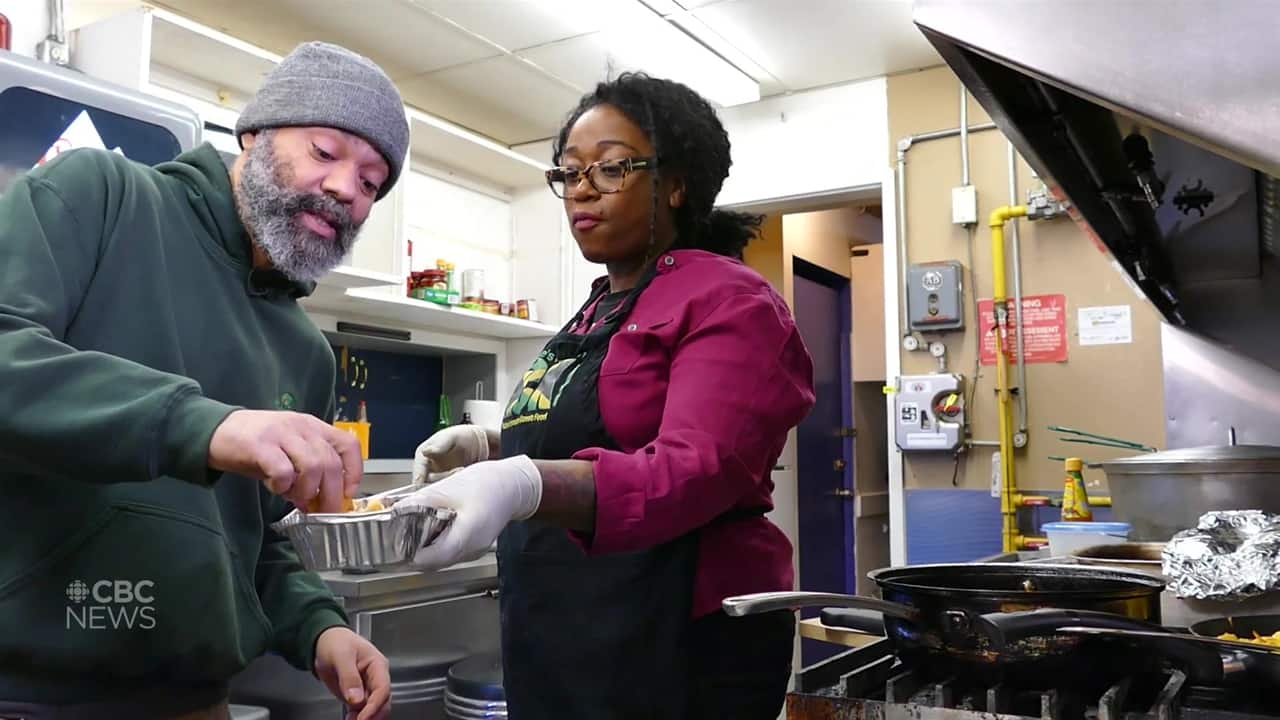 1 year ago
4:45
Christine Pattison (aka Miss Christine) shares her story of life in 'a ghetto' and how recipes from her childhood paved her way to success. 4:45

"Everybody started talking about 'Christine can cook, she can cook,' so they would come and buy food," she adds.

In 2020, it's her cooking that's now catching the attention of chefs across the country. In early February she participated as a contestant on Wall of Chefs — a nationally televised food competition.

"It's an amazing thing to have people rave about my food," she says. "They loved it."

Once, I thought I cooked the dumplings properly, but I didn't ... I got a beating like there was no tomorrow.- 'Miss Christine' Pattison

Pattison, or 'Miss Christine' as she likes to be called, agreed to share the story of her past and present with the CBC's Ismaila Alfa to mark Winnipeg's Black History Month 2020.

She works in a small, deliciously scented space, incongruously located in a Winnipeg hotel best known for its strip club, that she's transformed into Miss Christine's Kitchen.

While prepping food for the lunch crowd (her oxtail stew is a fan favorite), Pattison explains how her own history is helping her to make history.

"It's like Jamaica and food goes hand-in-hand, because food is what always what brings people together," she says. "Even if there's a war going on, if it's through death, food is the stuff of life and that's what brings community together."

Pattison was just eight years old when she first learned how important that was.

Growing up poor, in a small town south of Kingston, she spent weekends at the farmers market, begging for whatever fruits and vegetables the vendors would give the small little girl in the faded pink dress.

"That was the only dress I had," she says. "So I'd wash it and run down the street with my dress in my hand until it's dry."

WATCH | 'Miss Christine' shares a story of her childhood efforts to feed her family: 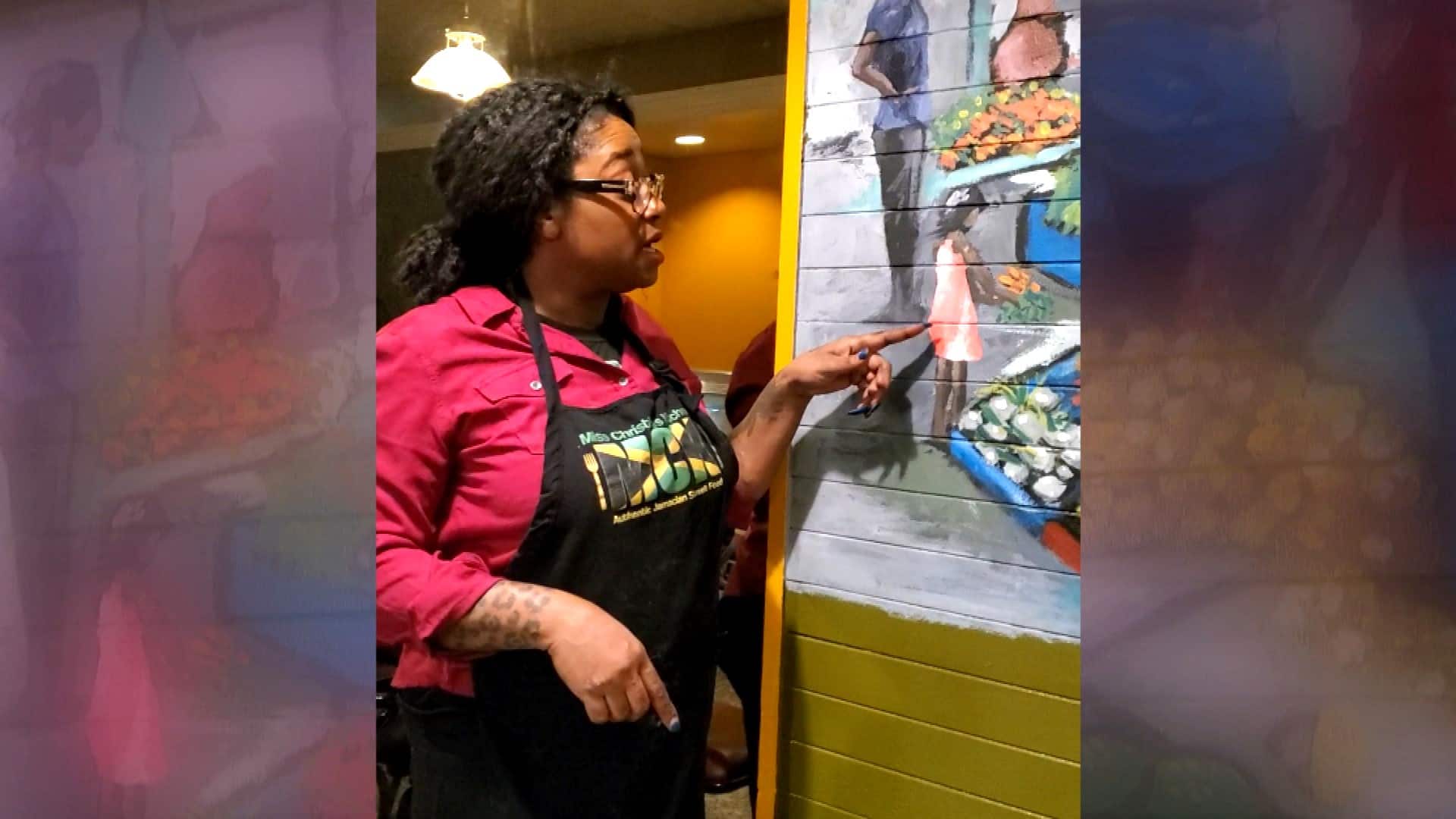 From begging for food to selling food

At night, she'd sleep under the stars, close to the vendors, who'd keep an eye out for her. Come Monday, they'd chip in to pay the 'pushcart man' to take Pattison home to her family.

"They would pay money to take me home, because I couldn't carry all that food with me," she says.

Once home, Pattison would learn her true lifesaving skill: cooking. Food being scarce, and money even more so, her mother's cooking lessons could be grim.

"Once, I thought I cooked the dumplings properly, but I didn't," she recalls. "And I got a beating like there was no tomorrow."

An early marriage to a "sweet guy" from Canada led her to small town Manitoba.

But the resulting years of racism (her children, she says, were repeatedly called the n-word at school), juggling multiple low paying jobs and an eventual divorce took their toll.

"To the point where I figure 'this is just killing me,'" she says. "I went into a depression, I was on pills, I end up quitting on my jobs."

Her saving grace? She began to cook again. And word got around.

Soon, she was cooking for friends, friends of friends and complete strangers.

In the fall of 2019, she seized the chance to open Miss Christine's Kitchen, a small restaurant located in Winnipeg's Chalet Hotel.

Months later, she heard about Wall of Chefs — a Food Network tv show that pits cooks across the country against each other.

The stakes are high, and the prize is $10,000. And while Pattison sent producers an audition video, she figured she was a long shot — she thought it was a hoax when they called her back and offered her a spot.

Win or lose, however, Pattison's celebrating the culinary history she's making in her own, personal way.

Money is still tight and the bills still pile up, she says. But the now-grandmother of five is thriving in her born-again success, spreading the love of food love from her childhood.

For more on Christine Pattison's story, tune into CBC Manitoba's afternoon radio show Up To Speed, with host Ismaila Alfa, on Monday, Feb. 24 at 3 p.m CT.