French-immersion interest on the rise in Winnipeg 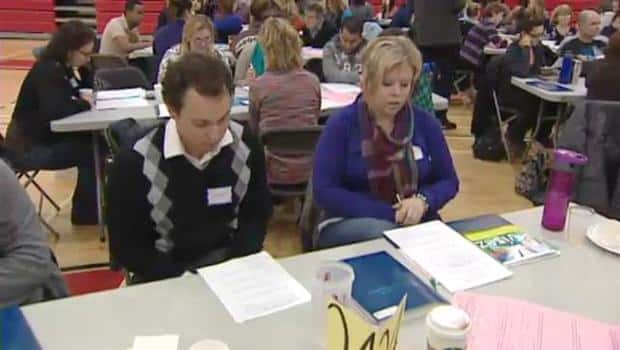 French-immersion interest on the rise in Winnipeg

Tougas said he attended the conference Monday to learn how to encourage his students to speak French outside of class.

"In the hallways it’s a mix of English and French kids, so to make things easier they will default to speak in English," said Tougas.

Tougas is among a growing number of teachers who teach in both French and English.

"We're always on the lookout for new graduates and for new people coming into the province that have teaching degrees because we could always be hiring," said Pauline Charriere, a French and languages consultant with the Winnipeg School Division.

Manitoba’s first immersion school opened its doors in 1973. Today, there are 15 schools that offer French immersion in the Winnipeg School Division, with an enrolment of nearly 4,000 students.

Provincially, there are more than 20,000 French-immersion students — a large market for prospective teachers.

"I know U of W, U of M and my own USB are all really heavily recruiting and promoting, and kids in high school are starting to think, 'Yeah, I could teach French.'"

Baranowski said her class had double the amount of prospective French teachers this year compared to last year.

"There's a real appreciation for the fact that we are a bilingual country. Parents want their children to not only have their first language — whatever it may be — but English and French as well," said Baranowski.