Fort Whyte is gearing to up to launch an outdoor forest and nature based school.

'It's a concept that's been very popular over in Europe,' says Jody Watson of FortWhyte Alive 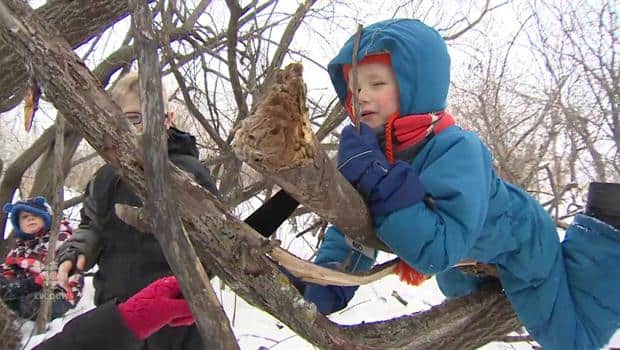 5 years ago
1:51
FortWhyte Alive is gearing to up to launch an outdoor forest and nature based kinder-school. 1:51

FortWhyte Alive is gearing to up to launch an outdoor forest and nature based kinder-school.

Kids will ditch desks for tree stumps, the schoolyard for FortWhyte Alive's woodlands and a traditional curriculum for 'inquiry-based' learning.

"It's something that's been around for decades over there, and it's really starting to gain in popularity, especially as, you know, children are starting to spend more and more time inside."

Watson recently received a practitioner certificate from Forest School Canada in Canmore, Alta., and has teamed up with Red River College's early education program to introduce a nursery school pilot program this fall that will have children spend their time outdoors.

"It would be a completely different learning environment not having those bookcases for the kids to access, or glue and sparkles and all those kind of things for crafting," she said.

"It's using what we found in the outdoors as our learning tools."

The 12-week pilot will see four-year-olds spend two mornings per week in the forest school.

The school will focus on connecting children with nature and fostering learning through exploring and play.

"This kind of program really focuses on allowing the children to improve their problem-solving skills.… We're really setting them up to be individuals and getting to steer their own learning course a little bit."

Fort Whyte has been working with children at Seven Oaks child care centre to iron out the details before the pilot program launches. Watson said children get off the bus and head straight for the forest with their backpacks.

"Once they get there, they find a little tree stump that we've got cut up for them, and everybody makes a circle," she said.

The children then conduct a site assessment to look for any dangers in the area before they set out to explore for the day with her, the teacher and an early childhood educator, Watson said.

FortWhyte Alive's pilot program will join a growing number of nature-based nursery and kindergarten programs across Canada and countries such as the United Kingdom, Australia and New Zealand.

There are at least 14 nature-based schools in the country, Forest School Canada officials said.

"I think it benefits children on so many levels," said Enid Elliot, an early childhood education instructor at Camosun College in Victoria, B.C.

Elliot has spent the past four years studying the influence of the outdoor, natural setting on children at an outdoor kindergarten program at a school in Sooke, B.C.

"They're so engaged in such a holistic way, because they're walking and they're feeling and they understand because they see and feel and hear," she said, adding she was especially intrigued by the way children learned to evaluate risk and build a strong community.

"A community that I think is formed in a different way than when they're in a classroom," she said.

"I think of a little guy last year who anyone seeing him would have thought, kind of a clumsy guy, not really cheerful. He certainly wasn't going to be on anyone's football team necessarily but, you know, that guy was the guy that could get to the top of the tree fastest, and everybody in the class knew that,"

"And I just thought how great to have many more identities for children available."

In the Sooke school's first year in 2012, it reported only a few minor injuries, such as scrapes and bruises and four bee stings.

Children also learn indigenous teachings about the land and have plenty of time to enjoy play, Elliot said.

Yurts and quinzhees in cold temperatures

While students in B.C. are outside rain or shine, in Manitoba, Watson said students will be outside in the snow and cold temperatures.

"As the program evolves, we're looking at developing maybe some little yurts that can provide shelter for us during some of those –45 days but also just using the landscape itself," she said.

"On a day where it's cold and windy, we'll probably hunker down in the forest and possibly build quinzhees," she said, adding children's safety is the top priority.

Registration for Fort Whyte's forest school pilot will begin at the end of May. The pilot will have a maximum of 10 students, and they have not worked out a price, Watson said.

Watson and another early education teacher will lead the program.

She hopes to have it permanently established by the time her one-year-old son is ready for nursery school.

"It's important for our family to spend time connecting with nature and for his generation," she said.

"We need to be establishing those connections to the environment, because it is essentially what sustains our planet and sustains our species. Creating that connection with nature is just going to promote sustainable living for the next generation."

Fort Whyte's long-term goal is to turn the pilot into a full-day, year-round program for nursery and kindergarten students.