After two decades of representation by a single councillor, seven candidates, including a city planner, a yoga educator, a school board chair and the head of a business improvement zone, are running in Fort Rouge-East Fort Garry.

After two decades of representation by a single councillor, seven candidates — including a city planner, a yoga educator, a school board chair and the head of a business improvement zone — are running in Fort Rouge-East Fort Garry.

Home to almost 50,000 people, the ward winds down from The Forks, through to West Broadway, Armstrong's Point, Corydon and Osborne Village, stretching out from Stafford Street and Pembina Highway to the Red River and ends at Crescent Drive.

Sherri Rollins, a school trustee and chair of the Winnipeg School Division, said Fort Rouge-East Fort Garry has a reputation for electing "mind-blowing leaders." Prior to Gerbasi, the ward elected Glen Murray before he went on to become mayor.

"[Those are] big shoes to fill," Rollins said on the campaign trail in South Osborne Friday.

"That's why you find me at the door, knocking and asking folks to send me to city hall."

Rollins, who was endorsed by Gerbasi, is the only candidate who has elected experience. Her first successful campaign was in 2014 when she was elected as a school board trustee for the Winnipeg School Division which she now chairs.

Like most of the other candidates running in the ward, Rollins said reducing crime would be her primary focus if she is elected on Oct. 24.

"Every third door you knock on community safety is an issue, whether it is crime or whether it is meth and addictions," she said.

The former computer operations supervisor now works as a labourer with two companies. An organizer with the Ironman Outdoor Curling Bonspiel and Toastmasters International, he is an avid volunteer at a number of festivals and sports events in Winnipeg.

"I'm running for city council to make a positive difference for everybody," he said.

Attended a <a href="https://twitter.com/FruitShareWPG?ref_src=twsrc%5Etfw">@FruitShareWPG</a> meeting last night at Fort Garry Community Center. Thank you for all the helpful information. Was good to meet everyone and thank you for making a positive difference in our community. I support community gardens and food sharing. <a href="https://t.co/nArXQ7ZfYX">pic.twitter.com/nArXQ7ZfYX</a>

Harry Wolbert is hoping a fifth attempt at public office will be the charm — his previous four attempts have ended in defeat.

Wolbert, who ran for the Manitoba Liberals twice and for city council in St. Vital, aims to help lift people out of poverty if the people of Fort Rouge send him to city hall.

He said he would balance city books by cutting arts and culture funding, ending any future rapid transit development and keeping Portage and Main closed to pedestrians.

"Some tough choices have to be made if we really want to help the poor," he said.

To deal with crime, Wolbert said Winnipeg police should be given "all the resources that they need to keep us safe."

For fellow candidate and fellow Liberal Peter Koroma, the solution to rising crime rates in Winnipeg is addressing the problem from a social approach.

He is advocating for a safe injection site downtown and more public housing.

Koroma immigrated to Canada from Sierra Leone in 1980. He worked for former Manitoba Liberal leader Jon Gerrard for several years and is now retired.

Speaking with Wildwood voters on their doorsteps on Friday, Koroma said Winnipeggers are scared the city will one day look and feel like Vancouver's Downtown Eastside, an area which has long struggled with the challenge of injection drug use and poverty.

While Meilleur was endorsed by the United Fire Fighters of Winnipeg, she called Gerbasi's endorsement of Rollins "union politics 101" in a campaign release.  The Winnipeg Labour Council endorsed Rollins and, previously, Gerbasi.

"I represent the new and the better and the fresh voice," said Meilleur on Friday.

"Our crime is out of control both petty [and] major crime. Addictions is completely crazy."

Meilleur established a foot patrol group in the Osborne Village area this spring in an effort to make the area feel safer and discourage crime, she said.

"The program has flourished, it's wonderful and it's ready to roll out into other areas of the city because of the way I built it," she said.

Meilleur blamed Gerbasi for not supporting her neighbourhood watch approach — something Gerbasi denies.

"We had little to no support from Jenny Gerbasi, our city councillor," Meilleur said. "I managed to sit down with Mayor Brian Bowman and between him and I, he was able to give us $30,000."

Gerbasi disputes this and told CBC on Monday she facilitated Meilleur's meeting with Mayor Brian Bowman, which led to the $30,000 grant to pay for the patrol. Gerbasi said she attended the meeting as well and that afterward she and Meilleur high-fived.

Bryanna Spina, who trains teachers how to bring yoga into the classrooms, says greater community inclusion would go a long way in addressing the city's social ills.

"Communities want to feel safe and they want to feel connected to the city," she said. "I have a lot of passion for my community — the green spaces, the community centres."

Spina said if she were elected, she would seek more funding for youth outreach programs and see the city work more closely with private contractors to protect the Winnipeg's tree canopy.

City planner Jeff Palmer, endorsed by New Democrat MLA James Alum, is also concerned about healthy neighbourhoods. He has been advocating for years to see the Rubin Block, a boarded-up building in South Osborne, revitalized.

Across Fort Rouge-East Fort Garry, he said, there are many buildings that are sitting derelict and abandoned — becoming blights in otherwise prospering areas.

Palmer, who lives in Riverview, is calling on voters to consider supporting councillors who have lived in the ward for a long period of time. He said many of the issues facing Fort Rouge-East Fort Gary are not new issues.

"My background as a city planner is to try and encourage transparency, collaborative discussions and acting in good faith," he said.

Palmer, Thompson and Spina are the only candidates who have lived in the ward for years.

Stephanie Meilleur said she has rented an apartment in West Broadway for seven months and also resides in Warren, Man. Sherri Rollins lives a couple of blocks away in Crescentwood, Harry Wolbert lives in North Kildonan and Peter Koroma lives in St. Vital. 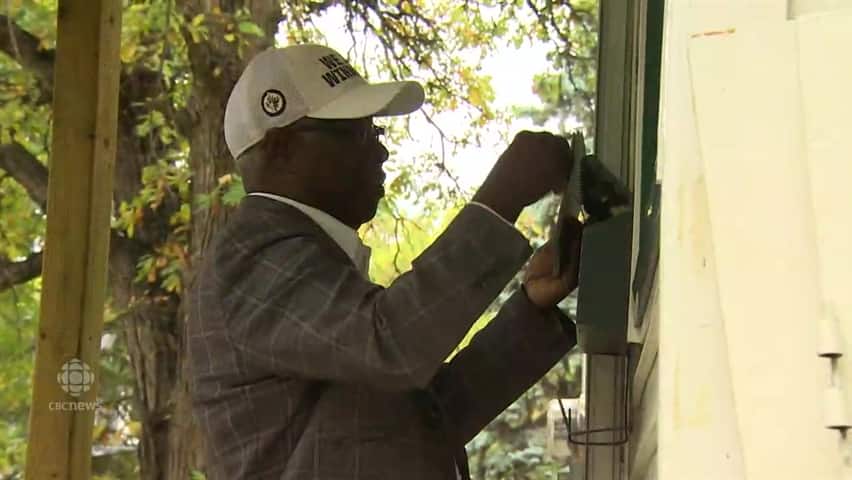 The race in Fort Rouge-East Fort Garry is heating up

2 years ago
2:22
There are seven candidates running in the ward that is home to almost 50,000 people. As they canvas door to door, violence and theft are top concerns for voters. 2:22
CBC's Journalistic Standards and Practices|About CBC News