The city of Winnipeg is in the middle of a forest tent caterpillar infestation, says a University of Manitoba entomologist. 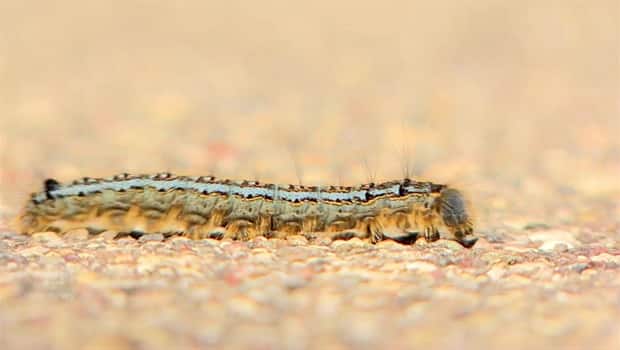 Rochon says forest tent caterpillars typically infest the city once every 10 to 15 years, but when an infestation hits, it can last two to three years.

The caterpillars started showing up in certain areas of the city last year, and this year they have been spotted in many corners of the city.

"Now we see them pretty much all over the place. We are in the middle of it. You should expect some also next year, probably not that many but some," said Rochon.

Bill Olynyk is noticing the pesky caterpillars. After the city sprayed the boulevard in front of his Garden City home last week, he spotted the caterpillars in his backyard.

Olynyk has a large garden and three older trees including one apple tree in his backyard. He feared the infestation could damage the health of his trees.

"I thought that they would be eating all the leaves and they would be crawling everywhere and I didn't want that because the summer is so short," Olynyk, adding one of the trees is quite old and that he didn't think it could handle having leaves eaten away.

Olynyk says he pulled a nest of worms out of one his trees and that there were hundreds of little worms inside of it. He was pulling worms off of the tree by hand before deciding to buy malathion and spray the trees to get rid of the nuisance insects.

"There were hundreds on this tree. They were on the bark everywhere in clumps and then that's when I decided to spray them," said Olynyk.

Olynyk climbed onto his roof to spray the chemical onto the tops of the trees and says he hasn't noticed many of the caterpillars around since.

City officials have already said they expect a "significant amount" of caterpillars this May and June. City crews started spraying against the caterpillars two weeks ago.

Homeowners can apply for a 30-metre buffer zone if they don't want to have the organic BTK spray used on their property.

One major retailer in Winnipeg is sold out of BTK but expects more in this week,